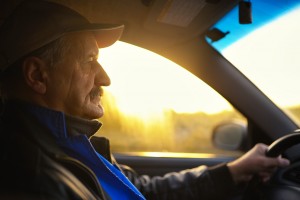 Age 70 may be the new 50, but 80 is still 80, a major marker on the aging scale, particularly in Ontario and the other Canadian jurisdictions where 80+ seniors must pass a test before they may renew their driver’s licence.

The official word from the province’s Ministry of Transportation is that “Ontario’s senior driver programs aim to keep seniors driving for as long as they can safely do so.” The objective makes sense, but the implementation is not as obviously reasonable.

A case in point is the way the test was administered to my husband. When he took the seniors’ driving test for the first time in 2013, he sailed through the written component (then a knowledge test of driving regulations) and endured the 45-minute lecture without falling asleep. (For the record, that would have been instant failure, however boring the lecturer.)

His problem came with the vision test. He failed because he did not have the 190-degree breadth of vision expected of people with binocular vision. This is because he is monocular — the result of an accident when he was eight years old, which left him blind in one eye, but still with the req- uisite 120-degree span. He had driven without incident for over 60 years, but, apparently, the Ministry’s equipment or the individual using said equipment did not/could not make the necessary adjustment to test people with sight in only one eye.

On that occasion, he was asked to have his eyes tested by his own optometrist and issued a temporary driver’s licence until the result was received and accepted at Ministry headquarters. Problem solved. He continued driving safely until the next testing point.

After 80, Ontario seniors are issued a driver’s licence for two years only and reissue is subject to passing the Ministry testing program.The testing system changed in April 2014. The driving knowledge component has been replaced by a cognitive test (which has sparked some controversy and is being challenged as faulty). The questions now involve drawing a clock face and crossing letters off a list.The lecture and the vision test remain.

Once more, my husband had no trouble with the written component or sitting through the lecture. Once more, he hit a roadblock with the vision test, although, as advised by the Ministry, he had had his eyes tested by his optometrist within the allotted time period before the test and she had verified that he met the safe-driving requirement.

Because of the details she provided about her test results, the Ministry tester still insisted my husband take another eye test on site.As he is still monocular, he still did not meet the binocular testing level. The tester said a medical review would be required. Once a medical review is called for, no temporary licence is is- sued.

He was mailed a formal suspension of his driver’s licence, while the medical review was underway. This, he was told, would take 30 business days. That translates to six weeks in real time. Partway through this period (after he contacted his MPP) he received notice he should go for another vision test with his optometrist. The package of information was un- clear about whether he also needed his physician to sign a medical review form. To avoid further delay should this be called for — every new requirement sends the 30-day/six-week clock back to the beginning — he arranged for his GP to sign him off as well.

According to both his optometrist and his doctor, he is fit to drive. But, until he hears from the Ministry of Transportation, he may not get behind the wheel. And that, he says, has made him feel his age more than any age-related health issue ever could. Just as the new driver in his or her teens is thrilled to have access to wheels, so the senior whose independence is snatched away is correspondingly depressed.

It is likely my husband’s driving privileges will be reinstated after Ministry officials finally complete the medical review — this time. But, un- less his handicap is accommodated (and government authorities do have a duty to accommodate), his problem could recur next year. (After a call for medical review,the vision test requirement must be repeated annually.)

The problem appears to lie not with the principle behind the testing program, but with its implementation. It seems there are a number of issues surrounding the quality of the equip- ment, the knowledge of the operators, some of the test questions and the snail-like pace of the bureaucracy. Now is the time to inject a little humanity into the process and recognize that losing one’s driver’s licence for any length of time at any age affects quality of life and independence, particularly for people in rural areas.

The long-awaited decision regarding my husband’s driver’s licence finally arrived, 70 days after he had taken the seniors’ driving test. At first glance, it sounded like good news.

“I am pleased to advise you that your vision waiver application pack- age has been approved,” states the letter from the Ministry of Transportation.

But that was not the end of the matter. The letter continues: “You may now proceed to stage two of the assessment process.”

This was the first intimation that there were to be more hoops to jump through.

“The second stage of the process is a formal driving evaluation con- ducted by an occupational therapist,” continues the letter. “The purpose of the evaluation is to determine if you can adequately compensate for your visual field loss and drive safely.”

Surely the favourable reports from the vision and medical specialists had already answered this question. Apparently not in bureaucratic- speak.

The mandatory next level of testing, estimated between three and four hours, costs anywhere from $400 to $800 and above, and, warns the documentation, the sum is not covered by either the Ministry of Trans- portation or OHIP.“The fee includes the services of an occupational ther- apist and a driving instructor, the use of the vehicle, the associated insurance costs and the preparation of a detailed report.”

Will there be yet another previously unrevealed mountain to climb after this?

Once drivers reach 80 years of age, every two years they must:

• Complete two, brief, non-computerized in-class screening assignments. • If necessary,take a road test.
• An existing and valid licence will not be revoked, but all requirements must be met before the licence is renewed.