Linda Lundström began sewing when she was a pre-schooler. Today, the Ontario-born icon of Canadian fashion, who went on to study in Europe, is one of the well-recognized brands in fashion.

“From the time I was three, my mother let me play with her sewing machine,” says the award-winning Canadian fashion designer.“She saw me trying to make it work,so she took the needle out and let me use the machine.

“Letting a little kid play with her prized possession was a real concession, but that was the kind of person my mother was,” adds Linda.“Her view was that if you wanted to do something, you should try it,for who knew what it could lead to.We had a lot of freedom that way as we were growing up.”

Her mother’s wisdom had a practical result. Linda sewed her own outfits to go into Grade 1,and her interest in sewing continued to grow.When she turned 12 in 1964,she even received her own sewing machine as a birthday gift. “But before my mom gave it to me, I had to promise her that I wouldn’t get married until I was at least 25,” recalls Linda. “She really thought that women should have a career of their own.” 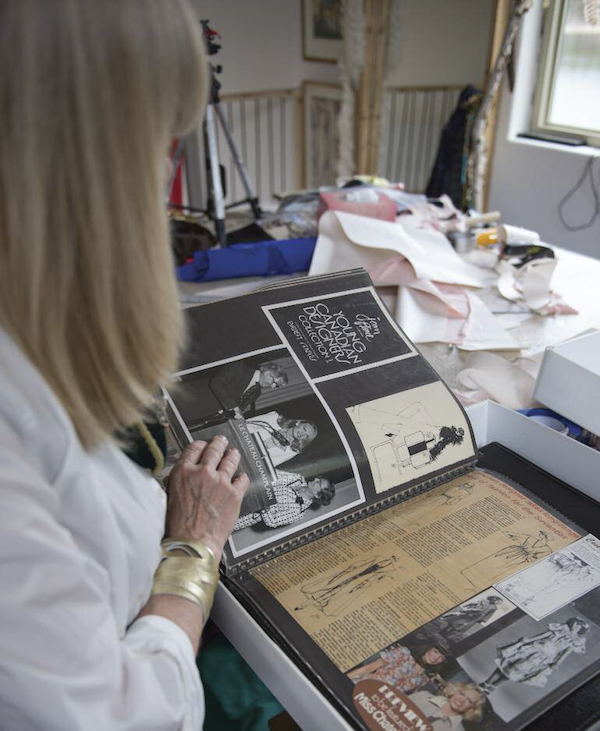 Her mother had a career as a cook for the miners in the remote northern Ontario gold-mining town of Red Lake. “She worked where all the men came to eat,” says Linda. “My dad followed her up there to marry her and was working in the mines. Her recipes were for large quantities. I have memories of a whole kitchen table full of cinnamon buns that we would take to the neighbours.”

The lifestyle and her upbringing were unusual, admits Linda, who grew up in Cochenour — a hamlet with a population of around 200, 17 miles (27 kilometres) from Red Lake.

“At least it was 17 miles in the summer,” says Linda. “In the winter, we went across the frozen lake, so it was less. It was the sort of place you want to be from.” The remoteness and the very few places to shop in the area — “Red Lake had a small Hudson’s Bay store, a bank and a grocery store and that was about it,” says Linda — gave her more time to sew. By the time she was 12, as well as making clothes for herself, she was sewing for other people.

“When my girlfriends and I would go to the dance in Red Lake, I would make us matching bell bottoms,” she recalls. “Then somebody would find out I sewed and would ask me to sew for them.”

Aspects of her northern heritage are reflected in the designs for which she was to be-
come famous later. For example, her acclaimed LAPARKA — a three-in-one woolen duffle coat with removable fur-trimmed sleeves and hood and a separate nylon shell, which could be worn over the top — was among her most successful early designs, with more than 125,000 of the coats sold across North America and Europe.

“I took my Canadian heritage and drew inspiration from the Inuit, and combined it with my Scandinavian heritage and used the principles of layering against the cold, together with bright decorations,” says Linda, whose background is Icelandic and Swedish. Her father was born in Lapland, which explains the origins of the LAPARKA name. She also chose to pay tribute to Aboriginal peoples through many of her designs. “They made up the majority of the population around Red Lake,” she says. “But the gold rush and the gold mines on indigenous land went ahead with virtually no regard for the impact on First Nations people.We lived amongst them, but there was a certain amount of segregation and racism as I was growing up. I realized it was wrong, but I didn’t have the courage to do anything about it then.” However, she says, since then she has tried to make up for the past. “I have been very involved in paying tribute to First Nations peoples and culture in later years. It is my way of making amends.This is why I collaborated with First Nations artists by appliquéing their art onto my LAPARKA. I also worked with native artists in making printed fabrics and with a group of women, the Niichikwewak leaders, who made beautiful beaded accessories,to co- ordinate with my collection. My goal was to create an economic activity and value for the beautiful work that was being done in my hometown.”

She had first become aware of the beading artistry and the mukluks and moccasins made by Aboriginal women in the North when members of the community came to buy fabric from her mother.

“My mother ran a fabric store in our basement,” she recalls.“The only other fabric store was 150 miles [241 kilometres] away and people came from all over the North and from the reservations. They had to fly to Red Lake and then take a taxi to Cochenour.”

The basement store soon became a mini trading post, selling fabric and taking orders from local people for mukluks, moccasins and gauntlets custom-made by the First Nations leather workers and beaders. “I grew to respect the beautiful work and the dexterity of the hands that made those wonderful products,” says Linda, who received the Order of Ontario in 1995 and a Queen Elizabeth II Jubilee Medal in 2012.

Her continuing connection with Aboriginal peoples also led her to use fur and leather in many of her designs. “This was a time when the anti-fur movement had had a devastating effect on the North, as the demand for real fur diminished and trappers were getting “next to nothing” for their pelts. A group of trappers from Red Lake approached me and asked me to use real fur in my designs.”

She made a commitment to support them and as a result was targeted by animal rights groups, and even received a number of death threats. Despite the hostility, she did not change direction.

“I continued to use fur despite the threats and now the anti-fur movement seems to have fizzled out and fur is in again,” says Linda. “I am probably not going to change anybody’s mind — nor do I want to. I’m an environmentalist and I express my beliefs by using fur.”

In her most recent presentations, her L collection features “leather and fur accessories in a range of styles, with each one-of-a-kind piece handcrafted in Canada from unique pelts and skins.”
Before this latest incarnation of Linda Lundström designs, Linda had to weather a major business crisis. After some 34 years of successfully running her own company, she faced bankruptcy.

“That was in 2008, at the very beginning of what would turn out to be a world financial crisis,” she says. “We had been profitable for 28 years.Then the bank decided to call our loan.We lost our taste for putting everything on the line and then having somebody on Bay Street pull the rug out from under us like that. After careful consideration, my husband and I decided we would just close down.

“In hindsight,” she adds, “having had several years to process everything that happened, I had really accomplished everything I set out to do.”

At every stage,she explains,she looked towards a bigger plan.When she was making her own clothes, she knew she wanted to sew for others too.When she attended Sheridan College, her plan was to design and manufacture clothing.

“Then, after studying pattern making and everything else I needed to know, I had a bigger plan again,” says Linda, who has been awarded three honourary doctorates during her career. “I didn’t just want to sew. I wanted to be a fashion designer. So I was always thinking ahead and creating a bigger vision.

“I wasn’t that good at designing at the beginning, but I felt I could get better,” she adds. “I wasn’t a designer because I never sketched anything. That came later, after going to Sheridan. But I was really a good sewer and I loved cutting fabric and loved experimenting.”

When Linda set up her company in 1974, she ran it out of a two-bedroom apartment. “But I imagined some- thing much bigger,” she says. “When I moved from the apartment to a 3,000-square-foot [279-square-metre] loft off Spadina, I knew I was one step closer to my vision, and that it wasn’t the end. I visualized having a state-of- the-art sparkling factory. I achieved that. I created it and made it a reality and by 2008, even though I felt there was more for me, I decided to walk away. Maybe God had another plan for me.”

At the same time, a buyer came forward to purchase the company and brand. That company was Eleventh Floor Apparel, which retained Linda as chief creative officer.

“But it was their culture, their company,” so she left “to contemplate the next move.”

“That involved trying a lot of different things,” says Linda, including being honourary patron of the Christian Children’s Fund of Canada’s Transform Communities Campaign. “I taught at George Brown College. I did consulting. I gave workshops on Lean Manufacturing. My husband and I moved to
our cottage north ofToronto. We lived in that uninsulated cottage
with a wood stove for four years. Now, we have just built a new home on the property. But it was wonderfully healing to be in nature.

“I had turned off the adrenalin drip I had been on for 34 years and really started to recover from the trauma of losing my company,” continues Linda, who has two daughters in their 20s, one a fashion director for a New York magazine and the other a graphic designer also based in New York. “At the same time, I realized I wasn’t finished as a designer, but I didn’t want to have to please sales agents and retailers or have the responsibility of having 150 employees. I loved having a community of people who worked together every day, but I didn’t want to do it again.”

The next stage of her recovery was to decide what she would enjoy doing. “I really loved working with fur. I also found myself experimenting with leather and, in 2011, it had developed into a 22-piece collection.”

She called the collection L, and her newest version of Linda Lundström designs was born. “L could be the Roman numeral 50. It could be the French Elle, or it could stand for my name,” says Linda.

Today, she works from her home studio with her husband, Joel Halbert, by her side. “I married him, had his children, then I asked him to come and work with me,” she jokes. “He didn’t say yes right away either. He had a career and really liked his job, but he understood that I needed someone on the financial end of things that I could trust. We’re a good team.”

Linda also has a more direct connection with consumers these days, through shows such as One-of-a-Kind, and frequently runs pop-up shops that are customized shopping opportunities for special groups or meet- ings where Linda interacts directly with the shoppers.

“I used to have commissioned sales agents who sold my collections all over North America. Now, it’s much more personal. I am meeting the people who wear my clothes,” says Linda. “I love women with geography to their bodies. I am inspired by real women to make things that are relevant, current, modern and fashionable without making them feel judged by size, height or income. The things I am making now are body-skimming and the look is very forgiving.”