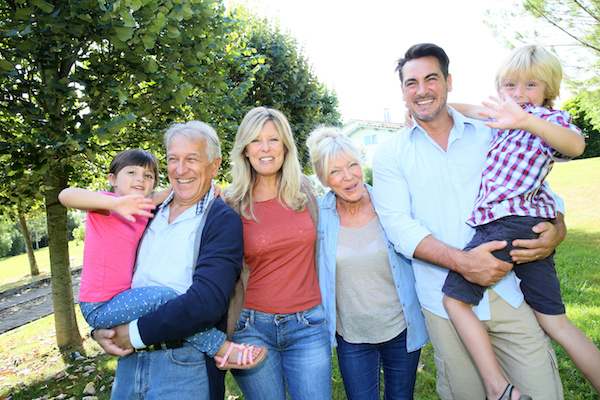 Are you a step-grandparent? If so, you’re certainly not alone. These days, family trees are pretty “bushy.”
Popular television shows such as Modern Family and the Brady Bunch have brought the dynamics of stepfamilies into mainstream pop culture. However, as families become increasingly diverse and complex, defining family relationships remains a tad tricky.
Now, researchers from the University of Missouri’s College of Human Environmental Sciences and Sinclair School of Nursing are shedding new light on what happens within a family when the step-grandparent had no active role in raising the parent of the step-grandchild.

If you became a step later in life, after the children were grown, or if you became a step in a dynamic that didn’t involve childrearing with your significant other, there’s naturally an impact on your role asp-grandparent. But it doesn’t mean you can’t have a close connection.

“In our research on families, we had theorized that there were three distinct types of step-grandparents: long-term, later life and inherited,” said Marilyn Coleman, Curators’ Professor of Human Development and Family Science. “However, we now have found that a fourth pathway to becoming a stepgrandparent exists. In cases where step-grandparents did not help raise their step-grandchildren’s parents, but have been in the lives of step-grandchildren from birth or early childhood, the grandparent role, in essence, skips a generation.”

Coleman, along with Larry Ganong, co-chair of the Department of Human Development and Family Science and Ashton Chapman, a doctoral student at MU, examined 35 relationships involving skip-generation step-grandparents. They wanted to understand what determines strong relationships in a blended, multi-generational family.

“When it comes to family, norms and obligations matter,” Chapman says. “Understanding who is supposed to do what and how family members are identified affects the family dynamic. If the step-grandchild knows from day one that a step-grandfather is simply grandpa, his role will be more important in the child’s life.”

“Relational ties in stepfamilies can be convoluted and difficult to navigate,” Ganong adds. “Yet, established boundaries and understanding can strengthen family bonds, even when the family tree looks more like a family bush.”

The study, Like My Grandparent, But Not: A Qualitative Investigation of Skip-Generation Stepgrandchild Stepgrandparent Relationships, recently was published in the Journal of Marriage and Family.