Each species has its preference 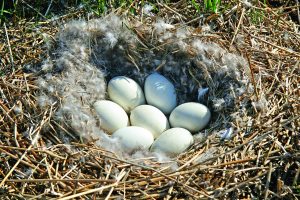 When we think of a place to call home, we have a long-term outlook that may extend for many years. Birds, however, have a much shorter time horizon. For the common Yellow Warbler, that may be as little as three weeks from the time the nest is constructed until the young have fledged.

At the other extreme is the Bald Eagle. If the pair is building a new nest, which could take a couple of months, it may be a full six months before the young are taking to the air. Usually the larger the bird, the longer the period.

Nests are built to ensure that parents have a secure location to rear their chicks before they are old enough to fly. They come in a wide range of shapes and sizes using a variety of construction materials and for most species are only used for a single brood. There are, of course, exceptions. Robins may have several broods in a given year, using the same nest of grasses and mud lined with soft materials, but it is not reused the following year.

Birds that nest in cavities may reuse the sites year after year, either removing unwanted material from the previous year or adding more on top. This is also true of species that use nest boxes. House Wrens build a stick nest that over time can become so jammed that the birds cannot enter the entrance hole. It is best to completely clean out your boxes at the end of each nesting season, so your new tenants have a fresh start. 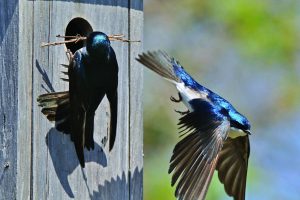 Limiting use of natural nests to one year is true for most birds for very good reasons. Over the winter, nest material deteriorates, often to the point that the nest disappears, so rebuilding is essential. For those that survive, the nest will have undesirable remnants from the last season, so it is better to start fresh.

There are exceptions and that includes more durable nests constructed mainly from sticks. Great Blue Herons nest in colonies and have large nests set high in dead trees, either in swamps or on islands. Birds return year after year with sites being occupied on a first-come, first-served basis.

Sometimes, a Great Horned Owl will choose one of these nests and since it begins six to eight weeks before their arrival, it will definitely be first in line. Crows have much smaller stick nests, which can last for several years and may be selected by hawks in subsequent seasons.

The granddaddy of them all is the Bald Eagle nest. Because they add one to three feet of material each year, they can become massive over time and weigh over a ton. They can be two to four metres deep and two metres wide and have been known to collapse during violent windstorms. 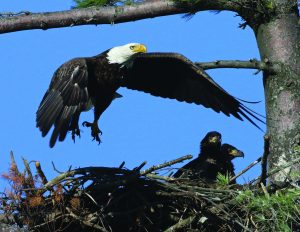 When it comes to unique designs, there are a few standouts. Baltimore Orioles build a hanging nest of long grasses, rather sock-like in its structure. Willow trees are favoured because of their long drooping branches. The Ovenbird, a warbler, constructs a domed nest of woven grasses on the forest floor. This oven like structure has a side opening, giving rise to the bird’s name. Then there is the Chimney Swift, a species that typically builds its meagre nest on the inside wall of a chimney, affixing small twigs to the side with its sticky saliva. Smallest of them all is the nest of the Ruby-throated Hummingbird, a toonie sized structure made of soft plant material, woven with spider’s silk, covered with lichen for camouflage and secured with silk or evergreen resin to the top of a slender branch. It is a marvelous construction.

We have all seen tree nests, but ground nests are quite different. The Killdeer nests on the ground, often on a gravel surface, merely clearing out a small depression for eggs. It relies on camouflage for protection rather than cover. Canada Geese build in a variety of semi-open habitats because they like to see what’s going on. A simple gathering of plant material lined with down will do. Old muskrat feeding platforms in a marsh are ideal. In fact, most waterfowl nest on the ground or on mats of vegetation in wetlands.

An exception is the Wood Duck. You can be walking through a woodlot and have one leave a nest cavity high in the trees. When the downy chicks have hatched, they drop to the ground, perhaps 25 metres below, bouncing upon contact. When the last one has descended, they all follow mom to the nearest water source. It is quite a sight.

One thing to remember is to protect nests from disturbance. If you spot one that is hidden, don’t linger so the birds can safely get on with life. After all, they have a busy schedule ahead.