To say this is a busy time of year for birds is an understatement. Most find themselves at some stage of the breeding cycle, whether constructing a nest, sitting on eggs or bringing food, from morning until night, to hungry chicks that have insatiable appetites. 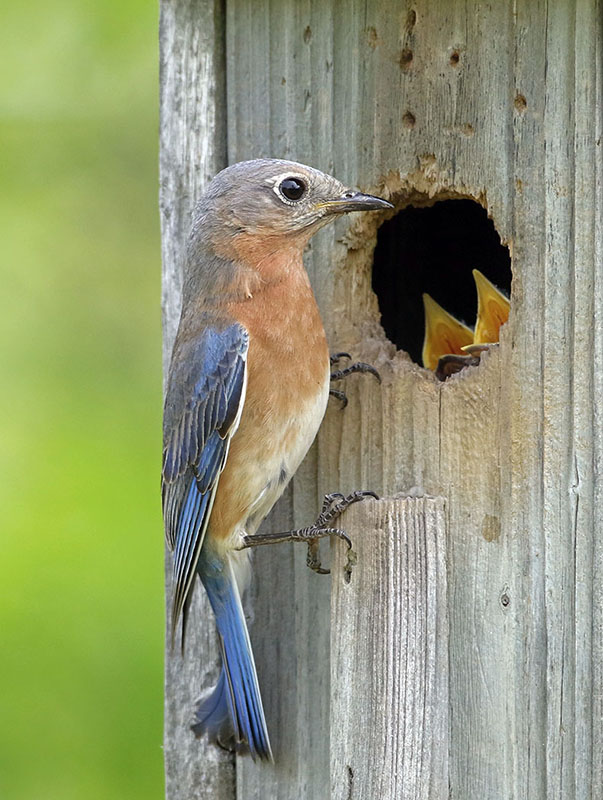 Incredibly, songbirds like warblers, wrens and thrushes will be out of the nest in only two to three weeks—some in as little as 10 days. They will still need time to master flight skills and learn to feed and protect themselves but at least they will be safe from predators intent on robbing the nest. At the other extreme, it will take 10 to 14 weeks for young bald eagles to fly. Unlike other birds that abandon their nests, though, these juveniles will return on their own to home-base for a while. The parents know when it is time for their youngsters to make
their way in the world and will encourage flight by slowing the feeding intervals, then stopping their meals altogether.

A significant number of birds rely on insects for food so having a ready supply of protein available for hungry mouths is essential. In the early part of the season, many insects are in the larval or caterpillar stage, which suits the needs of most small birds. Swallows, on the other hand, get their food on the wing so when unseasonal cold weather sets in it can have a serious  effect on the chicks. Late-season cold spells are not unheard of and insects do not fly in those conditions because unlike
birds, they need the air and the sun to warm them first. If the air is too cold for a couple of days, the chicks in the nest will be slowly starving and by the third day, both the chicks and the adults may have perished. That has happened in recent years with both tree swallows and purple martins 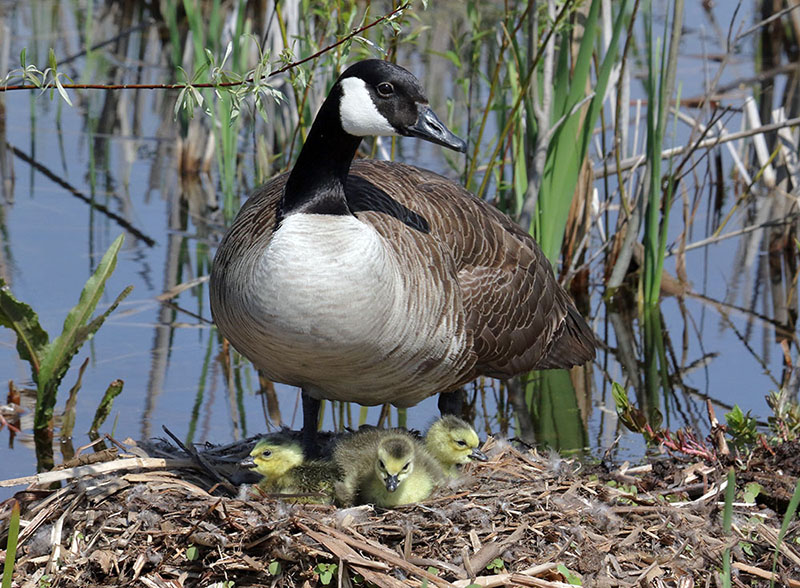 If you eat fish, however, cold weather is not a big issue. Herons, rails, ospreys and kingfishers all rely on an aquatic food source and their supply does not run out. The same goes for hawks and owls; they need small mammals, amphibians and birds for their young. It is even easier for ducks and geese because aquatic and land vegetation is readily available.

Not all birds follow the same schedule when it comes to breeding, however. Some birds that arrived in April have successfully hatched their brood already while latecomers like flycatchers have just established territory. In the case of robins and eastern bluebirds, there can be more than one brood per season, with extremes of three and even four possible for robins. It’s no wonder they are so numerous.

When it comes to establishing a place to raise the chicks, the variety of nest types is considerable. We have all seen small, single-use nests of woven grasses attached to bushes, typical of warblers and sparrows. There are larger stick nests built by crows and hawks and very large nests of ospreys and eagles. The latter will add a few branches each year, sometimes erecting huge structures weighing hundreds of pounds.

Robins will build a nest of mud and grass in evergreens, above a porch light or even on a front door inside a hanging wreath. You can just imagine the challenge of getting into the house. Chimney swifts create a semicircular nest of small twigs held together by saliva and stuck to the inside of a chimney wall, hollow tree or cave. Orioles build a nearly enclosed, sock-like grass nest suspended from a drooping deciduous tree branch and then there are the Carolina wrens that take advantage of whatever structure is available. In our yards that can include an empty flowerpot, a discarded cardboard box, an unused barbecue, the top of a propane tank, a tin can or even an old shoe or boot. They are big on repurposing.

When it comes to luxury and simplicity, waterfowl have the market cornered. A simple ground nest lined with down feathers provides comfort for the mother and warmth for the eggs. The nest is abandoned after the downy chicks hatch, ready to brave the world within hours.

The final major group of nest sites involves holes, which is why nest boxes are so popular with birds like swallows, house wrens and bluebirds. In a natural setting, trees provide most opportunities for them, but these birds readily take to backyard bird houses. They aren’t fussy about design, which is more for you, as long as the entrance hole is the right size and the depth of the box is adequate. Search online to see what your desired tenants need for a home and habitat and enjoy watching the fascinating activity as new life emerges.