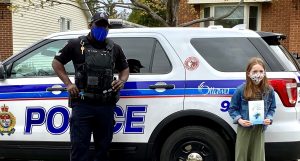 Although COVID-19 restrictions have changed the way we live, making times difficult for everyone and harming many businesses, others have been inspired to think creatively and start new projects.

One such project has resulted in several local young people becoming some of the youngest published authors in Ottawa.

It was creative thinking in August 2020 that led the Ottawa Police Blues FC and BAICO Publishing Ltd. to launch a writing contest for young people aged eight to 14. The result is a co-published 115-page book called Grow A Writer 2020, containing stories written by 25 local young people.

Sgt. Devon Archer, the Police Service contact, has been actively involved in community projects since emigrating here from Barbados in 1996. A member of the Ottawa Police Service for the past 12 years, he currently works with police community outreach programs like the Ottawa Police Blues FC, which was formed to help build positive relations with local youth and the police. Sgt. Archer explained that they wanted to do something positive for kids. As he wrote in the dedication at the beginning of the book, the contest “was launched to help our youth stay focused, positive and creative during a time when everything around us seemed so uncertain and at times scary.”

BAICO Publishing, a traditional publisher, began operations in 1997 in Gatineau, but is now located in downtown Ottawa. The company’s vice-president, Stephanie Bertrand-Asimov, is the inspiration behind the project. She echoes what Sgt. Archer said and wrote, adding, “We want to make a positive imprint on the youth in our company. The purpose of this project is to encourage children to be creative while staying safe during this pandemic and have a unique way of expressing themselves.”

Some of the winners 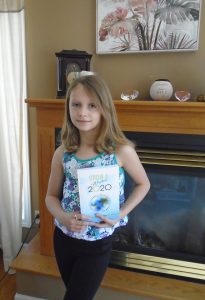 Ten-year-old Jessie Ann Anderson was one of the more than 50 young people who entered the contest. Her story, A Mermaid Lives Her Dream, appears on page three of the anthology. Jessie was encouraged to enter the contest by her grandmother, Alberte Villeneuve, a former teacher turned author and columnist. She lives with her parents, Adele and Vernon Anderson, in Vars, Ontario, where she is a grade four student at St. Guillaume school. Although Jessie is a talented enough writer to have her story appear in the book, she has also written songs—her goal is to be a singer, and she has already taken steps to make that happen. She studies singing at Sing House and has even performed on stage at the Shenkman Center four times.

Another contest winner is 10-year-old Kenzie Cousineau who lives with her parents in Orleans, Ontario, and attends Terry Fox public school. She admits the contest helped bring some excitement into her life during the pandemic. Her story, on page 91 of the book, is entitled The Great Escape. When she was interviewed by CTV News on April 28, she told the interviewer, Jackie Perez, that her story is “about some children who are being babysat and they steal the babysitter’s credit card and use it until it’s declined.” She also said she likes reading—especially adventure stories. Kenzie’s mother, Ashley, who was also part of the interview, added that her daughter “is always writing stories on any scrap pieces of paper she finds around the house.” 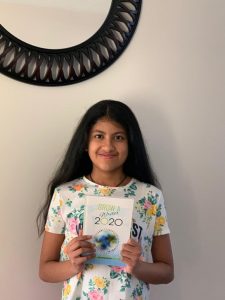 Journey To Space is the title of a story written by a third young writer whose story appears in the anthology. Twelve-year-old Urvi Chiruvella lives in the Kanata area of Ottawa. She is in grade seven at W.O. Mitchell elementary school, where she learned about the contest from her teacher. Urvi explained that her story, which you can find on page 35 of the book, “is about a teenage girl who wins a trip to space.” But her story also has a special message. “I tried to convey a message and awareness about space pollution,” she said. Urvi enjoys a variety of artistic endeavours like singing, dancing and drawing. She was just five years old when she won an RJ test in India that resulted in her hosting a four-hour long live radio show. Over the years, she has also won multiple chess tournaments, an App developer certificate for coding software applications like a database simulator and a chatbot, plus a Royal Canadian Legion poetry contest. Still, Urvi says, “I was very surprised that my story was one of the Grow a Writer contest winners.” When Urvi grows up, she says, “I’d like to explore the vast space and its secrets. I’d like to work with NASA and represent Canada on the space program. But since I also have a passion for writing, I’d like to write books in my spare time.”

Copies of Grow A Writer 2020 became available in March 2021, and Sgt. Archer hand-delivered a copy of the book to each of the winning contestants along with a letter that said, in part, “We
congratulate you on becoming a published author.”

“The project was so successful that all 150 books we ordered were sold quickly,” said Sgt. Archer. But Bertrand Akimov added that more books have been printed, and you can buy copies from the following sites — facebook.com/BaicoPublishing.com or ottawabluescharityclassic.ca/index2.php#!/Grow_A_Writer.

Because of the contest’s success and popularity, the producers have decided to make it an annual event. This year’s contest rules and invitation to enter was announced on April 26. So, if you have any children, relatives or friends aged eight to 16 (they raised the age limit this year), you can invite them to participate in the contest, which ends August 31. Details can be found at the websites mentioned above.

As with last year’s contest, all money raised from book sales will go towards a scholarship for a child in need.