By The Council on Aging of Ottawa: Patrick Curran and Peggy Edwards 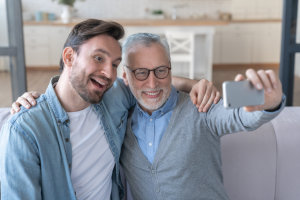 When I turned 55, it really bothered me. Age 55 was my threshold in the aging process. It was the starting point from reaching retirement age to what I expected would be my late in life ‘senile existence’. Prior to 55, I never thought of myself as an “older person”. Older persons looked old and wrinkly, told the same stories over and over again, and were more prone to get cancer, heart disease, dementia, and diabetes. In the upcoming dystopia of my aging, I was also expecting to experience frequent bouts of memory loss, irregular bowel movements, aching muscles, incontinence, and yes, the rapid depletion of hair! It’s hairy . . . NO! . . . I mean . . . it’s scary! You see, it’s now starting to happen to me!

Changing the way we think

There was a problem with my way of thinking. I was solidly programmed to think in negative terms about age. If I had not subscribed to the pessimism and stereotyping of aging, I probably would have had a positive outlook about aging at any age. My negative predisposition was a consequence of “ageism” which can be simply defined as prejudice or discrimination related to a person’s age.

While ageism is most often related to older people, this discrimination also applies to other age groups. Expressions such as “Stop crying like a baby!” or “Hey kid! You’re not even wet behind the ears” reference age as a determinant of ability, or a lack thereof, and do not recognize that every individual should be on an equal playing field regardless of age, sex, gender, race, ability/disability, culture, religion, Indigenous roots or nationality.

While there are universal human rights laws in place attesting to the equality and freedom of all individuals, sadly, such rights are not respected in many countries, including Canada. Discrimination based on age continues to be a serious violation of human rights.

The times they are a-changin’

Our aging population is growing disproportionately more than other age groups. By 2030, people over the age of fifty-five will represent over one-third of the Canadian population and will continue to grow larger.

Compared to previous generations, today’s older adults have a longer life expectancy, higher levels of education, more varied job and travel experiences, and a greater acceptance of social and sexual/gender diversity. So, there is good reason to be optimistic about the future.

Attitudes need to change in the way we think about older Canadians, and how older people think of themselves. But change is never something that should get looked at as it passes by. Change always needs a push. Older Canadians need to take stock of the progress we have made, how our growing population can influence change, and the areas that need investment, such as housing, health, income security, transportation, lifelong learning and social inclusion.

We can work to make change, say no to ageism, and continue this conversation through organizations like the Council on Aging of Ottawa (COA). For further resources and discussion about the issues raised in this article, please contact the COA (see box below).

The time to act is now.

Some Facts about Ageism

The COA is a bilingual and inclusive organization, made up of volunteers and staff, that works to advance the wellbeing of Ottawa’s older adults and to make Ottawa an increasingly Age-Friendly Community. For information on membership, volunteer opportunities, events, learning programs, and further resources on ageism: visit: www.coaottawa.ca or call: 613-789-3577.

Deloitte, 2022. Making Canada the best place in the world to age by 2030: A Senior Centric Strategy.

Lagacé, M., Mérette, M., Julien Navaux, J., Philippe Rodrigues-Rouleau, P. for the Federal, Provincial and Territorial Forum of Ministers Responsible for Seniors, 2022. An Examination of the Social and Economic Impacts of Ageism.

Revera and International Federation on Aging, 2013. Revera Report on Ageism.

TagsOctober 2022 The Council on Aging of Ottawa