They communicate in their own way 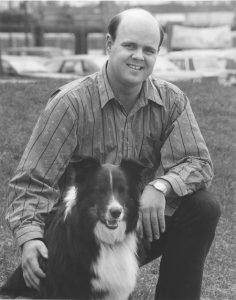 Even after 27 years, I sometimes think about Nevada Pup. I still have a clear recollection of the heart-rending poster explaining that he had disappeared when his owner’s truck was stolen, apparently with the dog inside. In response to the owner’s heartfelt plea, I called to ask for further details and to offer help with the search.

Glenn Marshall, who was in the Ottawa area visiting his parents, said that he had taken Pup with him on his shopping trip because he intended to spend only a few minutes in the shopping centre. But that short time was enough for thieves to steal his vehicle, which was later involved in a collision and dumped. (The driver jumped into the car that had been following the stolen truck —
presumably driven by the second thief — and the pair fled the scene.)

Pup was missing. Had the car thieves taken him with them or had they abandoned him at the shopping
centre or somewhere along the way? Was he all right? He didn’t know the terrain, so probably would not be able to find his way back to Glenn’s parents ’house after just a few days there.

“I don’t care about the truck,” said Glenn, who had spent most of his waking hours since the dognapping searching for his tri-colour border collie. “I just want my dog back.”

As luck would have it, two days later, I was at a different shopping centre — quite close to where the truck and dog had been snatched — and saw a tricolour Border Collie sitting outside one of the mall entrances.

I walked over and saw he was muddy and covered in burrs. I spoke quietly to him as I stroked him and called him by name. He looked up, alert now, rather than dejected. I beckoned him to follow me and he jumped into my car.

I still was not absolutely sure that this was Nevada Pup, so I waited to see if anyone seemed to be looking Listen to the Animals
They communicate in their own way for a dog. (I would have quite a bit of explaining to do, if my instinct was wrong and I had to return
him.)

A little while later, a rough-looking guy with long, unkempt greasy black hair, wearing black jeans and a black T-shirt tightly stretched over his belly, walked out of the mall. He looked around and whistled.

At that point, Pup, who had seemed fairly relaxed on the back seat of my car, ducked. Then, I was sure that I had the right dog and that black shirt — who, by this time, had shrugged and walked away — was not his rightful owner.

I drove to the nearest call box (there were still plenty of working phone booths half a century ago), called Glenn and asked him to speak to the dog so that I could gauge his reaction. A tail wag and a cock of the head as I held the receiver to Pup’s ear were confirmation enough for me.

Glenn was waiting in the driveway as we drove up. I opened the car door. It took just a moment for the dog to realize that his ordeal was over. He leapt in the air, overjoyed that he was back with his person. And I was almost as happy to witness the reunion and see their absolute delight at being together again.

I was also happy to have understood Pup well enough to bring him back to Glenn. I have always believed that we should listen to the animals. Their expressions, body language and reactions can tell us so much. In Pup’s case, he communicated his feelings as well or better than any dog I have known. His change of expression when he heard me say his name, his ducking to avoid being seen by black shirt and his joy at being reunited with Glenn told as much of his story as I needed to know.

Every pet owner knows the basics of animal communication. A dog standing by the door is a clear sign that he needs to go outside. And when he looks up at you with a pleading expression as you put on your coat, would his saying, “I want to come with you” make him any easier to understand? Then there is the play bow with rear end and tail held high and a smile on his face that says, “Throw that ball” or “Let’s play
now.”

Cats, especially my cat, are just as clear when they use different voices to ask for food, to go outside or when they chatter at a bird on the other side of the window. They have special purrs and body language to indicate affection and to ask you to make room on your lap for them to settle into cuddle time.

Anyone who has ever had the pleasure of connecting with their dog or cat learns to speak their language and understand their feelings by watching their expressions, the position of their ears, their body language and the many different sounds they make from contented sigh to warning bark.

Communication is part of the wonder of the companionship of a loving animal.