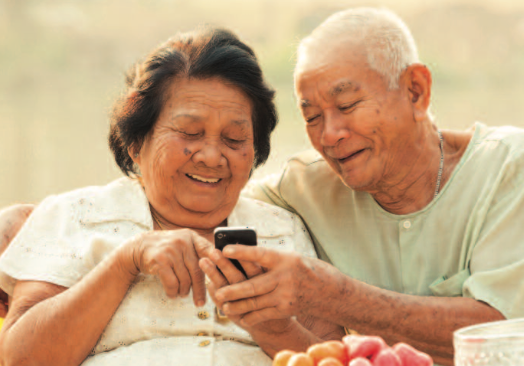 Looking into the future

It’s something you just cannot avoid seeing. Everywhere — whether it’s out walking around my town doing errands, sitting in my favourite café enjoying a latté and a muffin, on buses, in shopping malls, or relaxing in parks — I see the ever-present cell phone.

There is something very odd, don’t you think, about the fact that people today thrive on social media claiming they are keeping in touch with friends, yet, they do most of that ‘keeping in touch’ sitting alone at their computer or on their phones. It puts a little different spin on ‘hanging out together.’ I cannot imagine a romance carried on via texting. One cannot hug a phone.

I thought I was pretty “modern”. I made it through my first manual typewriter in 1957 — a lovely blue Smith Corona. I graduated to electric ones and finally computers. However, I absolutely refuse to get one of those up-to-date phones that allow you to text, call and take pictures and goodness knows what else.It concerns me that there is a prediction that soon land phones will be a rarity or gone completely.Yes, I have a cell phone — a 14-year-old one — and if that ever dies, I will not replace it.

Surely there must be negative aspects to our love affair with high technology. A radio programme recently reported an increase in short-sightedness which has been noticed since 1997; the start of high cell phone usage.

Perhaps it shouldn’t irk me so much, yet it does. Perhaps I should just stay cool and just not get sucked into the technology world. But it is increasingly difficult not to as so many things are now only done on-line.Do people ever talk to each other face to face? You can’t see nuances of expressions — oops, well maybe with Skype. I noticed a family of four eating in one of my favourite pizza places. A father, mother, son and daughter — all they did while waiting for their food was text.

The reason I decided to write on this subject was not to complain, but rather to think into the future. I have always been fascinated by the theory of how our species evolved. The so-called ‘survival of the fittest’ relied on adapting to one’s environment —- birds with longer beaks got to reach more nectar, for instance. There are many examples. Mind you there is also a theory, that instead of slow mutations there are quantum leaps. No matter which theory, we will probably look much different in the future.

I wondered just what the human race, assuming it survives, will look like in 100 years or so.

Would our changes be slow or quantum leaps? Considering how speeded up the whole world seems to be, I would bet on the latter.

Technology appears to be here permanently. Nothing short of a Magnetic Pole Reversal will throw it off, so the people who would do best, even thrive, will have the physical attributes that make using all the technology easier and faster and more efficient.

I have an old cell phone and despite being a fairly small, slim individual, my fingers don’t always do their job properly when using it. Perhaps the human of the future will develop thinner, pointed fingers and thumbs — making it much easier to text and dial. Could the increase in short-sightedness be caused by constant staring ahead and focusing on small screens for such long periods of time? If that is true, wouldn’t one large eye in the middle of the forehead facilitate easier viewing?

It is a miracle that there are not more accidents. People are either busy texting or talking on their phone or listening to music with a plug in their ears. Larger, concave ears would pick up signals better and it would be simpler to be born with AM/FM receivers built into the ear, controlled by your phone or computer. It is less to carry around, for sure.

Our skeletal system is taking a beating.The head is bent to use the phone and a curved back because we sit so much.We suffer from aches and pains now, but if it were the natural form, it would eliminate back problems in the future.

Because we sit so much at computers, tablets, etc., in the future we could develop much larger backsides — better balance and very comfy. Think of the silhouette of a Bosc pear with a bent stem.

Even if you are not a highly visual person, I am sure you can imagine the peculiar looking homo-sapiens of the future. It occurs to me that when you see the many stages of humans developing from the ape to the human today, the future human might just slightly resemble a few stages prior to us today. Yikes! — are we progressing or regressing? Stay tuned. ■ 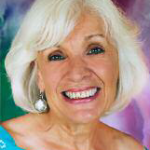