This column is written by a guest writer and good friend. Margaret Thompson, a retired teacher, writes about her experience with losing a parent in longterm care during the COVID-19 pandemic. Her  honest, heart-rending story is a personal one, but it also speaks to the bigger picture of our societal and systemic failure to protect our oldest and most vulnerable citizens living in retirement and longterm care homes. Margaret’s feelings of despair, grief and guilt over the circumstances surrounding her mother’s death and the difficult mourning process
that follows are shared by many others who have lost loved ones. Take a deep breath and read on. 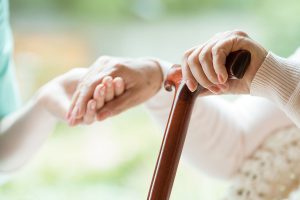 My mother, Helen, died at age 103 on November 16, 2020. In the aftermath of her death, I would flinch inwardly at the well-intentioned phrase, “Well, at least she lived a long life.” Foremost for me, however, was that she needn’t have died how and where she did— of COVID-19 in a retirement home ill-equipped to handle such an outbreak.

For months before her death, I had to time my visits carefully to avoid finding Mom napping. She had grown weary. “I’ve lived long enough,” she’d say, or “I wouldn’t be upset if I knew I wasn’t going to wake up tomorrow.” All such pronouncements were made in a matter-of-fact way. She had reassured me a number of times that she did not fear death because it would allow her to be in the presence of God.

It is one thing to be weary of life but another to be cheated of it. Few of us die in a manner of our own choosing. For Mom to die of COVID because of the negligence of others, felt like she was stolen from me like a phantom thief I couldn’t possibly chase.

The home where Mom lived had been spared during the first round of vaccine testing. I was still able to visit her, but only by appointment in the small chapel. Both of us had to be masked and sit six feet apart. Because of her partial deafness, Mom relied on lip reading, which made understanding me challenging. I left those visits overcome by a feeling of loneliness and hollowness. I longed to be in her room, to hug her, comb her hair, rub her hands with hand lotion, and share her favourite Lindt milk chocolate before tucking her in under her blue comforter. I was left wondering if she missed those moments of physical connection as much as I did.

Not long after the first round of testing, the virus crept into the home. Like a single spark ignited in a forest, the virus soon grew into a wildfire until 40 out of 100 residents and 18 staff tested positive. My mother was one of the unfortunate forty. I was helpless to do anything, a daughter marooned on an island, unable to reach shore. Daily phone calls to check on her progress were my sole connection.

I was falsely encouraged by news that she seemed to be successfully fighting the virus. But my optimism was shattered a week later when I learned that she was failing. Two days before she died, she was connected to me by phone and the last words I ever heard from her were, “That’s my daughter’s voice.”

I was given the opportunity to visit her in person at a point when she was slipping in and out of consciousness. Doing so would have entailed me wearing a gown, mask, and shield and remaining six feet apart. Would she have known who I was? Would she have recognised my voice, my face? Could I risk contracting the virus myself, and worse yet, passing it on to my 81-year-old husband? I was faced with a  moral dilemma no child should have to: be with a dying parent or risk infection from a deadly virus. The pain of that decision enveloped me like a dark shroud. In the end, I chose to protect the living over being in the room with my dying mother. The only feeling worse than that pain was the guilt of having made that choice.

The final phone call came two days later. I was told that there was a caregiver with Mom, holding her hand as she died. How I longed to have been that person.

Mom’s ashes rest in an urn at my brother’s home. COVID will dictate when we can hold a service and scatter her ashes in the memory garden at St. George’s Anglican Church in Clarksburg. In the meantime, I float in a void punctuated by grief, trying to imagine a time when Mom will be reunited with Dad, whose ashes rest amongst the church garden’s rose bushes. We will honour Mom well and I will pray, yet again, for
her forgiveness.

Thank you, Margaret, for this thoughtful, poignant reflection. Readers, how do you feel after reading Margaret’s story? Have you lost a loved one in longterm care? Write to me at wanderingpeggy@me.com. I’ll be sure to share your comments with Margaret.