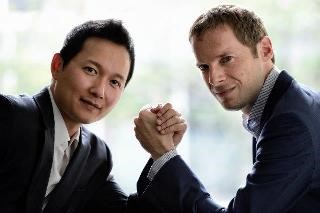 Young people age 5-11 will enjoy their own version of the recital by David and Wonny in an hour-long, interactive performance at Music & Truffles, Sunday, January 14, 1:15 p.m. at Walter Hall. Host Joanna explores the music and chats with the artists, facilitating some audience involvement.  Adults wishing to learn more about music and music-making are also welcome.  Everyone receives a Lindt chocolate truffle at the end.  Tickets, $20, and information are available from www.mooredaleconcerts.com, or by phone at 416-922-3714, ext. 103.

A virtuoso with a warm and elegant style and wide-ranging repertoire, David Jalbert (http://davidjalbert.com) performs regularly as a soloist and recitalist across North America and Europe, and has won critical praise worldwide for his recordings. A national and international prizewinner, he has been nominated for three JUNO Awards.  He is also professor of piano at the University of Ottawa. “Jalbert dazzles with skill, style and taste… with all the finesse and exuberance a listener could want” – Toronto Star

Widely praised for his poetic touch and depth of musical insight, Montreal-based, multi prizewinner Wonny Song (www.mooredaleconcerts.com/about-us/wonny-song) has appeared with over 40 different orchestras. As winner of the 2005 Young Concert Artists International Auditions, he made recital debuts at Carnegie’s Zankel Hall and the Kennedy Center in Washington, D.C. “…A versatile, intelligent and deeply musical young pianist, and his recital…was one of the best programs of the season.” – The Washington Post

Did you know that you can see Ottawa by helicopter?