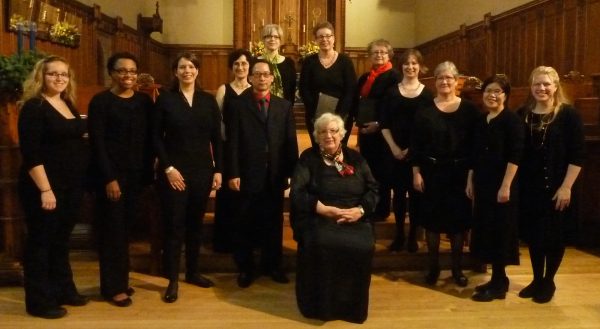 Healey Willan Singers was founded in 2005 as a tribute to the dean of Canadian composers, the late Dr. Healey Willan on his 125th anniversary of his birth. Initially a mixed chamber choir of young singers, in 2007 the Healey Willan Singers evolved into an all women’s ensemble open to singers of all ages. However, the choir maintains the goal of preparing young singers for a musical career, with opportunities for solo, accompanying and conducting available to the choristers. In addition, the choir also provides performance opportunities for children from local schools. In the past seven seasons, a number of elementary school choirs have been invited to perform with the Healey Willan Singers as part of our concert season. The combination of more experienced singers with the younger singers also provide a mentorship-like environment that is invaluable for
aspiring musicians.

The Healey Willan Singers presents a two-concert season, with challenging music selections in both the standard choral repertoire as well as some lesser known compositions. Also, the choir performs in a variety of styles, from medieval to contemporary music. In addition, music by Canadian composers (especially women’s composers) are featured regularly.

In April 2010, the choir gave the Canadian premiere of Eric Zeisl’s Drei Frauenchor a capella, with the help of the Zeisl’s family in providing the manuscript. And in April 2011, the choir joined forces with the Xiao Ping Women’s Chamber Ensemble in the Canadian premiere of British composer David Bednall’s Requiem for women’s voices, organ and viola solo. In December 2012, the choir performed the original 2-part version of British Columbia composer Sarah Quartel’s Snow Angel with great success. This season, the choir will perform Giovanni Battista Pergolesi’s stunning and hauntingly beautiful setting of Stabat Mater with the Paskke Quartet in April 2015.

The Healey Willan Singers rehearses and performs at the Church of St. Martin in-the-fields, located at 151 Glenlake Avenue, just north of Bloor Street West, and east of Keele Street (Keele Subway Station). Rehearsals are held on Saturday morning from 10:15 a.m. to 12:15 p.m. If you are interested in auditioning for this new and exciting venture as a singer, or would like to contribute or volunteer to the organization, please contact us.