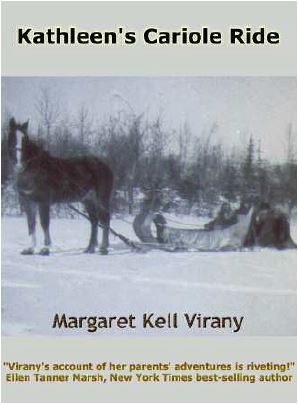 Margaret Kell Virany
Dunlop House Books
This love story of the author’s parents is not a typical one, especially, for the 1920s. A young seaman marries an English bride and carries her off to his preaching and teaching mission at a community of Swampy Cree located 500 miles northwest of Winnipeg, Canada. The idea for writing this book began after the author’s parents’ death when Margaret Kell Virany found a sheaf of letters locked in a keepsake box left by her mother, Kathleen Elizabeth (Ward) Kell. They were love letters written by Kathleen and Margaret’s father, John Ambrose Campbell Kell (Jack). The book follows their growing love as they exchanged letters that travelled across the Atlantic Ocean, across Canada to Manitoba, then by dogsled, canoe or foot made their way to and from remote Oxford House, Manitoba. Although this is a love story, it is even more than that. It captures what life was like in Canadian cities and in the northern regions of Canada during the early part of the 1920s, as compared with life in England during the same period. Margaret weaves the words of her parents’ letters into an interesting tale, making the reader feel that they are there experiencing Jack, while he devotes his life as a Methodist missionary in the wilds of northern Canada. Margaret’s natural storytelling ability turns the contents of this collection of letters into a fast-paced story that takes
the reader back in time, giving a glimpse of a particular time in history in England and in one of its colonies. Book review by June Coxon.

Did you know that you can see Ottawa by helicopter?