Wayne Ng has won the 2022 Crime Writers of Canada Award of Excellence for Best Crime Novella.

After close to 35 years as a social worker, Ottawa resident Wayne Ng is preparing to make his second career his full-time occupation. 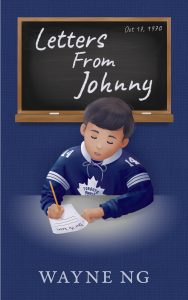 “Right now, I’m on the cusp,” says Wayne, who has already had two novels published with a third due out next year and ideas for a fourth formulated. “For the last few years, I have been juggling two jobs, writing in the evenings and at weekends pretty steadily. I’m really working at the craft.”

“I could retire from social work and be content with what has been a very fulfilling career,” adds Wayne, who will be 60 next birthday. “But I’m not ready to pack it in and put my feet up. There’s a lot I want to do and writing is number one. I’m devoting all my free time to writing. It’s invigorating and doesn’t feel like work at all. It feels like my second career. I know that Freedom 55 is a cliché, but it was when I hit 55 that my writing career took off.”

His first novel, Finding the Way: A Novel of Lao Tzu (Earnshaw Books, 2018), is a historical novel set in sixth century B.C. about the life and times of Chinese philosopher Lao Tzu, the founder of Taoism.

His next book, a novella told in the voice of an 11-year-old boy, was published three years later. Letters from Johnny (Guernica Editions, 2021), won the 2022 Crime Writers of Canada award of excellence for best crime novella. It’s comprised of missives from Johnny, first to a pen pal, as assigned by his teacher, and later to his hero, Toronto Maple Leafs captain Dave Keon. Set in the 1970s in inner city Toronto, the story covers major issues of the period, including the FLQ crisis, draft dodgers from the U.S. avoiding the war in Vietnam and a murder, seen through Johnny’s young eyes.

“Although I’m not a parent, I’m very comfortable with writing in a child’s voice and from a child’s perspective,” says Wayne. “As a school social worker, I spend all day talking to kids and trying to get into their heads. I’m trying to see and understand how they see the world and help them make sense of what’s happening around them.”

In pursuit of authenticity in Letters from Johnny, Wayne includes the spelling and grammatical errors that a child of a particular age and background might make.

“I tried to write the way kids talk,” he says. “If the writing was too correct, I think it would take away from the child’s perspective.”

But, he adds, though youngsters who have read Letters from Johnny “can identify with Johnny because he’s searching, wanting to belong and be part of something, the cultural references are completely over kids’ heads. I really wrote the book for adults who have lived through those times.”

Wayne’s young protagonist has a similar background to the author’s, growing up on the same street in Toronto and knowing a number of people with some similarities to his neighbours and teachers.

“I have strong memories of the draft dodgers, for instance,” he says. “And almost every character in the book is a derivative of someone I grew up with.”

Novel number three, to be published in 2023, is also non-traditional in approach. “I tend to write stories that are a little bit different,” says Wayne. “This one, The Family Code, also told from a child’s perspective, is a mother/son story—gritty and edgy and a bit profane. It will be out next May. I’m really excited about it.”

Also on the list of future works is a sequel to Letters from Johnny, to be followed by a novel with Johnny as a grandfather.

“There is a stereotype of Asian males being emotionally remote and distant breadwinners,” says Wayne. “While there may be some truth to that, I want to write about what it does to the kids.”

It is clear that Wayne Ng’s writing career is on track to be the focus for his future.

Thrills, Chills, Hoops and Highwires Cirque du Soleil is back with KOOZA