The Curious Trekker By Peter Johansen 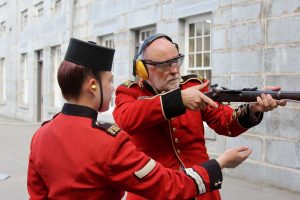 I’m in a safe corner of the parade ground at Kingston’s Fort Henry, fresh from watching the carefully choreographed display of 19th century military might that is the fort’s daily garrison parade. My ears still ring from the rapid rifle fire—140 precisely timed shots—that ricocheted off the limestone walls minutes before. The officer in charge, Ensign Michael McKitrick, had proclaimed the 30-minute event “decent,” then ordered his company to carry on with their day’s training.

Somehow, that training includes me. I’ve signed on to “Ready, Aim, Fire,” Fort Henry’s live weapons firing program. It’s a chance to handle the same historic gun that’s just nearly punctured my eardrums. That rifle, I learn, is an 1865 Snider-Enfield, the British army’s first breech-loading rifle. My instructor, Lance Corporal Erika Kelly, explains it was jerry-rigged from a muzzle-loading model, more than tripling the number of shots that could be fired each minute.

I figure I’m handling a modern-day replica—who would be dumb enough to entrust me with an antique? But Cpl. Kelly sets me right—this is the real thing

I’ve donned a red wool regimental jacket that’s ill-fitting (read: I pop a button) and heavy (in part because its lining is meant to be protective). By contrast, the rifle is surprisingly light. Under 10 pounds, it’s less than half the weight of the only other weapon I’ve ever fired, when I shot at (and missed) clay pigeons.

Wearing safety goggles and noise-cancelling earphones, I listen closely to my patient teacher, learning how to load the rifle: cock back the safety latch, open the breech, remove a cap from the firing pin, load a cartridge of black powder into the chamber, replace the safety cap, close the breech. That last step slightly terrifies me: there’s live ammunition in there.

With the rifle butt at my shoulder, I feel somewhat relieved. That’s because there’s no particular target; Cpl. Kelly won’t know how dreadfully I aim. I just need to shoot toward the courtyard wall of the fort, built between 1832 and 1837 to protect Kingston’s harbour and the Rideau Canal from Yankee attack.

The gun fires easily and has no recoil. “We use only a fraction of the gunpowder one would find on the battlefield,” Cpl. Kelly explains. “But it’s the same shot as you saw us use on the parade ground.” 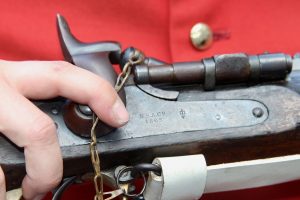 I remove the spent cartridge and reload, then do so a third time. By this point, I’m as giddy as a kid at Christmas, shocked that despite my pacifist leanings, I thoroughly enjoy the experience. Cpl. Kelly does too, she says, noting it’s a diversion from her usual job as a fife and bugle player. “I get to share history with people. How often do you get to help someone fire an iconic rifle—really the grandfather of all breech-loading rifles?”

As much as I enjoy the experience, however, my group tour of Fort Henry, led by Private Katrina Clissold, makes me thankful I wasn’t a 19th-century soldier here. We see the wee cells where soldiers were jailed, sometimes for something as minor as scuffed shoes or insufficiently shiny buttons. The men’s privy was an uncomfortable stone wall “so the men wouldn’t linger,” Pvt. Clissold says; their effluent was flushed into the bay where women laundered clothes.

Men had to petition for permission to marry. Only six per cent of the regiment were allowed a wife, so waits could be long. As many as nine families lived in dorm-like married quarters, their private spaces separated only by curtains. “There wasn’t much privacy,” Pvt. Clissold says in understatement. Soldiers were fed one meal a day. “Most of the recruits came from poor backgrounds,” she adds, so eating once a day was “something they would have been used to.” She says grunts had brown bread, the officers ate white; back then, the former wasn’t very good.

Rank had its privileges in other ways, as we learn at the officers’ quarters, increasingly elaborate as occupants moved up the hierarchy. Perhaps most interesting were the apartments for ensigns, lowest of the officer ranks. Ensigns, Cpl. Clissold tells us, were often transferred. As a result, their furniture—from bed and dresser to bathtub—had to weigh no more than 100 pounds, be collapsible, and fit into wooden boxes piled along the wall.

The officers had to pay for all the furnishings in their mess, from china to the table and sideboard it sat on, and they were encouraged to mix with townsfolk to build friendly relations with the community and help bolster their own morale. It all convinced me I’d rather practise “ready, aim, fire” as a modern tourist than as an 1867 grunt, even if I would have had a square meal every day. 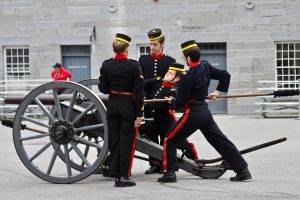 Want to go? Fort Henry, just west of the junction of Highways 2 and 15 in Kingston, is open daily through Thanksgiving.
Admission is $20 (adults), $16 (13-18 years), and $13 (5-12 years). Tax is extra.
The Ready, Aim, Fire program is available for anyone 12 or older from May 16 to Sept. 6,
can be requested upon arrival at the admission booth, and costs $20 plus tax.
This includes the firing of three blank rounds from a Snider-Enfield rifle, a free souvenir and 15 per cent off retail purchases.
For information, including other daily activities: forthenry.com.