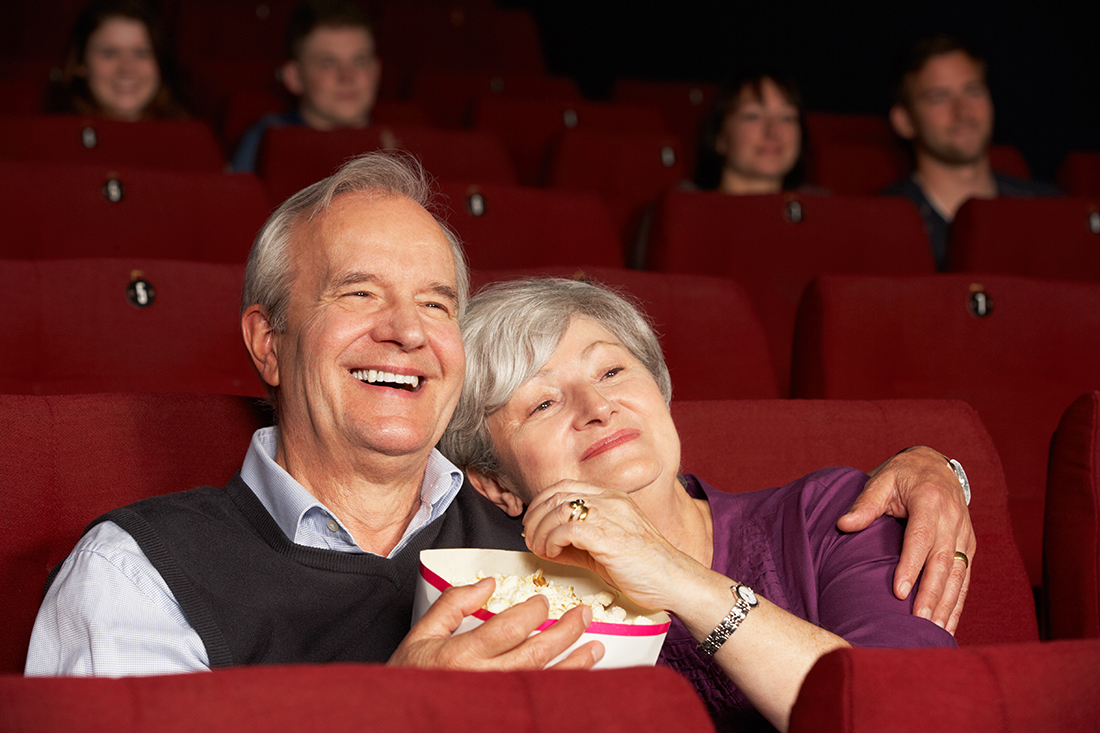 As we get ready for the glamorous Academy Awards, I wonder if there will be any winners that portray aging and older people in a positive, realistic way. Films that celebrate aging and treat the experiences of older people with respect have been coming out of the UK and Europe for some the population and of some big stars has nudged Hollywood to follow suit. Recently, I went with some friends to see Book Club. We howled with laughter and nodded in agreement as four women (Diane Keaton age 72, Candice Bergen age 71, Jane Fonda age 80 and Mary Steenburgen age 65) rev up their love lives after reading the sex-charged book 50 Shades of Grey. The film completely overturns the stereotypical belief that older women are not interested in sex or too frail to frolic under the sheets.

With movies like Book Club and The Best Exotic Marigold Hotel hitting the big screen, it’s easy to feel like the movies are becoming increasingly age-friendly. But most films and TV shows that focus on older people, even when well intentioned, tend to be condescending to their subjects. They are still filled with what researchers call “elder kitsch” — the stereotypical ways older people are depicted as alternatively cantankerous, cute, quirky, doting, stingy, forgetful, eccentric and/or endearing. While these treatments are there to get a laugh, they are often harmful and demeaning.

One of the worst, is the “grumpy old man” cliché. This character spends most of his time complaining about how the world is going wrong, how today’s youth show no respect and how everything was so much better when he was young. These crotchety old sourpusses, whose main role in life seems to be to embarrass others (As Good as it Gets), paint the older generation in a negative light.

My picks: 10 great movies about aging and older people

1. Amour (2012)
Georges and Anne, an octogenarian couple, are cultivated, retired music teachers. Anne has a stroke and the couple’s bond of love is severely tested. The film is a touching and realistic portrayal of love and commitment in later life. At the age of 85, actor Emmanuelle Riva became the oldest person to win a British Academy Film Award.

2. Quartet (2012)
At a home for retired musicians, the annual concert to celebrate Verdi’s birthday is disrupted by the arrival of Jean, an eternal diva and the former wife of one of the residents. Just as the recital is about to start, the director of the home is amazed at the energy displayed by the guests of the home. The idea of rehearsing and playing before an audience brings life back to them, leading her to the conclusion that old age and art go together.

3. Philomena (2013)
Judi Dench searches for her long-lost son in this heart-wrenching film based on a true story about an Irish woman searching for the toddler son she gave up for adoption as an unwed teen living in a convent. Despite the horrific way she lost her child, Philomena’s fortitude becomes clear in the face of awful truths, her immense capacity for empathy, her sharp insight into human behaviour, and her healthy frankness about sexuality. At 78, Dench’s lines and wrinkles underscore her ageless beauty and boundless ability to make us care deeply about her character and the lifetime of longing she has endured.

4. The Queen (2006)
Queen Elizabeth II, who herself is the perfect model for aging with dignity and service to others, struggles in the wake of Princess Diana’s death. In the end, she agrees to a state funeral for Diana. The 90-plusyear-old Queen Mum allows her own funeral plan to be borrowed and modified. She has a priceless reaction when she learns that Elton John and other celebrities will replace her honour guard of servicemen. This is a story about how older people can and do adapt in changing times, even when you are the Queen.

5. Harry and Tonto (1974)
Harry, a feisty 72-year-old, lives in Manhattan with his tabby cat Tonto. After he is evicted from his apartment, he embarks on a mission to find a new home. Harry’s journey of discovery eventually brings him to a world of sunshine and love far more liberating than the confines of his previous home. This is a liberation few other films ever provide to older characters, outside of death itself.

6. The Joy Luck Club (1993)
The Joy Luck Club is a group of four older Chinese women who meet once a week to play mah-jong and compare stories of their families and grandchildren. All have made harrowing journeys from pre-revolutionary China to the comfortable homes in San Francisco, where they meet. But those old days are not often spoken about, and sometimes the whole truth of them is not known. The film tells the stories of their lives and those of their daughters, moving between past and present, what was and how it became what is. The film beautifully explores how the hopes of one generation can become both the restraints and the inspirations of the next.

7. Iris (2001)
This film is a biographical portrait of writer Iris Murdoch at different stages of her life. When Iris begins experiencing forgetfulness and dementia in later life, her devoted husband John struggles with hopelessness and frustration as his wife’s mind deteriorates from dementia. Some critics say that the film does not give enough acknowledgement to the brilliance of Murdoch’s work. But it is a realistic depiction of the ravages of Alzheimer’s disease, something we need to understand as our longevity grows.

8. The Best Exotic Marigold Hotel (2011)
It is a common belief that all older people want to “age in place.” This film turns that idea on its head, showcasing a group of older people who dare to step outside their comfort zone and move to India to live in the exotic but fading Marigold Hotel. The script constantly reminds us that no matter how old we are, we are still learning all the time.

9. Elsa and Fred (2014)
This sweet story follows its leads (Shirley MacLaine and Christopher Plummer) into a shaky octogenarian affair as the quietly dying Elsa slowly convinces her new neighbour Fred to overcome his denial. In turn, he evolves into the mythical gentleman she has longed to love. We should all be so fortunate to find such romance and rejuvenation in old age.

10. Cocoon (1985)
This film is the rare science fiction story that features older characters. Four couples living out their fading days at an assisted care facility meet up with space aliens who give them the opportunity to leave earth and go to their planet, where they will live painlessly forever. This is an entertaining film about facing the fact that we all eventually die — an idea that is almost always avoided in American cinema.

Peggy Edwards is a well-known writer and speaker on aging and health and is a co-author of The Healthy Boomer: A No Nonsense Midlife Health Guide for Women and Men, available at amazon.ca. What films do you think best portray growing older and old age? Write to me at wanderingpeggy@.me.com and we’ll develop a more complete list to share with 55-Plus readers and friends. Happy film watching!