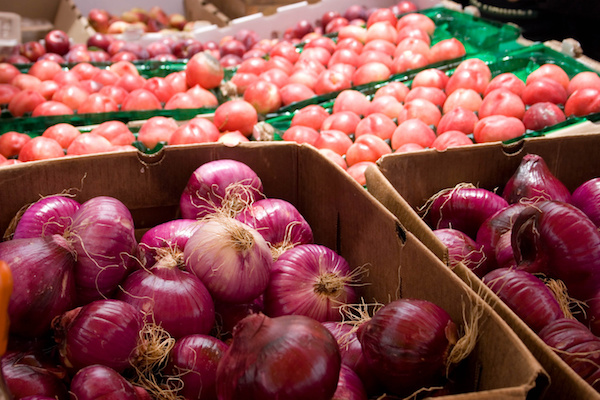 Who can resist the look and smell of fresh produce? Not to mention the excitement that comes with meeting those dedicated individuals who grow such beautiful crops. For our everyday needs, most of us rely on food several days or weeks old that has been shipped in to grocery stores.What a pleasure to encounter the country and its fresh agrarian resources. In addition to the produce sold at farmers’ markets,there is generally a selection of preserves, baked goods, handcrafts, and sometimes clothing. Often, the marketers will offer prepared foods on which to munch while you browse.The following list of markets is not all-encompassing, but is meant to provide a sampling of the places to visit in various areas. Many more markets can be found at FarmersMarketsOntario.com.

Alexandria: In Alexandria Island Park on the edge of Mill Pond, the market season begins the third week of May until mid-October, from 8:30 a.m. to 1:30 p.m. Its 13 vendors have an incredible selection of wares, from fresh produce, meat and quail eggs, to natural and bio products. Contact Joyce Lanthier at 613 874-2174.

Maxville: Ten vendors sell fresh produce, meats, soaps, maple products, preserves and more at the site of the old King George Hotel on Main Street each Friday from 3 to 7 p.m.The market runs the third week of May to mid-October. For information, contact Audrey Evans at 613 527- 3386.

Cornwall (Seaway Valley Growers’ Market): Home-grown fruits and vegetables are sold in season by 12 vendors from the first week of June to mid-October on Saturdays from 7 a.m. to 12 p.m. at The Brick parking lot, 1425 Pitt Street. The market opens Wednesdays from mid-July. Call Marc Brunet at 613 347-3121 for more information.

Vankleek Hill: Operating year-round from the first Saturday of January to the last Saturday before Christmas at the Vankleek Hill Collegiate Institute (Victoria Day to Thanksgiving outside, winter inside), 24 vendors market their produce from 9 a.m. to 1 p.m. Offerings include locally-grown organic produce, naturally-raised meats (deer, wild boar, etc.), honey, preserves, prepared foods, artisan crafts and much more! The market hosts the Festival of Flavours in September and a high school gingerbread contest in December. Visit vankleekhillfarmersmarket.ca for more information.

Brockville: Operating for about 180 years, the Brockville Market is one of the oldest. Its more than 50 vendors sell everything from fresh produce to clothing from the beginning of May to just before Christmas. Located on Market Street West behind City Hall, the market is open Tuesday, Thursday and Saturday from 8a.m. to 1 p.m. and attracts a combination of tourists and locals who look for- ward to the fresh produce. Visit brockvillefarmersmarket.ca for more information.

Frontenac-Verona: From the beginning of May to the end of October, the 21 vendors of the Fron- tenac Market in Verona offer fresh produce and artisan crafts. Located at the Prince Charles Public School, they are open Saturdays from 9 a.m.to 2 p.m.Annually,they offer a special Christmas market featuring breakfast with Santa. Go to frontenacfarmersmarket.ca for more information.

Memorial Centre Kingston: One hundred per cent producer run, with locally-grown produce within 161 kilometres (100 miles), the 30 vendors offer an eclectic variety of items Sundays from 10 a.m. to 2 p.m. from mid-May to just before Christmas, with special events throughout the year. They are located at 303 York Street, outside for most of the year and in the barn during November and December. From mid-January to the beginning of May, the market is located in the Princess Street United Church Hall. Visit memorialcentrefarmersmarket.ca for more information. Stirling: Near the Grand Trunk Railway Station and the Heritage Trail, nine vendors sell their wares from 8 a.m. to 1 p.m. Saturdays. From fresh produce and quilts to natural soaps and lotions, the buyer can find a little bit of everything. The market holds a roast beef dinner in November and sells tickets to the Stirling Theatre. For additional information, contact Jocelyn Reilly at 613 395-5380.

Campbellford: From the beginning of May to the end of October, 11 vendors, who have been carefully screened to make sure the produce is local, exhibit their offerings at the corner of Market and River Streets, Wednesdays and Saturdays from 8 a.m. to noon. Contact Frank Vaughan at 613 475-9435 for more information.

Fenelon Falls: Wednesdays from mid-May to mid-October, 11 a.m. to 4 p.m., the market operates at “on the island on the locks” at the Trent-Severn Waterway, and Friday from 2 to 7 p.m. in the Canadian Tire parking lot at 160 Lindsay Street. Fifteen vendors offer an eclectic mix of fresh produce, artisan goods, and ready-to-eat food. Come for lunch! Call Pauline O’Brien at 705 887-3974 to learn more.

Lindsay: From the first Saturday of May to the last Saturday of October, Victoria Street from Kent Street to Peel Street is occupied by over 35 vendors who sell seasonal produce, jewellery, furniture and much more. Established in 1859, it is one of the longest-running markets. A Christmas market is held in December at the Armoury on Sussex Street North. The market is open from 7 a.m. to 1 p.m. until the end of October. The December market is open from 9 a.m. to 3 p.m. Visit lindsayfarmersmarket.ca for more information.

Peterborough: Wednesdays from 8:30 a.m. to 2 p.m. at the Louis Street parking lot on the south side of Charlotte Street, from the first week of May to the end of October, 29 vendors market their wares, including fresh produce, ar- tisan goods, seasonal products and much more. Contact Hayla Evans at 705 657-8592 for more details. North

Barry’s Bay: The Old Train Station hosts the market every Friday from Victoria Day to mid-October, 11 a.m. to 4 p.m. The 18 vendors offer meat, baked goods, fruit, vegetables and crafts. Special events are held on Bay Day in May and Taste of the Valley in August. For more information, contact John DeGrout at 613 401-2749.

Deep River: Promoting the produce from Renfrew County and around the town of Deep River, the market takes place at the Town Hall. From the end of May to the beginning of October, 15 ven- dors sell their wares every other Saturday from 10 a.m. to 1 p.m. The last market celebrates Taste of the Valley. Call Andrew Bergeron, market manager, at 613 584-1255 for details.

Eganville: The Legion Memorial Field is home to the market Fri- days from 2 to 6 p.m. from mid-June to early October. Homegrown and handmade products fill the stands of 13 vendors. Call Judy or Cam Sauve at 613 628-9898 for more in- formation.

Madawaska River–Burnstown: Following the 100-kilometre (62-mile) rule, 11 vendors market homegrown produce and crafts in Burnstown, just off Highway 508. Open Fridays from 2 to 7 p.m., the market season is from the end of June to mid-October. For more details visit madrfm.com.

Carp: This is the largest producer-based market in Ontario. Located at the Carp Agricultural Grounds in the Village of Carp from 8 a.m. to 1 p.m., 109 vendors sell an incredible selection of produce, baked goods, crafts, and more during the regular season from the first weekend of May to the end of October. It hosts the Garlic Festival with over 80 varieties of garlic and garlic products in early August, and a Christmas Market at the beginning of December. Visit carpfarmersmarket.ca for more information.

Cumberland: The Cumberland Arena/R. J. Kennedy Community Centre is the location from which 80 vendors exhibit their fresh produce, specialty foods, homemade treats and artisan goods. The market is open from the middle of June to the middle of October from 8 a.m. to 1 p.m. Saturdays. A Christmas market is held the first Saturday of December. Visit cumberlandfarmersmarket.ca for specifics.

Manotick: In front of the Carriage Shed near the old Watson’s Mill,the market adds to the charm of the area.Ten vendors offer local pro- duce from within the Ottawa City limits from 9 a.m.to 2 p.m.,mid-May to mid-October. Get further details from manotickfarmersmarket.com.

Ottawa: Ottawa’s markets have been in operation for many years and offer a great variety of local produce, seasonal goods and handmade crafts. Vendors come from many areas in eastern Ontario and western Quebec to participate. Although there are a number of other markets in the region, the following three markets are unique:

ByWard Market: Along with the 500 businesses in the market area, 260 market stands showcase fresh produce, flowers and bedding plants, arts and crafts, clothing and retail goods from late April to the beginning of November, seven days a week from 6 a.m. to 6 p.m. One of the prime tourist attrac- tions in the Capital, the market av- erages 50,000 visitors each weekend.Visit byward-market.com for more details.

Organic Market: Located in the Canada Care Medical Centre in the alley behind the Canadian Tire at Bank and Heron Roads, the market runs all year (inside during the winter and outside during the summer). Market wares are strictly Certified Organic meats, breads, vegetables, fruits, olive oil, teas, herbs, as well as skincare products.The 14 vendors open their stalls from 10 a.m. to 2 p.m. Saturdays. Call Karen Cook at 613 924-1423 for further information.

Parkdale Market: On the west side of Parkdale Avenue from Wellington to Armstrong, 18 vendors market their produce seven days a week from 6 a.m. to 6 p.m., from the end of April to the beginning of November. Bedding plants and cut flowers are sold,as well as fresh produce. In addition, shop- pers can order fresh goods, such as frozen meats and cheeses, online at savourottawaonline.ca and it will be pre-packaged and ready for pick up at the Parkdale Field House. Call Normand Geoffrey at 613 244- 4410 for more information.

With so many options in our own backyard, get out and celebrate the bounty from Ontario gardens! n 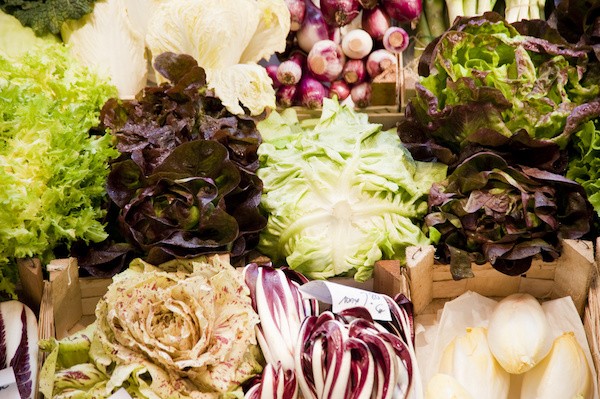 In Toronto, the Toronto Farmers’ Market Network brings together community-based farmers’ market organizers in the city.  There are over three dozen markets in the network, including a half dozen locations that are open through the year.
The iconic St. Lawrence Market includes three main buildings: The South Market, the North Market and St. Lawrence Hall. At the North Market building, producers from Southern Ontario bring their seasonal produce for its Saturday Farmers’ Market; it’s a tradition that has been established since 1803.