Hawks are beautiful birds of prey

The expression ‘watching someone like a hawk’ suggests paying close attention, checking in particular for any mal intent. While in nature such intent may not apply, there can be no doubt that if a hawk has its eyes on a subject, it had better be prepared to move, fast! 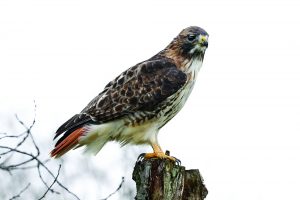 Hawks are birds of prey, feeding on a variety of creatures from mammals and reptiles to fish and birds. You might be surprised to learn that some smaller species even hunt for insects like dragonflies and grasshoppers. Watching a hawk clutching a long snake is definitely a sight to behold.

When we think of a hawk, one of the first characteristics that come to mind is the beak. While impressive, this feature is used for tearing into its
victim once it has been captured. The real power is in the feet. As the bird stealthily approaches its prey at great speed, the talons grab it with an iron grip.

Of all the species that you have seen, the most common one is likely the Red-tailed Hawk. This is a large variety, often found in open country, particularly in edge environments. It is even at home in parts of our cities and is the hawk most frequently spotted along 400 series highways, hunting the shoulders and interchanges for small mammals like voles. I jokingly refer to this as the ‘401 hawk’.

The tails of adults are cinnamon red above and pale below. The upper feathers are mostly brown but underneath the bird is largely pale with some brown markings, notably on the breast. Young birds have heavier streaks on the breast and lack the characteristic red tail. The dark above, light below colour pattern is for camouflage. Because this species hunts by soaring for extended periods, it makes it more difficult for prey to spot it high above. 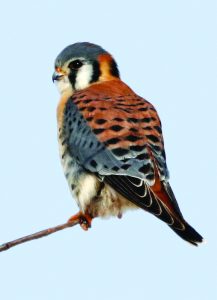 Young skunks, muskrats, groundhogs, rabbits and voles are high on the list of dinner favourites, but it is not built to chase most birds (grouse are an exception).That is a job for short winged, long-tailed species — the bird hawks. The two most frequently seen are Sharp-shinned and Cooper’s Hawks, which feed almost exclusively on birds. If a hawk is hanging around your neighbourhood picking off finches, sparrows and doves, it is likely one of these birds.

Then there is the Osprey, a species feeding almost exclusively on live fish. This is a large bird, dark brown above and light below with long wings. When it spots a fish, it will hover, then plunge into the water, coming out dripping wet, hopefully clutching a meal in its specialized feet. It has two front-facing toes and two in the back, with rounded claws that can readily pierce its catch. There are barbed spicules on the underside of the toes to secure the grip. Ospreys are a regular
feature of many Ontario lakes and rivers, with high nest platforms erected in some areas to increase breeding success.

Perhaps the most admired members of the hawk family are the falcons. They are characterized by long pointed wings, slender bodies and head markings that suggest a helmeted look. Larger species were prized by royalty for the sport of falconry.

The American Kestrel is our smallest species, about the size of a Mourning Dove and is usually found in open rural settings, often perching on power lines. It will eat insects when abundant but will also take voles and small birds. Next up is the Merlin, a bit larger and can be located in natural or urban settings. Tall spruces, a feature that is common in residential areas are ideal nest sites. This bird has occasionally gotten a bad rap for dive bombing pedestrians when they enter its nesting territory.

Topping the list of falcons that breed in our region is the Peregrine, a large dark bird with streaked under parts and presenting a strong ‘helmeted’ look. This species is reputed to be the world’s fastest flyer, reaching breakneck speeds in a stoop. Woe to any unsuspecting pigeon, duck or shorebird when it is in its jet fighter dive. Peregrines are no longer considered endangered but they are still uncommon. Surprisingly, they are often seen around inner cities where tall buildings and other structures offer cliff-like nest sites and where pigeons, gulls and Starlings are abundant.

Most of our hawks leave the province in the fall but some remain to hunt during the winter. From September through November, hawk movement is in full swing. Days with brisk northerly winds are ideal for migration and some sites along the north shore of Lake Ontario and Lake Erie offer excellent viewing opportunities under those conditions. Banner days with thousands circling overhead as they follow the shoreline, reluctant to cross the open water of the Great Lakes offer a sight to behold. 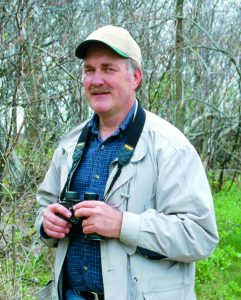