Tales in leaving the nest 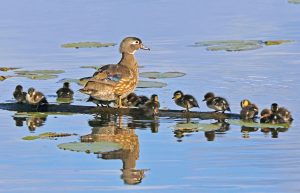 Have you ever watched a Robin build a nest and go through the breeding cycle? Mother looks around for a suitable location, perhaps in an evergreen, underneath the eaves of a roof or even on a light above your front door, anything that provides support for a nest of grasses and mud. Once a site has been chosen, she builds the nest, lays three to five blue eggs, and a 13-16 day waiting
period begins while she completes her task of incubating.

The chicks hatch naked, relying on their parents for food and protection, but then something amazing happens. In about two weeks, the youngsters hop out of the now very crowded nest, sporting a new look and already being almost half the size of their parents. It will take a bit longer for their plumage to fully develop and reach adult size, but they will fly very soon. It is amazing how fast the whole process unfolds.

For the next few weeks, the adults will continue feeding the chicks, which quickly learn how mom and dad search for insects and, of course, worms. You’d think that is when the parents would finally have a break from the routine, but often they start the cycle over again shortly after, occasionally having two nests on the go at the same time. Now that’s dedication. A few even have a third brood by late summer. It’s no wonder we have so many Robins!

It is not that way for other birds, however. ‘One and done’ is good enough for most sparrows, finches, warblers, hawks and the majority of other species, but there is a considerable variation in what goes on during the breeding cycle. 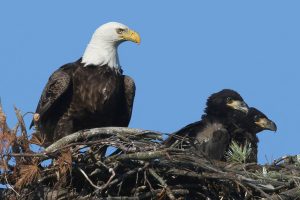 Take the Bald Eagle, for instance. Its nesting period extends from April into mid-summer, with one to three chicks remaining in the massive stick nest until they can fly. When the chicks reach adult size and are ready to fledge, usually in June, the parents accelerate the departure by reducing the number of meals they bring, a not-so-subtle persuasion to hit the road. They may return to the nest on a regular basis for a while, without the parents, but they will eventually move on.

Some chicks look very much like their parents once they can fly, while others have juvenile plumage that lasts into the fall. This is typical of smaller birds like warblers. Bald Eagles have an immature plumage for years, gradually progressing to full adult in their fifth year. They are, however, fully grown in a few months. A Bald Eagle in its first year can be very confusing because it might appear to be a Golden Eagle, but to experienced observers, there are subtle plumage differences. The Bald also has a larger beak. If you think you have a Golden here in the summer, you almost certainly have a young Bald Eagle. Golden Eagles are in the high Arctic at this time of year, returning in late October-early November.

We are in prime time for breeding, with most birds either on the nest or busy rearing young. It seems to be a daunting task for smaller species like Bluebirds that bring an endless supply of insects to their hungry brood. This goes on virtually nonstop, from sunup to sundown, with both parents sharing the load, pausing periodically to swallow the occasional catch.

That is the expected routine, but it isn’t the case with hummingbirds. Mom does all of the work, from nesting to raising her one to three chicks. Dad is off doing his own thing through the entire cycle. Perhaps his job is to look good.

Some of the more dutiful parents are waterfowl. Ducks and geese watch over their progeny, which, being feathered at hatching, can get around on their own almost immediately but need guidance. These little fluffballs are pretty cute in the first week, and there are usually lots of them in a clutch, which is nature’s way of ensuring that some survive. Because they can’t fly for weeks, they are ‘sitting ducks’ for predators like foxes, hawks, snapping turtles and even pike. We’ve all seen videos of Mother Goose with her flock crossing the street, holding up traffic. If you are on foot, don’t make the mistake of getting too close because she won’t hesitate to tell you to back off.

I hope you enjoy the summer and have a chance to relax and watch nature at its best. Whether at a cottage, in your yard or even on an apartment balcony, you can observe birds as they continue the cycle of life. We all need to connect with the natural world because it is where we come from—an important reminder as we deal with uncertain times.