Story and photos by Brian Morin

It’s hard to believe but signs of fall abound in the bird world. Already many swallows have departed for their winter homes. Shorebirds have finished nesting in the Arctic and songbirds are lining up for northerly winds to take them on their overnight journey south, guided by the stars and the Earth’s magnetic field as they go. 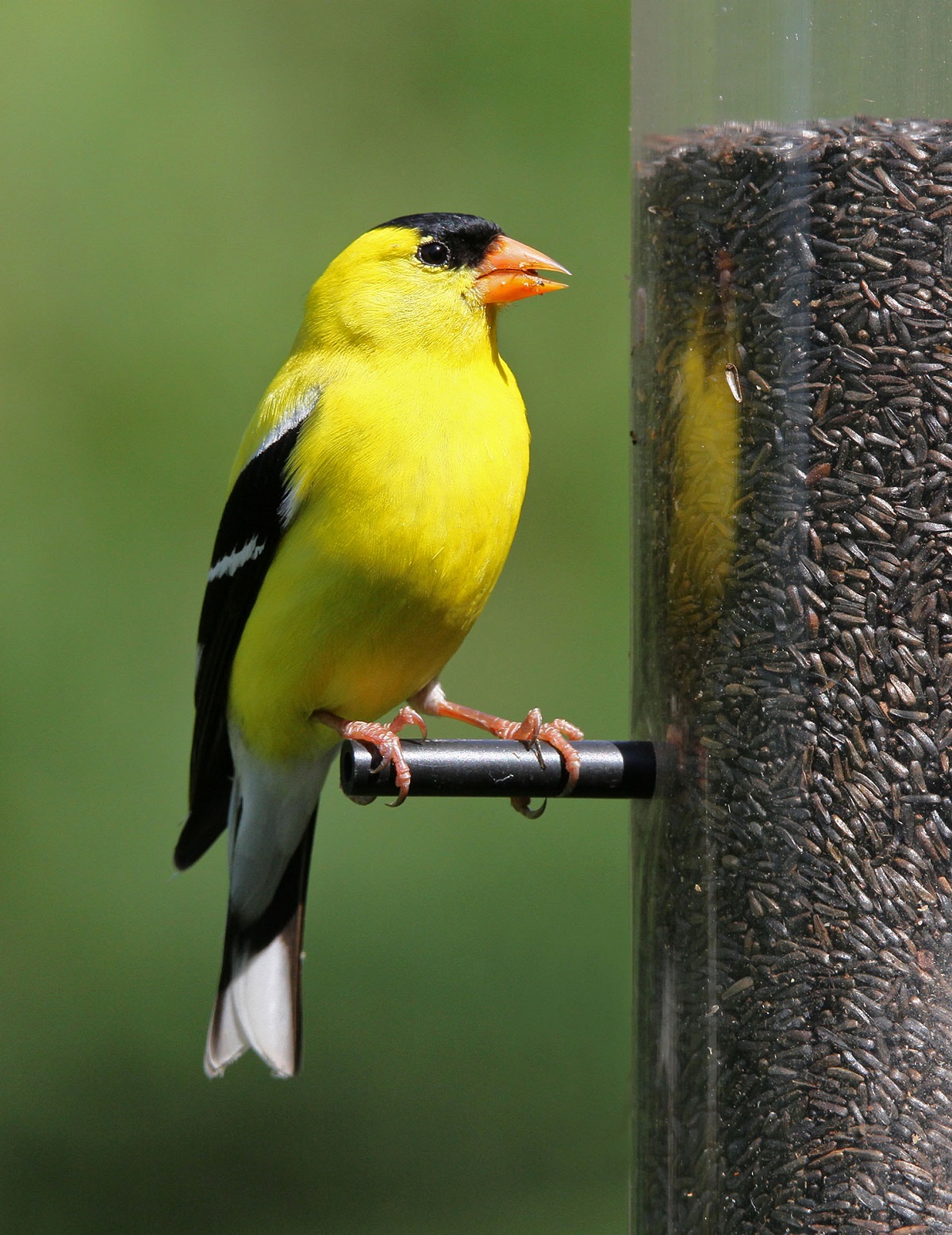 For American Goldfinches, however, nesting season is in full swing and some may still be incubating their small clutch of pale bluish white eggs. That may seem rather odd when you consider that many of these birds return from the south in April before other songbirds, most of which set about their parental duties within days or weeks of arrival. Are Goldfinches chronic procrastinators?

Actually no, they are vegetarians.

Actually no, they are vegetarians. Goldfinches—sometimes called wild canaries because of their musical, canary-like song—almost exclusively eat seeds rather than the insects that form the bulk of meals for other species during breeding season. And seeds are what they feed their young. Their preferred food is seeds from weeds such as thistles, dandelions, grasses and composite flowers like those in the aster family. They also enjoy tree flowers from birch and aspen. Seeds from many of these plants only mature from mid to late summer which would make it impossible for their chicks to survive if there was an earlier nesting period.

A positive aspect of feeding regurgitated seeds to their chicks is that should a parasitic Cowbird lay an egg in their nest, the much larger and more aggressive Cowbird chick would perish within days, unable to survive with such a strict, low-protein diet. Otherwise, most of the Goldfinch chicks would likely perish from starvation, unable to compete for food.

Another benefit of late breeding comes with nest construction. The female Goldfinch uses the down from thistles, milkweed and other plants to line her small, almost water-tight cup of plant fibres lashed with spider silk to the fork of branches in a sapling. Plant down is only available later in the summer. The female weaves her creation on her own in about six days although the male may bring her some of the nest material to work with. Despite the fact that such masterful works are very durable, they would not be reused in subsequent years. This ensures there are no unwanted mites, ticks or dirt present for the new clutch. 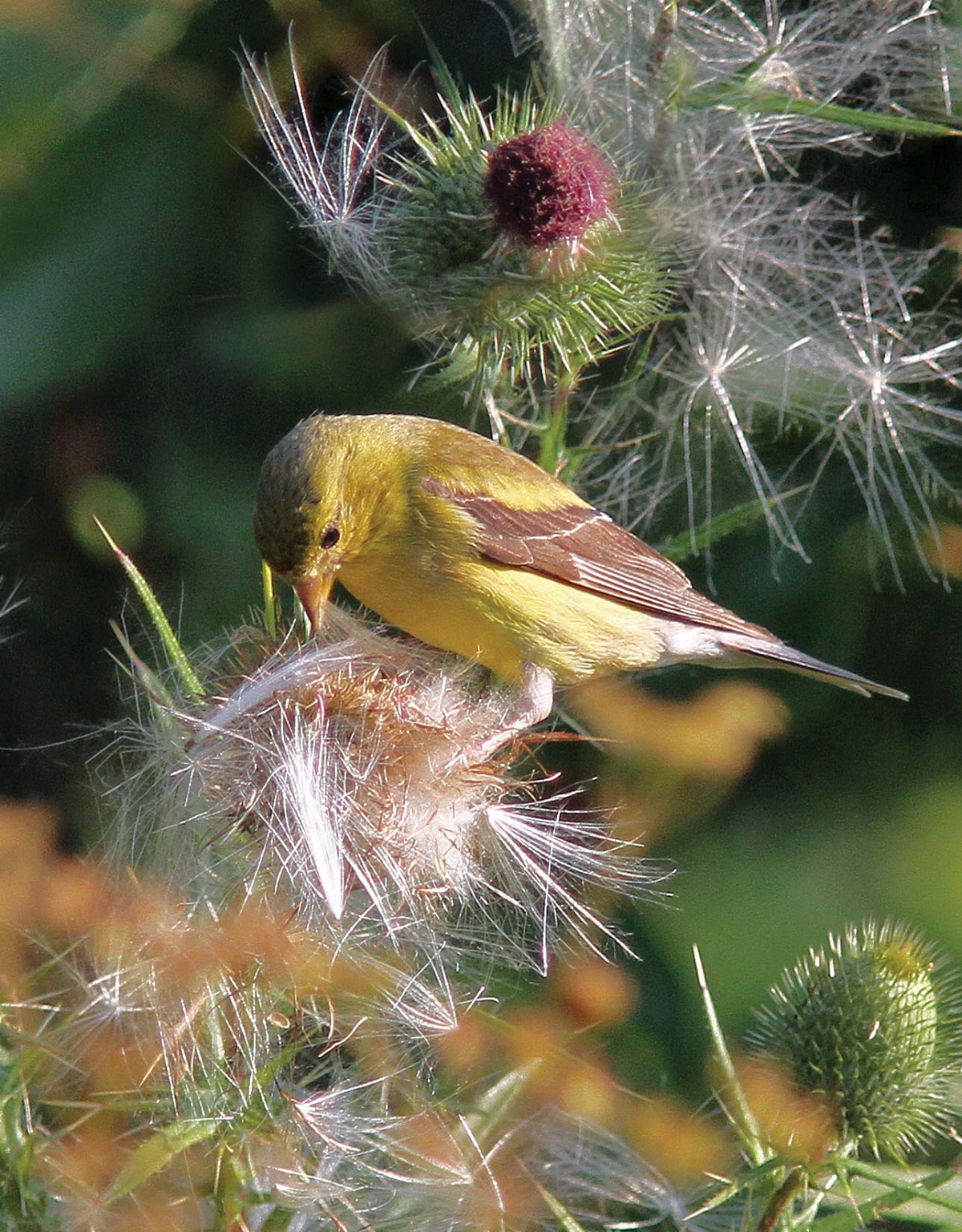 Once the young have fledged, which takes less than three weeks, they will make their way in the world like all other species but you may be pleasantly surprised if they show up at your feeders. Goldfinches like the seeds that backyard birders offer, specifically the fine Nyjer seeds and the more robust black oil sunflower seeds. Don’t worry, feeders do not replace natural food for either adults or young, they supplement it. The birds benefit from high quality seed while we enjoy their presence.

Who doesn’t appreciate the boldly-coloured male Goldfinch, one of our favourite songbirds?

The male’s lemon yellow, black and white feathers are present from mid to late April through the end of the breeding season. In the spring there is a partial molt in which body feathers are replaced, revealing the bright plumage we are familiar with, but wing and tail feathers remain from the previous fall. That’s when it molts its entire plumage over a period of six to eight weeks, closely resembling the more subdued female when it is complete. This means in the off season you could be looking at a Goldfinch and not know it. Some years large numbers will remain behind rather than migrating, keeping our feeders hopping during the cold weather.

This is a gregarious, amicable species. Goldfinches enjoy each other’s company, whether in our yards or feeding in open weedy fields and along country roadsides. As an affectionate partner, the male behaves tenderly with his mate when she is brooding the eggs, bringing her seeds in his esophagus and feeding her gently as if she were a nestling. By contrast, in years when Pine Siskins head south for the winter they may mix with Goldfinches and the behaviour difference is dramatic. At feeders, Goldfinches get along fairly well, unlike their northern finch cousins who are little scrappers.

If you have ever watched Goldfinches fly you will have noticed their bouncy flight pattern and have heard their identifiable ‘po-ta-to-chip’ calls uttered in the air. Males sing a series of long warbles and twitters, randomly presented, rather than the more regularly sung melodies of other species. This is where they derive the comparison with real canaries. Whether you call them Goldfinches or wild canaries, these birds rank high on the list of backyard favourites.

Female gathering thistle down for her nest