In the Garden
By Julianne Labreche

Bringing back the flora and fauna 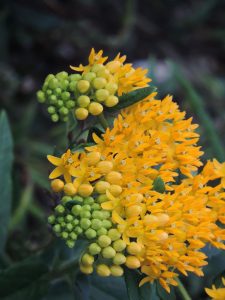 My home lost its native land long ago. Once all forest, then later farmland, bulldozers moved in during the sixties to create an Ottawa suburb. Now, many years later, my passion for native plants means that I’m slowly learning how to reintroduce some eastern Ontario plants back into my urban landscape.

It’s not always easy. So much has changed over time. The original soil is long gone, replaced by a thin layer of topsoil overfill. Typical of many suburban spaces, non-native turf grass was planted in the front yard—a non-native that requires heavy fertilizer, copious watering and a power mower. As the years progressed, someone planted perennials in the backyard, including several nasty invasive types— goutweed (Aegopodium podagraria), lamium (Lamium maculatum), periwinkle (Vinca major) and creeping bellflower (Campanula rapunculoides).

These days, under my gardening thumb, the front yard has been turned into a pollinator garden. The grass is gone and those backyard invasives have been removed.

I’m inspired, in part, to learn more about natives because of an influential book called Bringing Nature Home: How You Can Sustain Wildlife with Native Plants, by Douglas W. Tallamy (Timber Press, updated, 2019). A well-known American professor in entomology and wildlife ecology, Tallamy argues that with urban sprawl, we’re gradually losing our native birds and other wildlife because of the destruction of native plants and ecosystems. Native species of flora and fauna support each other, having co-evolved over a long time. Nonnatives just don’t fit in.Home gardeners can help by planting more natives to support local biodiversity.

The trouble is ,not all natives are suited to urban spaces. That’s where some research is required. For any gardener, the challenge is finding the right plant for the right place. Suitable spaces with decent soil, light and water conditions are needed for these plants to thrive. Choices depend on the kinds of birds, bees and other wildlife species that you wish to attract. Different species require different plants. 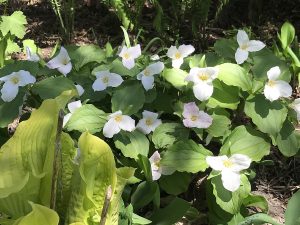 After many trials—not all successful—here are a few favourite native plants that work well in my urban garden.

Spotted Joe Pye weed (Eutrochium maculatum)— This tall, billowy Ontario native attracts many pollinators, including bee and butterfly species. It grows well in my garden, preferring partial shade and moist soil. With a light layer of mulch at its base to help the soil retain moisture, it will also grow in sun. In mid-summer, it bursts into bloom with large clusters of pink tubular-shaped florets. It looks especially beautiful at the back of a garden. Despite being named “weed”, it’s definitely a plant worth getting to know.

Bloodroot  (Sanguinaria canadensis)—Native to eastern North America, this low-growing spreader is one of the earliest of the spring ephemerals to appear in my garden. With delicate white petals, it puts on a real show when few other plants are blooming. It’s called ‘bloodroot’ because of the bright red sap found in its underground rhizomes. In the wild, it grows by marshes and streams and prefers moist soil.

Turtlehead (Chelone)—This clump-forming perennial produces pink, purple or white hooded flowers that resemble a turtle’s head—hence, the name. It is a late summer bloomer that prefers moist soil and partial shade. In the right spot, the turtlehead grows about a metre high.

Butterfly weed (Asclepias tuberosa)—With bright orange and yellow flowers, this is a showy plant for any sunny pollinator garden. It blooms in profusion in my front garden, needing minimal care and preferring well-drained soil. Butterfly weed is a nectar source for many butterflies and a food source for caterpillars of the monarch butterfly.

Cardinal flower (Lobelia cardinalis)—I spied my first ruby-throated hummingbird last summer soon after planting these beautiful scarlet flowers. Cardinal flower is definitely high on my ‘best plants ’list, a nectar source not only for hummingbirds but also for butterflies and other insect species too. This perennial grows best in full sun to partial shade and requires moist soil, especially in early spring.

Wild ginger (Asarum canadense)—This lovely ground cover with heart-shaped leaves is well suited to a shady woodland setting. It is a low-growing, clump-forming plant that successfully chokes out weeds but is not an aggressive spreader. It is so named because its roots have a sweet, ginger smell and taste. Wild ginger is drought tolerant. Canada’s Indigenous Peoples used it for medicinal purposes. 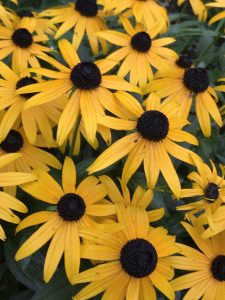 White trillium (Trillium grandiflorum)—This white, provincial flower of Ontario is a loyal friend that reappears every spring. In the wild, these showy flowers are found in the understory of deciduous forests, a favourite food of deer. In my own garden, it grows well in partial shade, blooming for several weeks before disappearing for another year. It is a slow spreader, taking years to form a large clump.

Black-eyed Susan (Rudbeckia hirta)—This sunny plant is always a blaze of glory in late summer and into early autumn. Fortunately, it is easy to grow in open spaces, a biennial that reseeds itself every two years.

For that reason, it is best to grow several together. Many butterfly species are attracted to this native plant, and birds will eat the seed heads over the long winter months.

Pale purple coneflower
(Echinacea pallida)—This Ontario Black-eyed Susan in full bloom. native perennial with its pinkish-purple flowers is easy to grow for
any gardener. Although there are many new cultivars on the market these days, it is the traditional purple one that grows wild. It attracts pollinators when in bloom and birds after seed heads form. It quickly self-seeds and may need to be thinned out from time to time.

It is never wise to harvest native plants from the wild. They should be obtained through a reputable plant grower. Native plant seeds usually require a period of dormancy; a cool period provided naturally by our cold Canadian winter. By not cutting back these plants in the fall, the seedpods will overwinter. Some seeds will fall to the ground and germinate. This is an easy planting method. Purple coneflower, black-eyed Susan and butterfly weed spread easily by this method.

Julianne Labreche is a member of the Master Gardeners of Ottawa-Carleton, a Master Naturalist and a freelance writer.