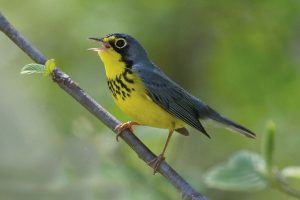 Mother Nature was the original creator of the spring fashion show, but she did things a little different. Rather than focusing on female attire, her emphasis was on how good the males look in their effort to attract a partner.

For the most part, songbirds have the most colourful families, although some ducks would give them a run for the money. It is hard to top a male Wood Duck when it comes to a vivid splash of colour. For some, this is considered the most beautiful duck in North America, handsomely dressed for a gala event. Others might whisper that he is over-the-top. Either way, he makes quite an impression.

But with ducks, the Northern Pintail leads the procession when it comes to a more formal style. The colours are tasteful, not ostentatious, but strikingly presented. A chocolate brown head accented with a white line leads to a long slender white neck and breast. Thin extended central tail feathers finish off the presentation, sure to grab attention in any northern wetland setting.

The orioles and tanagers make a bold statement, with strong solid colours. The blood-red of a Scarlet Tanager’s body is offset by inky black wings, making this species blindingly gorgeous in our deep forests — a real stunner. In more open woodlots and sometimes around our homes, the flaming orange of the Baltimore Oriole is separated by a strong black hood, back and upper breast with a white wing accent. Either bird would win an award in its particular category. They look positively tropical. 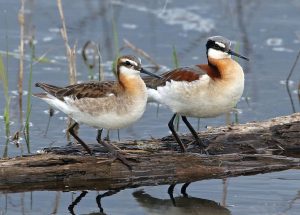 Some families of songbirds, like the warblers, change their plumage with the season, bringing out a bevy of brightly coloured males in May. Many of these small insect eaters don bright yellow and orange, even black and steel blue, but only for a few months. They revert back to more nondescript, dull colours once the breeding season is over, a protection from predators in migration and during their winter stay in the tropics.

The Blackburnian Warbler has a fiery orange throat with offsetting black and a bold white wing patch. The nickname ‘firethroat’ is very apt for this beauty. Male Black-throated Blue Warblers have inky blue above, a black throat and white below with a tasteful small white wing patch that draws the eye to attention. This bird’s colours are subtle but stylish, appropriate for any formal affair that he can attend year-round. This is one species that doesn’t diminish its look in the off-season.

Perhaps the most common warbler in the region sports an egg-yolk yellow colour, accented by reddish stripes below. The Yellow Warbler’s presentation and demeanor exhibit a cheery outlook on life, a welcome sight and sound throughout the breeding season in a variety of habitats, even in some city yards. With a song mnemonic acclaiming ‘sweet-sweet-sweet, shredded wheat,’ it offers us the best to you each morning and an upbeat attitude throughout the day.

Nothing says good times are ahead better than the Eastern Bluebird. The bluebird of happiness is  stunningly deep-sky-blue above and Robin-red below, trailing to white underparts. The Robin connection is familial as these thrushes are cousins. The bluebird is in its glory in bright sunlight when the feather structure produces this dazzling colour to the delight of his mate, as well as human admirers. On dull days, the colour is less intense, but even then, he is a showstopper.

While much of our attention is on birds whose songs are as sweet to us as their appearance, some shorebirds join in the colour parade. For the most part, these transient Arctic breeders are heavy on the browns and whites, but males of some species are decidedly colourful in the spring. The Red Knot, for instance, has a reddish-brown head and underparts, while the Blackbellied Plover’s strong black and white pattern is unmistakable. Each reverts to nondescript colours in the fall.

But Mother Nature is not one to keep the rules constant, throwing us a curveball. For the needlebilled phalaropes, the breeding roles are reversed and so is the attire and behaviour. Males of these shorebird species are the ones sitting on the eggs, so camouflage is more important for them. That means females sport more colourful plumage and, as it happens, will also have multiple partners. The females are the ones that defend the males during the nesting period and while the males are rearing the young. Talk about role reversal.

When it comes to nature, there is such a variety of plumage that there is something for every taste. There are loud, noisy birds with an equally loud feather pattern, like the Blue Jay. Softer but still appealing colours coo to us with the doves while there are plenty of everyday colours in the sparrows. To each his or her own.

Brian Morin is the publisher of Ontario Birding News, a newsletter for birding enthusiasts. He has been actively involved in watching and photographing birds in Ontario for more than 40 years