“That old shed is his studio? Really?”

My father smiled as he took my arm and guided me along the ragged stone path to a wooden garden shed. The artist was expecting us. He held the door open wide and gestured towards two canvas chairs on the far side of his workbench.

The setup reminded me of a school chemistry lab, complete with Bunsen burner and glass tubes. But these were the tools of his art — amazing artistic designs, as I was soon to discover — not uninteresting high school experiments. 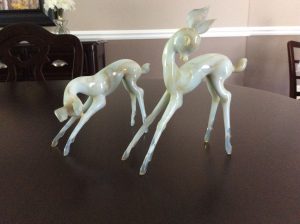 The flame flared on the burner. The artist heated two glass rods, one opaque and one transparent, and brought them together. I watched fascinated as he twisted the softened glass in the flame, manipulating and blending until a deer emerged, a carefully wrought fusion of the pale green opaque and translucent raw material. I gasped at the beauty of the delicate sculpture that he had formed from the molten glass.

He acknowledged my reaction with a slight smile as he placed the deer at one end of the bench to cool and harden and picked up two more glass rods. Soon, a second deer stood beside the first, as graceful and elegant as its partner but in a different pose, this sculpture bowing a little and turning its head towards me as I sat in awe.

My father’s special gift for my sixteenth birthday was complete.

“A gift fit for a princess, ”he said, pointing out that the silver-haired creator of art in glass had made a similar sculpture for Queen Elizabeth II, then Princess Elizabeth, when she married Prince Philip.

The two deer, carefully wrapped in a sturdy cardboard box, rested on the floor in front of me as we drove home.

“That’s the safest place, Dad. They can’t fall off the floor.”

“They’ll be fine. That’s a good box,” he grinned, pointing out that all his boxes were good quality.

Making cardboard boxes was his business in those days. Running the company paid the bills but gave him little pleasure, so he rarely joked about his mundane job. But this was a special day and the light-hearted quip came easily, adding one more layer to a happy memory.

Before the war, in his native Austria, my father neither knew nor cared about the quality of cardboard boxes. He had been on a completely different career path. The eldest child of a family bankrupted by the aftermath of the First World War, he had put himself through university in Vienna, working full-time and taking classes whenever he could. He had just reached his goal of becoming a lawyer and seemed to be on the verge of a bright future.

Then, the prize he had sought for many years was snatched from him. He had been practising his profession for just a short while when Anschlüss — the annexation of Austria by Nazi Germany in 1938 — signaled the end of normal existence for him.

He was one of the millions of Jews persecuted for his faith and his opposition to the Nazi regime. He was thrown into a concentration camp, just before the outbreak of the Second World War. He was one of a handful of prisoners who escaped from Dachau — he would never talk about how or explain the deep scars on his back — and made his way across Europe to England where my mother, who had reached safety a few months earlier, was waiting for him.

He joined the British army shortly afterwards, serving until the war ended. By then, he was too far removed in space and time from his original career path to turn back. Starting over is always difficult. Starting over after being persecuted, imprisoned, tortured and forced out of his homeland, plus six years of active service in the British army, was 10-times more difficult.

While he was deeply grateful to England for giving him refuge and very proud of his British citizenship, he never completely recovered from being wrenched from his past. His back bore the
marks of his physical suffering. His eyes told of his spiritual scarring. It had taken tremendous courage and will to keep going, first in a concentration camp and, later, in rebuilding a life in a new country. He coped, but survival had its limits for him.

To work as a lawyer in England, he would have had to study for at least three years and to take bar exams once more. The thought was simply too much for him. His belief in the power of law had been a driving force once. That was before the rise of Nazi Germany and the horrors of the Holocaust. With the loss of his idealized view of the value of law, he had also lost the will to study it.

The Nazi evil had taken more than his freedom. The war years had done more than disrupt his career. The joy he once felt in learning for its own sake was gone. He no longer thought in terms
of a personal or professional future. Life had become simply a matter of day-to-day survival.

But he still believed in the value of hard work. So, he took an entry-level job as a clerk in a cardboard box factory. He worked long hours and learned the business quickly. Within two years, he set out on his own and built a viable small business. It fulfilled the purpose of providing for his family, but it never fulfilled him.

It did, however, assuage the guilt he felt that his wife had been forced to work full time, as well as keep house for six years, while he was in the forces.(Views of appropriate marital roles were different in those days.) He did his duty, but could take no joy or professional satisfaction in cardboard boxes, although he did take some pride in providing his customers with quality products. Always fiercely protective of his family, he was often sad and silent, perhaps recalling his pre-war days or his own father’s death in Auschwitz. Another wartime legacy was the guilt he shared with many other concentration-camp survivors: the shame of having lived when others had died. He felt unworthy at having been spared and that is a hard feeling to wake up to each day.

And he never escaped the memories. He could not, for instance, bear to be anesthetized by gas when he had to have a tooth pulled. He also happened to be allergic to the medication used in dental injections just after the war. His solution? No anesthetic. He could stand the pain, but not the associations that accompanied the use of gas.

I didn’t understand all of this as I was growing up. If I could pinpoint the time that I put it all together, it was seeing his pleasure in my joy on the day of the deer. Sharing the creation of the sculpted beauties held no shadows of the past for him and was full of joy in the present for me.

More than half-a-century later, the deer still hold pride of place in the display cabinet in my living room. Whenever I glance across at them — and I look their way often — I remember the visit to the ordinary shed to see an extraordinary artist at work. And, of course, the deer carry a special memory of my father and all that he did to make life move smoothly for me.

He was born in Dusseldorf, Germany, while his father, a Hungarian civil engineer was working on the building of the Rhine bridges, and the family later returned to Budapest, Hungary.

His interest in glass began when he was a science student in the 1920s. At that time, the students had to buy or make the glassware they needed for laboratory work. He discovered his talent for
glassblowing and supplied his fellow students with the glass containers they needed for their studies.

He also turned to producing artistic glassware in his spare time.

He used a Bunsen burner and either solid or tubular coloured or opaque glass rods to make his glass sculptures.

His career as a professional artist began with the first exhibition of his work — sponsored by one of his university professors.

By 1931, he had won a number of awards for his work and was described in Italy as “the Michelangelo of glass.”

He moved to England in 1937 after marrying Ruth Stratford, a Londoner, and the couple settled in Surrey, where he continued to live after his wife died in 1950.As a single parent, one of his joys
was making glass figurines for his three children.

The British monarchy was among a number of royal families who collected his work.

Some of his pieces are displayed at museums in England and Budapest.