Botanical names are steeped in history 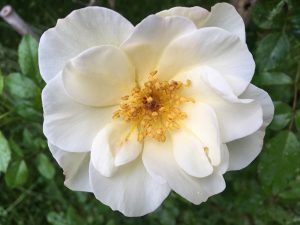 In many traditional societies, knowing the true name of a thing or person is believed to confer power over that thing or person. So, it is with plants. Knowing the botanical name for a plant gives us the power to understand how best to treat that plant.

A plant’s common name can reveal intriguing snippets of its social history. Lungwort (Pulmonaria spp.),for example, gets its name from ancient and medieval homeopathic beliefs. The spotted leaves were thought to resemble a diseased lung, so the plant was used extensively as a treatment for congestion and other lung  disorders. However, common names can be deceptive. Just think how many different plants sport the common name brown-eyed Susan!

I would like to focus on formal names — on both botanical names (genus and specific epithet), and cultivar names. Canadian garden writer, Sonia Day, calls gardeners who use botanical names “hoity horts.” Many gardeners would probably agree! Botanical names seem unfriendly and hard to pronounce. To make matters worse, genetic bar-coding is leading to the reclassification and thus renaming of many plants. I had no sooner learned how to pronounce Cimicifuga than this genus in the buttercup family was moved into the more prosaically named genus
Actaea. 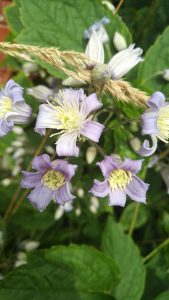 There are advantages to using botanical names. Most importantly, they bring precision to horticultural discussions. Botanical names stay the same no matter what language the gardeners speak. And once we learn to decipher them, they can tell us a lot about the plant. Two books were especially helpful in my journey to understand botanical names: Horticulture: Plant Names Explained – Botanical Terms and their
Meaning by William Stern; and the wonderfully irreverent Bill Casselman’s Canadian Garden Words.

The specific epithet, the second part of a botanical name, can tell us the preferred habitat of a plant. Inmy sandy garden, I can expect plants with names such as ammophilus (sand-loving) or arenarius (of sandy places) to do well. With all the limestone substrate in the Ottawa area, plants with the monikers calcareus (chalky or of limestone) and calcicola (growing on limy soil) should thrive. In an open, sunny area, we
might find agrarius (of fields) plants,while paludosus or palustris plants would be found in marshy areas.

Some names are easy to decipher. Most people would be able to guess that aquaticus plants grow in water. However, the vagaries of Latin grammar can complicate things: aquatilis plants grow near water. Some botanical names tell us where a plant originates. Plants native to our part of the world may be named canadensis, virginianus, and novaeangliae. Plants originating in China may have sinensis or sinicus in their name or possibly hupehensis (from Hubei province) or yunnanensis (from Yunan province). For our climate, sibericus plants are often a good choice, since they hail from the equally harsh environment of Siberia.

Botanical names can be surprisingly poetic. A Master Gardener friend describes how she fell in love with botanical names as an eight-year-old Brownie, earning a badge for learning about a new plant. She chose a plant from a nearby swamp. The botanical name — Calopogan pulchellus — reminded her of church music.

When a plant specimen has an especially desirable characteristic, it is often given another identifier called a cultivar name. Cultivar names are placed in single quotations. They may reflect the breeder’s whimsy, provide a description of the plant or reflect an important occasion, but I especially like the ones named for people. For several years, I grew a Ukrainian heirloom tomato called ‘Cosmonaut Volkov,’ named
after the famous Russian cosmonaut. Another Russian heirloom tomato, known for its distinctive ,sweet and smoky flavour is named ‘Paul Robeson,’ to honour the actor’s defiance of the infamous McCarthy Committee on Un-American Activities. One of my favourite heirloom tomatoes is‘Dr.Wyche’s Yellow,’a big yellow beefsteak variety. Dr. Wyche owned Cole Brothers Circus and fertilized his gardens with elephant
manure.

Living in Ottawa, we cannot ignore the work of Canada’s first professional female hybridist, Isabella Preston, whose work with lilacs at the Central Experimental Farm, beginning in 1920 resulted in hardy lilacs that thrive in our harsh conditions. The Preston hybrids are denoted as Syringa X prestoniae (the X indicates a hybrid) and she named many of her
cultivars for Shakespearian heroines. Several Canadian Governors General have been honoured in cultivar names. In 2003, a peony was named‘ Adrienne Clarkson. ’On May 10,2010,Princess Margriet of the Netherlands presented Michaëlle Jean with Tulipa ‘Michaëlle Jean’— one with deep maroon petals chosen to reflect the then Governor General’s personal tastes.And Lieutenant Governors can aspire to plant name honours, as well. Fittingly, Lois Hole, famous Alberta plants woman and the province’s Lieutenant Governor from 2000 until her death in 2005, has a tree named after her. Ulmus parvifolia ‘Lois Hole’ is a dwarf Chinese elm developed from the variety ‘Frosty,’ which seems just right for Alberta’s climate.

I’ve secretly always wanted to have a plant cultivar named after me, so I was thrilled to discover a rather glorious red clematis cultivar called ‘Rebecca.’ Of course, I had to have it, but sadly it did not survive it first winter in my garden. I’m trying not to take its failure personally. It turns out that I have to grow species clematis in my garden. By the way, the ‘Jackmanii’ clematis is named in honour of the pioneering clematis breeders George Jackman (1801 – 1869) and his son also George Jackman (1837 – 1887).

Perhaps my favourite story is about the clematis cultivar, ‘Mrs. Robert Brydon,’ a bush-style clematis that appeared as a spontaneous hybrid volunteer in the garden of Elizabeth Prentiss of Cleveland, Ohio sometime in the 1930s. Robert Brydon was the Prentiss’s gardener, and I love that the humble gardener’s wife is remembered in this way.

There is so much history, geography and fascinating folklore tied up in plant names. The study of them could fill several books. n

Rebecca Last has been a member of Master Gardeners of Ottawa Carleton since 2005. Her small suburban garden is certified by the Canadian Wildlife Federation and includes elements of permaculture. Rebecca’s gardening addiction has been enabled by her husband, Richard, and a collection of spoiled rescue cats.