Take the time to make your decision 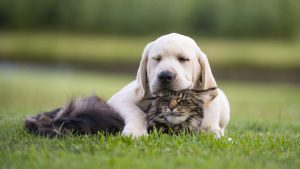 You are never alone when you have a furry friend ready to welcome you home. You also know that stroking a furry animal is good for your health. It lowers your blood pressure and keeps you calm. Animal antics make you smile and sharing your life with an animal is always rewarding.

Animal lovers everywhere, agree on this part of the equation on pet ownership, but are often divided on whether they want to share their lives with a dog or a cat.

It has never been an issue for me, simply because I have always loved dogs and cats equally and I have been lucky enough to have both sets of animal companions — with very different personalities, not entirely defined by species or breed — for most of my life.

But for many of the self-labelled dog or cat people, a great divide exists. While the preferences are partly due to the differing general characteristics of the animals, they are also fed by the personality differences of their owners and the owners’ lifestyles.

For example, dogs, as pack animals, tend to be outgoing and social and, therefore, a better fit for extraverted individuals, while cats tend to be independent loners happily at ease with their own company, just as introverted human beings are.

The human-dog bond began with wolves following hunters and gradually evolving into domesticated dogs as protectors and companions for their humans. Socialization, loyalty and interdependence grew naturally between the two. Meanwhile, cats over the ages retained a sense of mystery. They were feared because of the legendary association with witches and spells and revered as sacred in ancient Egypt. Across the world, their relationship to big cats such as the lion, the king of the jungle, was never forgotten. They were also seen as symbols of good or bad luck. For instance, in England, a black cat means good luck, whereas a white cat carries the opposite label. The reverse is true in North America, where black cats are the hardest to find homes for and white cats are believed to be lucky. Luck or a stray coming to your door looking for a home aside, the choice between adopting a dog or a cat has as much to do with personal circumstances, as it does with a strong preference for one or the other. Someone who lives alone and works long hours outside the home, for instance, is not well-suited to dog ownership. Although a dog is a social, pack animal, he needs companionship and should not be left alone too long. In addition, dogs need to be walked at least twice a day. They also need access to a bathroom space outside. By contrast, cats like to sleep much of the day and are less dependent on human companionship — though a two-cat household is frequently a happier place than one with a lone feline. Cats also create their own exercise by playing indoors, particularly if they are supplied with toys and catnip. They are also easily trained to use a litter box (but the most meticulous cats will continue its use only if it is cleaned daily). So, on one level, cat care requires fewer time commitments than dog care. If, as well as working long hours and having a busy social life outside of the home, the owner lives in a high-rise apartment, the physical act of getting a dog to the right patch of grass in good time for elimination may be an issue. The health of the owner and the individual’s ability to give
a dog the appropriate amount of exercise is another reason for being concerned about whether a dog would be happy in the partnership. When time limitations and location are taken into consideration, a cat may seem the simpler choice. This is probably true, provided the cat is either comfortable being left in someone’s care when the owner travels, or can be left at home with regular visits from a caregiver. In general, it is easier to travel with a dog, rather than attempting to take a cat away from her home environment. And one more thing: cats tend to be longer lived than most breeds of dog (especially larger dogs). Therefore, the owner has more years to be with the beloved animal and that alone may tip the balance towards cats. Of course, these generalizations may not all apply to some breeds of dog or cat or to an individual animal. The Burmese cat, for instance, has often been called “the dog cat” because he exhibits a degree of affection and interest in the owner usually more associated with dogs. And the tranquil Shar-Pei is less perturbed about being alone for some hours than most breeds of dog. Most important is providing your pet, dog or cat, with the love, stimulation and understanding that he needs to be happy Companionship is a two-way street.

Almonte, Ontario writer, Iris Winston, is a former Executive Director of the Canadian Federation of Humane Societies. She has been an animal lover all her life. Her pets have always been
important members of her family.