Joy Fielding is one of Canadian fiction’s most successful authors, with four decades of best-selling books to her credit. Success for her, though, is making a difference for readers.

More than four decades have passed since Joy Fielding completed the novel that established her reputation. Kiss Mommy Goodbye was the suspenseful story of a divorced man who kidnaps his two young children and of a mother’s struggle to get them back. After three earlier books, this was the one that changed Joy’s fortunes, topping the best-seller lists in Canada, and hitting the $150,000 mark in international sales.

“It was the break-through book,” Joy says. Even when writing it, she had become aware that she was onto something special. “It’s hard to remember now — it’s such a long time ago — but I knew it was different. I had stopped worrying about what people wanted to read and had decided I would write something that was important to me.”

She was “thrilled” when Kiss Mommy Goodbye did take off. “I remember when my agent called me to tell me that the book had sent people bananas at the Frankfurt Book Fair and that countries that normally never bought books there were paying fortunes for the rights. I was in seventh heaven. It was the first time I ever made decent money as a writer.”

One of Canadian fiction’s most successful careers had been well and truly launched. But Joy’s legitimate pride in her achievement is leavened by modesty, good humour and a lack of pretension. She learned an important lesson early on: popular fiction can have an impact on people’s lives, an impact that goes beyond mere escapist entertainment.

Her keen interest in how society works is reflected in her writing. Consider her latest novel, The Housekeeper, which takes a clear-eyed look at the crises that can afflict the elderly.

The book is just out, and Joy finds it difficult to believe that it’s her 30th. And in a sense, it happened because of Covid. Joy, who maintains homes in both Toronto and Florida, had initially planned to take a break after completing a previous book, Cul-de-sac, in 2020. But then the pandemic arrived.

“With travelling and socializing no longer options, I found myself with nothing to do,” she writes in an afterword to her latest book. “Initially this was okay, as I had too much anxiety and too little focus to do much of anything ….I could barely read a book, let alone write one. But as the months wore on, an idea started forming, and The Housekeeper is the result.”

Joy Fielding is 77 now, but neither she nor her novels live in the past. With the tautly-written The Housekeeper she zeroes in on generational tensions and the vulnerability of the elderly in a sometimes predatory world. Her narrator, Toronto real estate broker Jodi Bishop, initially thinks she is doing the right thing when she hires the “perfect” live-in housekeeper for her crusty 79-year-old father and her physically ailing mother. It’s only later that she begins fearing that she has brought a sweetly manipulative monster into her parents’ home.

Family looms large for Joy — not just the challenging family dynamics she explores with such assurance in her fiction but also the joy that family has brought to her own life. She thinks back to the parents, book lovers themselves, who were so supportive of her aspirations and then talks about the husband of almost 50 years — lawyer Warren Seyffert — who has been always been there for her, all the way back to those early struggles to make it as a writer.

“I married a man who gave me security — the luxury of not having to work at anything else but my writing, if I so chose — although I did hold lots of jobs until I was writing full-time.”

Joy is now a grandmother. But family members are there to manage her personal website and social media accounts. And the fact that she’s now part of the cyber universe reminds her just how long she’s been around.

She was confronted with a moment of truth when her novel, Puppet, appeared in 2005. “I had the heroine going into the research library to go through some old newspaper articles!” she exclaims in mock horror. “One of my readers wrote me and said — why didn’t she just go on the internet? And I remember thinking at the time — why that never occurred to me! I still wasn’t up to those things. It had been traumatic enough for me to switch from a typewriter to a computer.”

Joy would now embrace this once forbidding world. By 2019, she was confident enough to enter it fully with All The Wrong Places, a novel about a psychopathic killer who stalks women both online and in real life. “It had been kind of in my head for a number of years to look at the world of online dating — to take women of different ages and circumstances to see how it affects their lives.”

Books like All The Wrong Places and The Housekeeper are powerful psychological thrillers, but despite her many successes in this field, Joy resists being pigeon-holed. 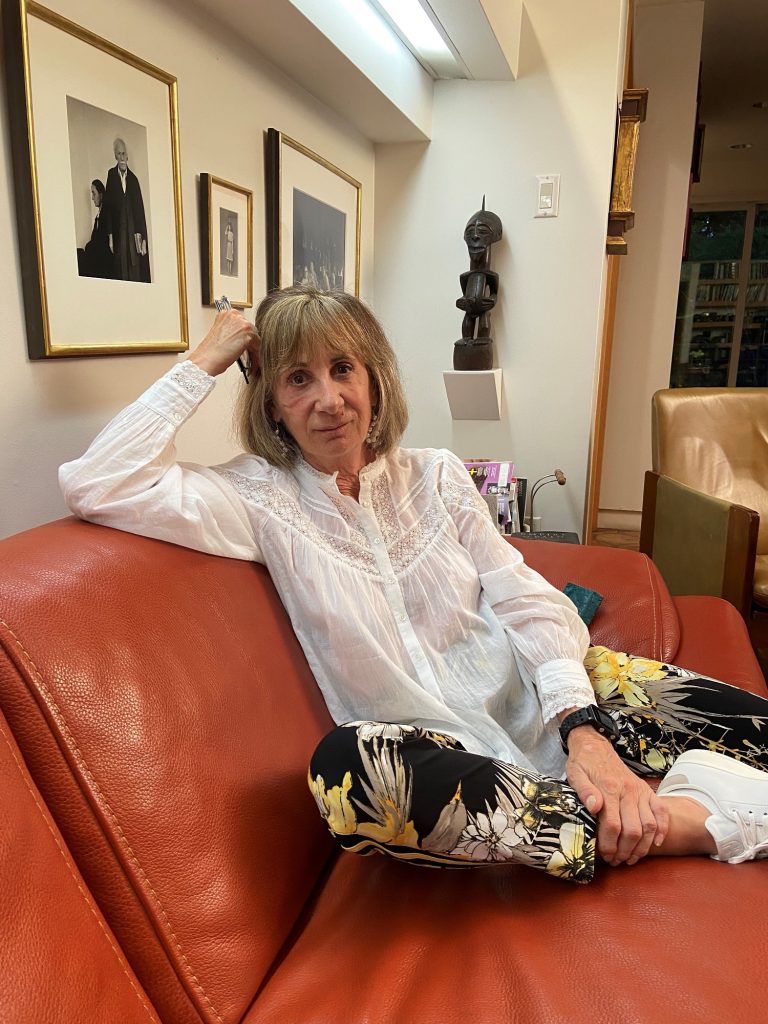 “I’ve never felt that I write in a particular genre. I’ve always tried to mix things up. I very purposely try to write a different book every time out. I hope that what they do have in common is that they’re page turners, that there’s a good plot, and that the plot is driven by character.”

She cites two novels in which she takes particular pride: The First Time, an affecting examination of a disintegrating relationship, and Grand Avenue, a sweeping study of friendship over a span of two decades.

If you ask her how it all started, she’ll take you back to her wonderfully happy Toronto childhood and to this eight-year-old kid named Joy Tepperman writing her first story. “It was a page long and about an eight-year-old girl who loves to dance but dies. Then the villagers look up at the sky one night, and there’s a new star in the heavens, and one of the villagers says — ‘Oh look, there’s Hilda the dancing star!’”

Her urge to write was already firm, but when she entered University of Toronto in 1963 to major in English, she became involved in campus theatre and discovered that she also had a love for acting. “I thought I could both write and act but I definitely got sidetracked into more acting.”

Because she was bitten by the acting bug, several things happened: She appeared in a pioneering Canadian movie. She headed for the bright lights down south. She hung out with a topless dancer and a hooker in Los Angeles. She appeared in an episode of Gunsmoke. She was kissed by Elvis Presley. And she was back home in less than three years.

“Los Angeles can be a pretty soul-destroying place. Here I was, quite a naive young Canadian girl, and my immediate neighbour was Francine, a topless dancer, and another neighbour was a hooker who had a baby. I still remember going with the hooker to pick up her baby from the woman who was babysitting for her.”

The apartment she occupied on bustling Sunset Boulevard was a gateway to another world in which she learned about survival and the diversity of human experience.  Getting to know these people as real human beings would contribute to her personal growth and would help shape her future. “They were really quite lovely to me.”

But she knew her life was at a standstill, and her mother had not stopped reminding her that she could write — and should be writing. “So I packed up my budgie and my little dog and came home to my parents and started writing.” Today she has four decades of best-selling books to her credit.

“As a writer you write about the subjects you need to explore,” Joy says now.  As for her devilishly clever plots and skill at conjuring up nail-biting suspense — well, they are less important

“I’ve never considered myself a writer of mysteries or whodunnits,” she insists. “I don’t really care about that aspect. I am much more interested in why they done it and in the relationship angle — men and women, husbands and wives, mothers and daughters. To me that’s what makes the story interesting.

Indeed, the real measure of success for Joy is to know that she has touched a reader in some way. That first happened to her all those years ago with Kiss Mommy Goodbye.

“I got a letter from this man who had kidnapped his children after a divorce, but when he read the book, he understood what he had done and took the children back. That was a touching and powerful moment for me. I’ve had a number of moments where people write and tell me how a book has helped them through some unbearable tragedy in their lives and given them hope. It’s always a profound experience for me when a book affects someone this way — to think that it makes some kind of difference.”

When Joy was living in Los Angeles, her sister visited her and they decided to go to Las Vegas for the weekend because Elvis Presley was performing there at the International Hotel. They managed to get a room, and were bold enough to ask the desk clerk what floor Elvis was on. “They told us! I can’t imagine that happening today.” So they joined other fans lurking outside Elvis’s suite, hoping he might come out.

“Sure enough he came. He was very gracious and gorgeous, and then one of the girls shouted — Elvis, kiss me! So he started going around, kissing all the girls on the cheek. I was a little shy, and kind of hung back, but he spotted me, beckoned me forward and swept me into his arms and gave me this extraordinary kiss on the lips.”

Woman of Many Hats