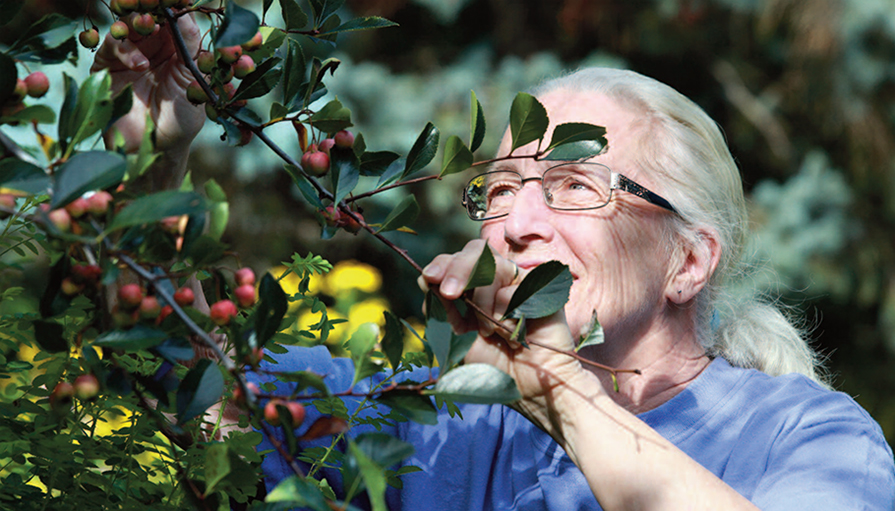 By Madeline Kallio and Photos by John Major

Paying It Forward
A life of giving back has grounded Lynn Kaplansky in nature and compassion.

“Everyone gives you something; you hope that you can give them something back.” Growing up with supportive parents who never restricted the freedom of the four siblings in Lynn Kaplansky’s family, they were free to pack lunches and take the whole day to explore the forests near their home in Montreal. “We didn’t have any formal guidance; we just absorbed stuff.”

They were allowed to fail. Lynn’s favourite subjects in high school were math and science.She just assumed that when she graduated, she would attend nearby Macdonald College (the then Agricultural and Teachers’ College arm of McGill University) and become a teacher. Her teacher suggested that it would be advantageous for her to go to McGill and obtain a science degree, so she did. At McGill she met and, in 1966, she married the love of her life, Marvin.They have always had a great mutual respect for each other and; although their interests throughout the years have always been very diverse, they have been together for 50 years.

Marvin has always been supportive of all of Lynn’s ventures, except when she suggested that she would like to learn to fly. She recalls him saying, “Please don’t!” While Marvin finished his PhD and did a couple of Post-Doctorals in other parts of the country before finally settling in Ottawa,Lynn’s degree helped her find employment; and, with her innate ability to absorb knowledge from around her, she worked her way into interesting jobs in scientific fields. When her first son was born,Lynn settled for a short time to being a wife and mother. One day, she met a lady from the neighbourhood who was involved in Girl Guides and it sparked the flame. 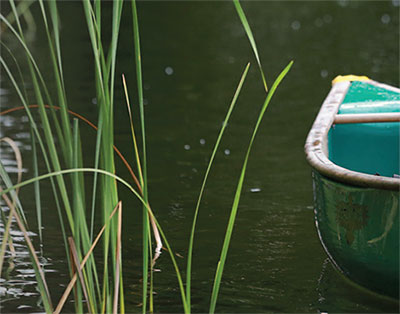 When she was a child, she had been a Brownie and a Girl Guide since “there wasn’t much else to do in the neighbourhood.” She and her childhood friends had continued to belong to the movement until they were well into their 20s, so she was well grounded in Guiding. She decided to become involved again, after an absence of fourteen years, so she bundled Dan up and took him to all of the Guide meetings and camps. Shortly after joining the movement, the other lady left and Lynn took over the pack. When he was old enough, Lynn enrolled Dan in Scouts and he still continues to be active.

Over the years, she has worked with all levels of Guiding and has been in charge of all the branches. Her involvement has taken her to international camps in Mexico and locally. One of the commissioners was a super person who was particularly innovative; she and Lynn were responsible for initiating plastic recycling and painting the yellow fish on storm drains. The highlight of her Guiding experience has certainly been to see young girls blossom with their involvement. “To see a kid’s eyes light up when you have told them something — that is the best!”

Getting a chance for international travel and to participate in summer camps is surely one of the rewards, as well as making many close friends which she still cherishes. Now that she is older, she takes a less active role in some of the activities, but still stays very involved. She leads Sparks and a Brownie pack on a weekly basis and helps sell Girl Guide cookies. For her many years of service, Lynn has received the Guiding Medal of Merit and the Queen’s Jubilee Medal, as well as the Canada 125 Medal from the City of Ottawa.

The 1980s were an exciting time when so many changes were taking place in the business world; and employers were scrambling to find qualified staff. Looking for a change in career after deciding to go back into the workforce, Lynn took a course in technical writing at Algonquin College. Since so many new systems were being introduced and employees needed to be trained, there was a great need for technical manuals. When postal codes were instituted, Lynn worked on the postal code manual. She also worked on computer manuals for various groups during this time of ever increasing dependency on computer systems.

In the early 1980s, the Museum of Nature was looking for enthusiastic naturalists to teach their school programs. Knowing that this would be a perfect fit for her interests and qualifications,Lynn volunteered. As an avid outdoors person, along with her work with Guiding, she had continued to build her environmental comprehension through the years. Exhibits in the museum provided the base material for the program outlines and the instructors enhanced the sessions, depending on their individual knowledge and interests, and the needs of the classes.

The exhibits, the specimens, the resources of the museum were not lost on Lynn who sucked up all the knowledge that she could and fed it back to the students. Every scrap of information she gained added to her depth of personal material she could use in the programs and in the field, as well as in her other pursuits. The instructors were also privy to the depth of material behind the scenes in the museum, a wealth of natural history and artifacts, and had free access for themselves and their families to the museum. Although she no longer does summer programs,Lynn volunteers at least once a week during the school year. 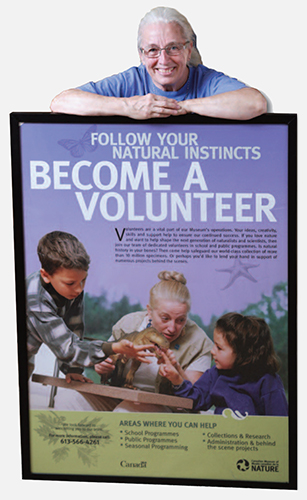 A few years ago, the museum was renovated and the large welcoming poster at the museum entrance, which featured Lynn, was changed. As one of the rewards for her service, she was given the poster and it is now framed and meets friends and family as they enter her home. A big bonus for volunteers is free family admission for as long as they continue to volunteer. In the late 1980s, a group of concerned environmentalists from government and non-government organizations decided to bring together those promoting wildlife and wildlife habitat; and the National Capital Region Wildlife Festival came into being.

Activities were organized during National WildlifeWeek in April; and, very early on, the Girl Guides became an active member with Lynn at the helm. I became the Coordinator for the Festival in the late 90s. Activities included a weekend exhibit at a city shopping developed a number of interactive games for children which she brought to the event; and she was usually in charge of the face painters and the teenagers who wore the mascot costumes. One year, she and I were the only two available on the Sunday to dismantle the exhibit and the shopping centre had locked up all the trolleys.

The task was more than overwhelming since we had to move all of the tables to storage on a shopping cart! For a few years when funding was available, the festival was able to invite schools to have their students submit posters related to the theme of the festival. The winning classes were bused-in to the Museum of Nature for a day of awards and activities. For a number of years, the festival also had a galaAwards Ceremony at the Museum for groups and/or individuals who had contributed greatly to protecting and preserving the environment.

The Girl Guides were chosen for the first presentation and Lynn still has the wooden chickadee which was hand-carved by the Outaouais Wood Carvers. The nature walks were always a big success and Lynn was one of the naturalists who led the walks. Slide shows at local libraries gave the public an opportunity to learn more about the environment and wildlife. Lynn graced us with an informative slide show on her trip to Bathurst Inlet. Group hugs, closing luncheons and lasting friendships epitomized the group throughout the years.

The meetings were exciting and innovative with interested participants who offered ideas which the team could put in motion. We were blessed with having on our team some of the most knowledgeable and influential environmentalists. Meetings were held at the Canadian Wildlife Federation, and later, the Fletcher Wildlife Garden on the Experimental Farm. On nice days in summer when we were at Fletcher, we would sit outside and enjoy the gardens and the wildlife. Funding ran-out for the Festival after 2011. As a last hurrah in 2012, the Festival was invited to join the Governor-General’s celebration of Doors Open Ottawa.

A wildlife centre from Muskoka joined us with an opossum, a snake, a porcupine and a lot of knowledge. The Girl Guides were one of the few organizations which braved the all-day pouring rain to set-up and meet a few thousand people who came out to visit. Lynn also participated in establishing online GeoSearches in the Experimental Farm and at the Governor-General’s estate.

So that these many years of promoting the need for wildlife conservation would not be forgotten in our basements, Lynn contacted the Ottawa Archives and together we deposited all the documents and photos of the Festival, which will soon be available online and for researchers who might like to resurrect the Festival. Occasionally, the core group gets together to catchup and share memories. 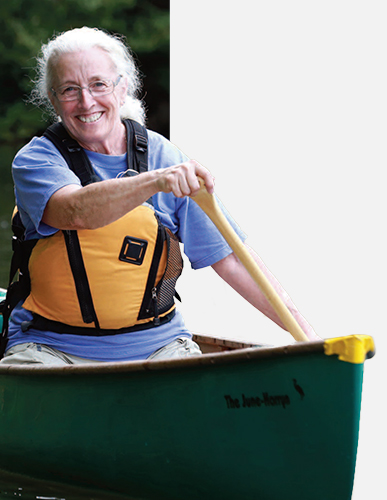 As well as all her work with organizations, Lynn takes time to pursue her special interests. She explores the natural areas in and around Ottawa. A couple of times a week, in early morning and when conditions are ideal,Lynn pulls her canoe on wheels a kilometre from home to canoe in the solitude of Mooney’s Bay.

A little further afield, she has taken some awesome canoe trips. A 10-day trip with a small group down the Dumoine River in Quebec, one of the most beautiful free-flowing rivers in the Pontiac, added greatly to her storehouse of memories. A week of canoeing a river in the pristine wildness of the Yukon was “an incredible experience.”

She has canoed several rivers in Ontario; and has passed on this love to her son and his family who have already introduced their under two-year-old to the sport! A trip to Bathurst Inlet in Nunavut with a friend was a once-in-a-lifetime, dream come true. Exploring the sparsely settled area, they were able to identify and photograph an incredible number of animals and plants.

Since that time, Lynn has shared her experiences with schools and other groups. The trip was especially interesting because of the diversity of wildlife and the effects that climate change is having on them. Lynne delights in her small garden which is surrounded by cedar hedges which provide shelter for the birds that crowd her feeders.

She finds it hilarious that her indoor cat goes crazy when he sees the birds through the window but can’t reach them! Her degree in science did not prepare her for her role as a naturalist nearly as much as her early experiences in the woods and fields. Although she has had no formal training to share the environment with others, over the years she has “learned a little about a lot of things” and is certainly more knowledgeable than those with whom she is sharing.

The time she has for reading is spent on “garbage” mystery books and tomes of natural science. Her home is close to trails and she enjoys biking there. Her hands, like her feet, seldom stay silent even while watching television when she knits the pocket size Izzy Dolls for children in third-world and war-torn countries.

A few things she has learned and hopes to pass on to others is that one should never be afraid to ask for help since, as John Donne poetically stated, “No man is an island.” Although she has managed to succeed at most of her endeavours, she is constantly aware that failure is a part of our learning process and it is OK to fail; just keep trying.