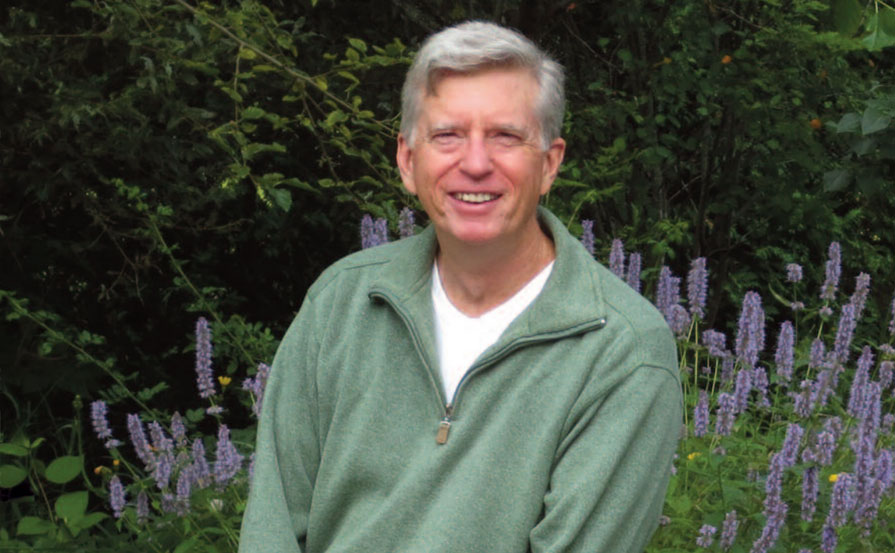 By Ariel Vered and Photos by Brenda Hensley

Seeds of Success
Mark Cullen has spent a lifetime inspiring people to plant gardens and see them grow.

“We will change the world one plant at a time,” says Mark Cullen. Mark has established himself as a gardening media personality trusted by Canadians. Just as he continued his father’s horticulture legacy, Mark is welcoming his son Ben into the family business. The father-son duo is working to seek ways to engage young generations of Canadians in the social and environmental benefits of gardening. Early years of gardening Mark came to the gardening business by way of his father Len, who befriended an English gardener, John Weall, on his paper route in north Toronto.

“John took my father under his wing when he was 16 years old,” recalls Mark. Weall enlisted Len Cullen’s help digging up perennials in his backyard to transfer to a client’s yard. Len knew nothing about gardening at the time, but it began a relationship that lasted a lifetime. Cullen’s father joined Weall out of high school in the business as a landscape gardener. When his father turned 22, he bought the business from Weall.

Mark’s father had a great passion for retail so he moved the landscaping business into retail in the 1950s and it became known as Weall and Cullen Nurseries Limited. Mark, a fifth-generation Torontonian whose great-great-grandfather came to Canada from Ireland during the potato famine, has lived in Toronto his whole life — save for a stint working for Bachman’s Inc., a family-owned floral and nursery business in Minneapolis, in his early 20s.

Realizing that he needed to understand the product in order to serve customers, Mark got involved in gardening out of necessity and spent time in the garden learning. He became very passionate about promoting the benefits of gardening, which led him to media. At 26, he got his first radio show on a Toronto radio station. Out of that came his first television show and out of that came his first book. “It occurred to me early on that there’s a tremendous opportunity,” said Mark. 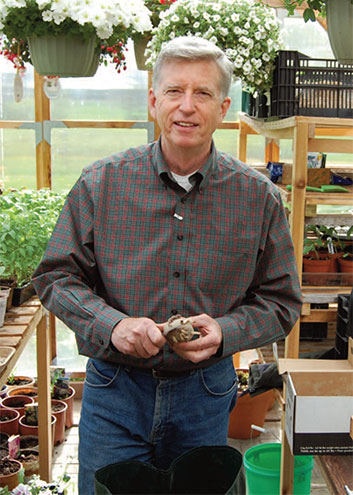 “People want good, credible, trustworthy gardening information. Everyone has a gardening question. And the media seemed like the best place to go to provide that information because it could reach so many people at once, whether it was print or broadcast.” He took over Weall and Cullen Nurseries in 1988. He sold the business to Sheridan Nurseries, their nearest competitor, in 2003. That’s when he joined Home Hardware and became their national spokesperson for home and garden.

The company carries the Mark’s Choice brand, a line of gardening tools, plant materials and fertilizers that currently features over 150 items and is growing. Mark learned everything he knows on the job. He had planned to study horticulture or marketing at university, but his father encouraged him to join the family business: “He said why would you do that when you can join me? I’ll teach you everything I know about horticulture and marketing.”

And while it worked out for him, Mark encourages people to get a formal education. He and his wife, Mary, are huge proponents of post-secondary education and support several scholarships in horticulture. The next generation Mark met Mary when he was 22 and she was 21. Mary was attending the University of Guelph and was working as a cashier at Weall and Cullen, where Mark was the general manager at the time. They will have been married 37 years this year.

The couple has four children: three daughters — Lynn, Heather and Emma — and one son, Ben — a writer with a background in agriculture and business, who recently started working with Mark. “It’s not a coincidence that I ended up here,” says Ben. “I was influenced by the environment I grew up in. We grew up on the nursery farm, which was in Brooklin outside Whitby and in the stores.”

Ben calls himself and his sister Heather, who is a landscape artist, the third generation of horticulturalists in the family. He remembers spending most Saturday mornings accompanying Mark to Yonge and St. Clair where Mark would broadcast his syndicated radio show. “That’s the beauty of him being self-employed,” says Ben. “We were always along for the ride because he was working all the time. We saw every facet of that.”

Ben is now joining Mark in growing the Mark Cullen brand, which takes an independent retail ethos and applies it to the Garden Centre, and in developing Mark’s relationship with Home Hardware. He studied agriculture at the University of Guelph and business at the University of Dalhousie and worked at the head office of Smucker Foods of Canada in trade marketing. Looking to get back to the world of agriculture, Ben told his dad he was considering leaving his job to possibly start his own business. 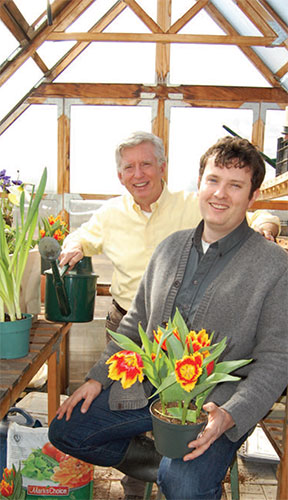 “He said to me, ‘Basically you told me you wanted to do what I’m doing,” recalls Ben. Before he joins Mark full-time, he’s studying and gaining hands-on plant knowledge by working in a Home Hardware Garden Centre. Mark recognizes that the world is changing dramatically. So, while he describes himself as a traditional media guy, he is looking to embrace the electronic, as well as, the traditional media.

Working with Ben has given Mark access to an audience he doesn’t think he would have been able to access naturally. “The first job I gave him was social media,” said Mark. “He’s already changed the way I connect with my audience electronically through Facebook, Twitter, and now Pinterest.” Raising the visibility of horticulture Mark’s accomplishments are quite impressive: 22 books, four television shows, and 30+ years of radio experience and a weekly column that is featured in 35 papers that reaches one and one-half million people each week. He has been called “Canada’s gardening guru,” though he bristles at the moniker, noting that there are people who have forgotten more about a particular topic of interest than he’ll know in his lifetime.

“There are some extremely intelligent, well-informed, inspired, creative people, who are equally qualified for the moniker,” he says. “Someone stuck it on me. But you won’t find Mark Cullen calling himself the gardening guru.” Mark was appointed a Member of the Order of Canada in 2016, an experience he describes as transformative. “I’ll never forget the phone call, the public announcement,” he said. “I’ll remember forever the day I spent in Ottawa at Rideau Hall.”

The enthusiasm wi thin the industry has been overwhelming: people who he’s never met came out of the woodwork to say congratulations, says Mark. The recognition was special for everyone in the industry, says Ben: “He represents thousands of people in the horticulture profession who are working ever y single day to plant trees and green-up landscapes, be it in backyards or community gardens… It felt like a major win for everyone.”

A look toward legacy Every product that Mark develops and every story that he tells, starts in his home garden. Situated on Cullen’s home, north of Toronto, it features acres of vegetables, a huge ornamental garden, native gardens and meadowlands. This personal connection feeds the trust that he has built with Canadians, which he values deeply. “I have always been very careful to protect that trust and to be honest with people and to not misrepresent myself,” says Mark.

“That’s been extremely important and helpful in moving my career forward.” He credits his father for teaching him the important values of having integrity and building trust with customers and hopes that his own children continue to learn these values. Speaking of the next generation, Mark believes that it’s important to bring children outside into the world of gardening, especially as school curriculums cut back on outdoor activities.

In a chapter in his current book, The New Canadian Garden, Mark discusses the need to introduce children to Mother Nature. “It’s essential that we introduce children into the wonders of soil and the wonders of growth through their own nurturing,” he says. “You learn by growing… It’s important to get family and young people engaged in the gardening process. I don’t know anything that’s more important.”

“Ten years ago, there were 11. That’s a reflection of our general desire for good quality food, to know where it came from, to know that’s it’s safe — food security — and as Michael Pollan says, ‘You want to shake the hand of the farmer who grew your food.’” 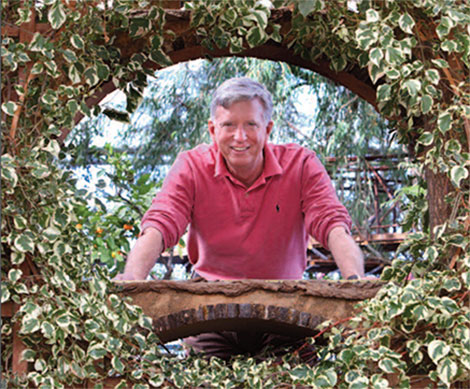 It’s this focus on food that Ben sees as an entrée to attracting a younger generation’s interest in horticulture. “I think the goal is to bring more young people into gardening and reach them in a way that resonates — and the way that resonates is through food,” says Ben, who himself came to gardening through his interest in food. “That is the trend with gardening. Younger people are discovering it through their desire to take control of the things that they eat and bring that home.”

As for his legacy, Mark still sees many more productive years in his future. “I don’t think I’ve thought that far down along the road,” he says. “I’m always looking for the next opportunity.”

To Ben, Mark’s calling as a gardener means that he looks at legacy differently than people coming from other industries. “In gardening, you never really create something that’s just static and then leave it there. You set things up and you are part of a system and Mother Nature takes over. So, you can sort of try and guide that, but really it will continue to grow and it will evolve and you set it up and hope for the best.”

Ben points to Mark’s involvement with the Highway of Heroes project, of which Mark was founding chair, as an example of how Mark is more focused on spreading knowledge and awareness of horticulture rather than cementing his legacy. Highway of Heroes aims to plant a tree along the Highway of Heroes for every fallen soldier since Canada’s Confederation. That’s 117,000 trees. “It’s not really about him, which is so characteristic of Dad,” says Ben.

“His philosophy is if he’s inspired people to go out and plant gardens, that they’ll continue to grow. They’ll grow and they’ll become their own thing.” Even when discussing the Order of Canada, Mark jibs, “My impression is that this award is not for Mark Cullen alone, it’s for what it represents, which is the promotion of horticulture across the country to every Canadian.”