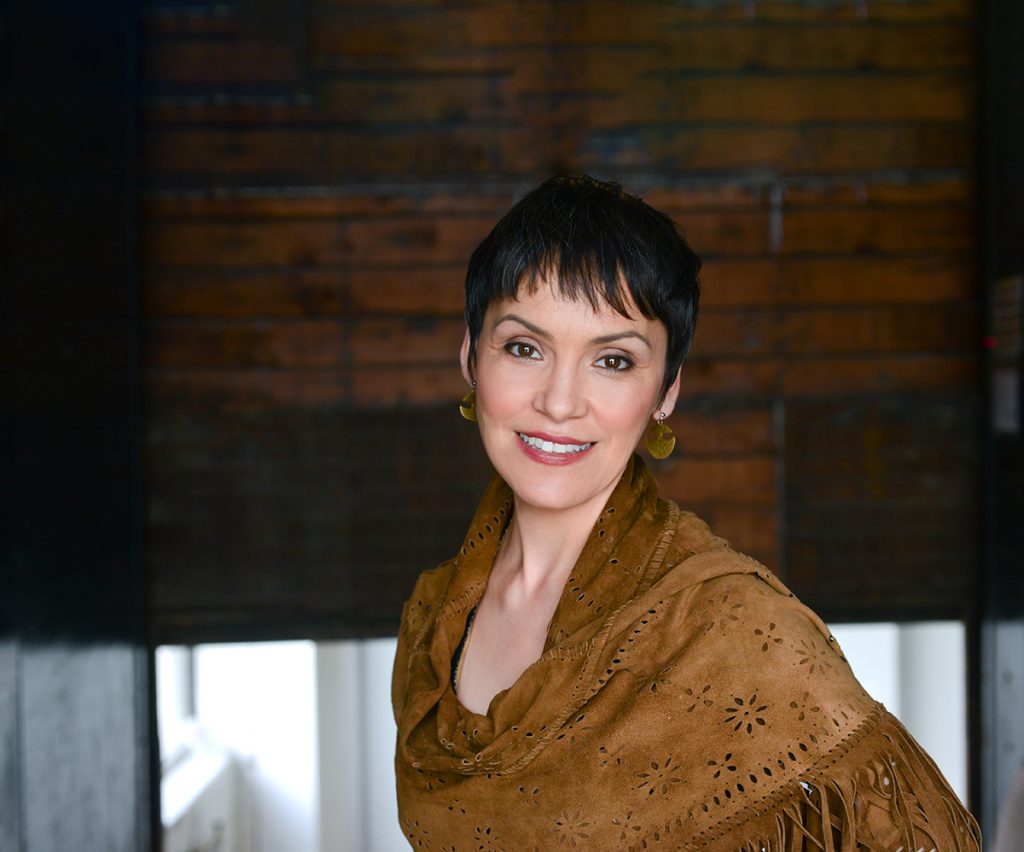 “Feel the fear and do it anyway. ” Those were the final words to the 2017 University of Toronto graduating class by their honorary doctorate recipient: Dr. Susan Aglukark. She ought to know — she has been doing it her whole life.

The first Inuit artist to win a JUNO Award (she has three of them, in fact), the recipient of multiple Much Music Video Awards, the Canadian Country Music Association Vista Rising Star Award, the National Aboriginal Achievement Award in the Arts and Entertainment category, and Governor General’s Performing Arts Award for lifetime artistic, it is hard to believe this impressive list of accolades belongs to someone who calls herself the “accidental artist.” She also holds four honorary doctorates and is an Officer in the Order of Canada.

With nine albums under her belt, she is obviously a gifted singer and songwriter. That talent is what propelled her to her initial fame, and anyone who follows the charts will know her number
one 1995 song O Siem (meaning joyful greeting), which was also the first top 10 hit by an Inuit performer. She has performed for Queen Elizabeth (twice), Prime Ministers Chrétien and Mulroney, and Nelson Mandela.

While musical powerhouse comes to mind, in truth, she is soft-spoken, insightful, and remarkably humble. However, as she begins to share her stories, it becomes clear that behind the modesty is a remarkable resilience and strength.

Born to two pastors, she grew up in Arviat, Nunavut. In 1991, after a difficult period, she made the monumental, brave decision to pack up and move to Ottawa to work as a linguist with the
Department of Indian and Northern Affairs Canada. “I was very happy at home, you know. All the things that happened to me aside, and the court case that followed [she was sexually abused as a child by a neighbour] — and we got the conviction — all of that aside, I was building a life at home with my sisters, my brothers, my mother, my father. The hardest thing in moving to Ottawa was leaving, but it was the best thing I could have done, but it was the hardest thing as well, starting from scratch.” 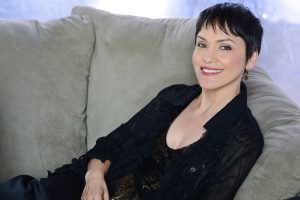 While in Ottawa, she got a call from a CBC producer who asked her if she could sing. She went for it, even though she felt the fear. It turned into analbum, and then after that, her next album Arctic Rose started to blossom. (There is the most beautiful, haunting version of Amazing Grace on the album, which she sings in Inuktitut. Her voice is mesmerizing.)

At the time, she was starting the process to get her pilot’s licence, in addition to working full time for Inuit Tapirisat of Canada, but she only had enough money to finish her album or get the licence. She chose the album. Good choice. “Arctic Rose came out in 1992 and was a bucket list project, but I wasn’t prepared for the response. There are the themes of the loss of friends to suicide,
alcoholism, sex abuse, and it really hit home for many people.” And from there, her career took off.

Aglukark’s identity as an artist is deeply rooted in her Inuit heritage and growing up in the North. She has steadfastly championed the Inuit, has been a key voice in telling their rich history to so many of us who didn’t know it before, and she has been an immensely effective social justice advocate for victims of poverty and abuse, but also for Indigenous education both for Indigenous and
non-Indigenous peoples.

“It isn’t taught in school, so we might as well do it.”

There is a great play called Kiinalik: These Sharp Tools, which explores the large cultural divide between the different populations in a friendship between a white woman and an Inuit woman. In one particularly poignant scene, the two women talk about white explorers in the North. The white woman talks about how they perished because they couldn’t find food. The Inuit character explains how they perished because they couldn’t see the abundance of food in front of them. 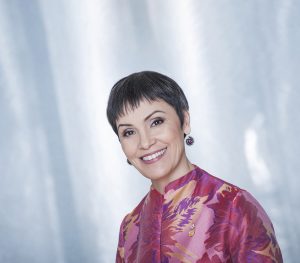 It has, at times, made the separation of Aglukark as an individual artist from the responsibility she feels as an Inuit artist towards her people difficult to reconcile, but she has given back so much.

She was a co-founding board member of the Aboriginal Literacy Initiative and founder of the Arctic Rose Foundation, which provides arts programming to Northern Inuit, First Nations and Métis children, youth and their families, as well as mentorship programs for high school kids, food security for families, and other cultural expressions in a safe environment.

Between 2008 and 2011, she was a scholar in residence at the University of Alberta, where she mentored Indigenous artists and focused her work on ways to address dropout issues that plague Indigenous students at all levels.

A published author, she says the best compliment she ever received was about her children’s book, Una Huna. What is this? The book explores how a little Inuit girl adjusts to “new” things, adapting from traditional lifestyle to settlement. “While it is a story about maintaining deep connections to who she is while learning new things, her story and that era bookends where we
are as Inuit. We are now correcting the narrative that the government gave us. My truth is my ancestors.”

After a book reading in Toronto, a non-Indigenous woman told her that what Aglukark was doing was brilliant and thanked her. “It is one thing to hear it from fellow Indigenous people, but to hear this from someone who isn’t part of our community was a huge compliment to me.”

More and more, Aglukark feels freer to explore her personal artistic side.

“This time we are living is a great one. As a Canadian, I was so happy that the Truth and Reconciliation Commission and the Inquiry happened when they did (although I wish it had been earlier).
As an Indigenous artist, it was such a relief. What it felt like was some of the weight and responsibility we have as Indigenous artists to use our platforms to shed light on these challenges was now being equally shared with another organization. I am very proud of that. And now, because we are sharing the energies, all of it, it is allowing those of us who just, some days, want to just be artists can just be artists, and I can do that now.” 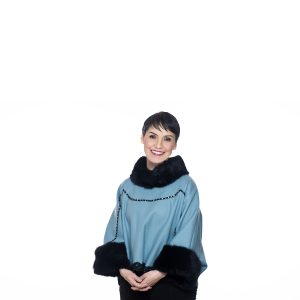 Freedom from fear
Feeling that way also comes from the freedom of recovery she feels from dark elements of her personal past.

A book that helped her through it was The Gift of Fear. “It allowed me to begin to acknowledge what was holding me back — truly holding me back. I began to understand the fear that was in my body and in my heart and how it’s not a bad thing. I’m not weak for having it, and I had to learn to harness it so that book will always have that special place for me.”

For a number of years, she kept a blog. It is a captivating read and offers insight into her journey and the challenges and successes she has faced along the way. It is deeply personal and very moving, and humbling to read. As she works through her own issues, she provides counsel to others.

“During the writing of the blog, I hit a place personally and creatively where I finally landed in a good place. I had just started painting and was waiting for my course to start. I remember the moment so well. I was listening to a CD, and the song playing was This Must Be the Place, and literally in a split second, that’s really all it took — I had released a good chunk of my demons. I understood, ‘You did it! This is it.’ In that moment, I exhaled.”

And that felt good. “Since then, the work has been about expression from a really good place. While back then, I shared verses to heal — I’m still doing that — now I’m doing it from a new place. I’ve got this. That was a very clear moment in my life, the most clear I had ever been, next of course to getting married and having my son. For me personally, it was like — I’m good, I’m really good. Knock me over. I dare you.”

In feeling safe and stronger, she has given others the space to heal and be free too.

“I feel much more empowered. I feel stronger as an artist and as a person. That has a lot to do with the people in my circle, my co-collaborator, Chad. He gets me. He has always created a safe space for me.” With each project, she says she feels stronger and stronger, but for someone looking in, in truth, her modesty seems completely unwarranted and humbling all at the same time. For someone of her success, arrogance would not be out of place. She is the furthest thing from that. On top of that, she has a warm, kind, calming presence.

“I have also come to a place where I don’t need permission to express. That was me in the early years, always looking for someone to approve. I had a lot of learning, a lot of things that were scary. I had to learn myself — who am I on stage? I just had to figure it out. I know now, I don’t have to be a dancing person on stage. I don’t have to pretend. I have a story to tell, and this is who I am.”

As with all of us, aging has helped provide perspective.

As a true artist, she reads and paints in her spare time. “Art, all of it. I love it. Creating art, performing, writing music, I can’t live without my art studio.” She is also an extremely private person. She also loves being alone. “I work really, really hard to protect my alone time — just ask my husband and son.”

It was surprising to find out she loves thrillers and horror movies. “I don’t know what it is, but I am drawn to them, and I have movies on in the background as white noise when I create.” Here
she is writing deep, beautiful, rich music with Freddy Krueger on in the background.

Aglukark is a positive force in the world. Her ultimate message is one of hope as she shares the history of her people. While she addresses social problems and other health problems in Indigenous
communities and their links to rapid change, her positive themes are about self-esteem and empowerment. Confronting and overcoming insecurities are issues that resonate with everyone of every
age. Overcoming fear. It has been a theme throughout her life, and she has done it. “I got this, and it feels good to be here.”