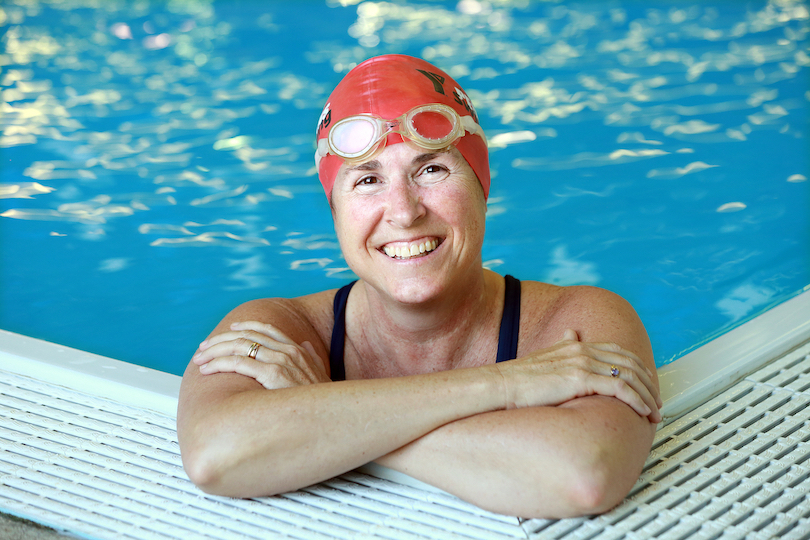 In the lobby at the YMCA of Kingston, Vicki Keith is instantly recognizable. Her bright, mischievous eyes and wide smile have been seen in news clips and front-page photos across the continent, although usually with swim goggles and a bathing cap in view.

This is the legendary marathon swimmer, who, in 1988, was the first person to swim across all five Great Lakes: Lake Superior, Lake Michigan, Lake Huron, Lake Erie and Lake Ontario, in an unheard-of 61 days. She’s also the only person to complete the 104-kilometre double crossing of Lake Ontario.

Three decades ago, North Americans were transfixed as she defied odds and overcame obstacles en route to setting a slew of world records and becoming one of the greatest marathon swimmers ever. What will really blow you out of the water, though, is what she has accomplished beyond those epic feats of athleticism.

Vicki has not only raised over a million dollars for kids with disabilities, as a coach and public speaker she continues to inspire people to exceed expectations, triumph over limitations and redefine what’s possible. For instance, in September Abi Tripp, an 18-year-old swimmer with cerebral palsy, will be competing at the World Para Swimming Championships in London, England, as a member of Team Canada. Vicki is her coach.

Abi was six years old and a non-swimmer when she joined the Penguins Aquatic Club, founded by Vicki Keith at the Kingston Y. The little girl cried that first time in the pool; she was afraid of the water.

Fast-forward to 2016, and an Instagram picture of Abi beaming. The Canadian Paralympic Swimming Team had just been named and the 15-year-old was on it, able to represent the country in Rio de Janeiro. When the time came for Abi to race in Rio, Vicki was in the stands cheering her on. The teen was shocked, nonetheless, to earn a spot in the finals in three different events, finishing sixth in the 400-metre freestyle. As she remarked in The Toronto Observer, “I didn’t think I would make the finals, but my coach believed I could.”

Once called the Lady of the Lakes, Abi’s coach is also the Queen of the can-do attitude. “If you show your belief in somebody, they can take that and use it until they believe in themselves,” explains the former marathon swimming great, as she chats in a room off the pool on Wright Crescent.

First though, Vicki Keith believed in herself, setting out in August of 1985 to earn a spot in the Guinness Book of World Records. With a crew of two and no idea of what she was getting herself into, she attempted — and succeeded — to swim three crossings of the Kingston waterfront for a total of 12-miles, doing what was to become her trademark: the butterfly stroke. It was the only one of her distance swims that wasn’t a fundraiser. Following that initial foray into world-record setting, she raised about $50,000 for Hospice Kingston via swimming, and then set her sights on raising funds for kids with disabilities. All told, she tallied about $800,000 for Variety Village, including over $600,000 towards construction of state-of-the-art pools at the Scarborough training and fitness centre for people with disabilities. She pitched in with know-how too. After retiring from marathon swimming in 1991, she worked at Variety Village as a competitive and marathon swimming coach.

Then in 2001 she and her husband, John Munro, headed to Kingston where she formed a partnership with the YMCA to develop the Kingston Y Penguins Aquatic Club. A swim team for children with physical disabilities and their able-bodied siblings, she launched it as a means to create opportunities for young people to discover their abilities.

With the Penguins’ focus on potential and possibilities, these kids could develop confidence, self-esteem, work ethic, friendships, physical and emotional strength, plus all sorts of life and leadership skills.

Vicki showed the way, diving back into fundraising action in 2005. At age 44 she came out of retirement to do a marathon swim for the Kingston Family YMCA. The plan was an 80-kilometre trek from Oswego, New York, to Kingston, doing her butterfly stroke; the goal was to raise$200,000 for a new pool. However, after almost 24 hours in the water, the swim had to be cancelled due to the weather. Did Vicki give up? No. While still in the lake she came up with Plan B, and two weeks later she was back in the water swimming the same distance, but this time along the shoreline. In the end not only did she set two more world records, she raised $260,000 for the Y.

Even outside the water, Vicki’s impact has been amazing. In competitive swimming, she has coached disabled athletes to the national and international levels. And in marathon swimming, she has coached them to achieve the unthinkable and set world records. Ashley Cowan, a quadruple amputee, was able to swim across Lake Erie at age 15. Carlos Costa, a double leg amputee, and Jenna Lambert, who has cerebral palsy, were both able to swim across Lake Ontario. They were inspired, no doubt, by their coach.

Time and again as a marathon swimmer, Vicki was told what she was setting out to do was undoable. She did it anyway. Pushing herself beyond recognized limits, she accomplished her goals and completed incredibly long, arduous swims despite three-metre swells, punishing winds, strong currents and cold temperatures. Hallucinations and nausea tested her mettle, as did pollution and wildlife: eels in Lake Ontario, jellyfish in the English Channel, and sharks in the Catalina Channel.

“A shark swam right under me,” she recalls of that famous route off the California coast. Her eyes light up as she explains how she didn’t panic or haul herself into the nearest boat. Right there in the water she posed a question to herself: “Is this a goal-stopping disaster or a minor irritation? ” The shark, a minor irritation, disappeared.

When conditions got, well, grisly — or potentially overwhelming, she’d draw on brain power, reciting a mantra, telling a joke, or focusing on one small step: the next stroke.

“We have no understanding of how powerful our brains are and we’re missing out by not fully tapping into that power,” she remarks.

In 1989, as she crossed the Strait of Juan de Fuca, the mental and physical challenge was the water temperature; it was menacingly cold. In her words, “Life expectancy was about an hour-and-a-half.” She was in there for 14 hours, doing the butterfly stroke, defying odds, and finishing what she started.

Then there was Sydney Harbour in Australia, where she dispensed with the shark cage and kept on going, completing her butterfly swim in 13.5 hours.

Despite those incredible triumphs, Vicki will tell you she was never a star athlete growing up. Was she stubborn, though? You bet. Victoria Grace Keith was born in 1961 in Winnipeg, Manitoba, to Carol and Brian Keith, and she grew up with three brothers, Campbell, Gordon and Donald. The family moved to Ottawa, then Pointe Claire, Quebec, and finally to Kingston, Ontario, when Vicki was a teen.

While she probably first dipped her toes in Lake Winnipeg, at age four, it was on the other side of the country that she got her proverbial water wings. “We joined the Y in Ottawa and that’s where I learned to swim. That’s also where I started to volunteer,” she says. “My mother was very big on us giving back. Both my parents were. My dad was always doing things for the community.” Among other things, he was a cub leader. “My mom started Hospice Kingston with two other nurses.”

Carol Keith also read books to young Vicki about female role models, Helen Keller and Florence Nightingale, who overcame adversity to do great things. She read these stories over and over until Vicki could read them to herself.

As for the volunteering, when Vicki was 10 and helping out at the Y in Ottawa, she made an important discovery. Assisting a boy with a physical disability to get into the pool, she was struck by how freeing and empowering the water was for him. It made a lasting impression.

Along with positive early experiences, negative ones also had an impact. Vicki says she was the kid who was picked last for sports teams, and she describes an occasion when she was shamed. After a ballet recital when she was in grade school, her ballet teacher was telling parents in the audience about the talents of their children. “Is Vicki’s mom here?” she asked. Mrs. Keith put up her hand. “Your daughter walks like a horse,” she was told. Vicki never went back.

She loved going to the YMCA, though, and she was determined to find a way to excel. Over the years she became a lifeguard, a swimming coach and a competitive swimmer, which eventually led her to marathon swimming. Speaking at TEDx Waterloo in 2011, she described how she came up with the idea. “I was sound asleep in bed and I woke with a start and I had two words running through my head: marathon swimming. And I instantly knew it was right. I got out of bed, I turned on my light, I pulled my Guinness Book of World Records off my bookshelf, turned past competitive swimming, and there were all these marathon swimming records.” Bingo: she would set a record of her own. The next morning, she went to school and told her friends that someday she was going to be a great marathon swimmer.

That’s as far as she got. Five years later, her idea was still treading water. “I had no clue how to start,” she says with a grin. “When I finally had a date, everything else fell into place.”

Taking that one step propelled her on the way to reaching “big hairy audacious goals.” It’s a life lesson she shares with others, using the analogy of doing the dishes. Growing up, she wasn’t fond of the after-dinner chore and would procrastinate because she was overwhelmed by the clutter left after a family meal. What you need to do, she discovered, is turn on the tap. “It’s turning on the tap for your goals and getting that one thing started.”

Back in the days when she was bent on setting Guinness world records, she also put maps on the wall pinpointing what she wanted to achieve, and she surrounded those maps with inspirational words. “I think it’s really important to have words to live by,” she notes. Hers are, dream, believe, laugh, achieve, inspire!

Stop isn’t part of the lexicon. Now 58, she laughs when asked about aging. “I don’t even think about age or worry about age.” She also pays no mind to the word impossible. As she shows and tells the young people she works with, “Anything can be achieved with hard work and dedication.”