Messing about in the kitchen and garden

Thirty-some years ago, the late Barbara Robertson and I collaborated on what we thought of as a 21stcentury version of the medieval Housewifery book. It was intended as a cheerful miscellany of cooking, gardening, and cellaring. There were suggestions and recipes interspersed with quotations from Canadian poets and early diarists, and travellers. We made lavender bags, forced bulbs, pestered friends for recipes, haunted the library’s rare books section, and fed unusual treats to our reluctant children. “What are those green things? Those are the juniper potatoes,” we replied. One of our mantras was to encourage people to make the best of their environment, just as their ancestors did. We emphasized using local and seasonal produce. But one can tire of a diet of turnips and squash in winter, so we also advised tucking away fruit and vegetables in the freezer. Strawberry shortcake can be very cheering in February. Now that ‘eat locally’ is gospel and people have come together more for meals during a pandemic, it seemed time to share a 21st-century sampling from the book, once again. 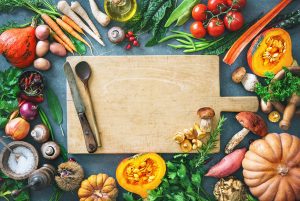 The true beginning of the gardening year, autumn, is scarcely the most restful of seasons, what with taking things (herbs and tender plants) out of the garden and putting in other things (bulbs and
perennials). But it is exhilarating.

First, there are the September visits to the market for baskets of peaches, plums, and ground cherries, if you are lucky. Later, when the market really hits its stride, there will be bittersweet, dried savoury and pumpkins, perhaps not so enormous as those John Geikie saw in the mid-nineteenth century (“I have known them so large that one would fill a wheelbarrow.”), but large enough.

We gather supplies, taking excursions to the country to pick apples or wade ankle-deep in the swamp water to gather cranberries for the freezer. Walks in the woods yield juniper berries (to be dried in the oven), and by the roadside, you may find milkweed pods and teasel for your own dried flower bouquets.

Thanksgiving, cottage-closing time for many, and Hallowe’en, with its jack lanterns and excited children, are upon us. And finally comes that eerily quiet November weekend, when one runs around the garden like a demented squirrel with frost-bitten paws, flinging in the last of the bulbs. “Why,” one asks oneself come the Spring, “were the crocuses planted in the sandbox?”

Then there is deep peace. The outside bulbs are nestled under their leaf covering, the cranberry cordial is steeping quietly down in the fruit cellar on the shelf above the pots of hyacinth and forced
daffodil bulbs growing roots (one hopes) in the cold darkness. The blueberry wine is bubbling in the dining room. It is time to settle back, put one’s feet up and admire the first snowflakes drifting past the window.

Tomatoes (from Sketches of Upper Canada (1821), by John Howison.)

The Spaniards brought back tomatoes with their gold from the New World (cherry-sized tomatoes grew wild in the lower Andes). According to the herbalist Gerard, they ate them prepared and boiled with pepper, salt and oyle (oil).” Until the middle of the nineteenth century most Englishmen, like Gerard, regarded “the golden apple” with contempt:” they yield very little nourishment to the body, and the same naught and corrupt. ” The tomato quickly became a staple of Italian cooking but was used in England chiefly as an ornamental garden plant or was hung in houses as a
decoration (one wonders for how long).

Today the tomato has come into its own. Home gardeners love the hearty beefsteak for its flavour; the cherry tomato is used for shish kabobs and garnishes, and the pointed Italian plum for tomato pasta and pasta sauces.

What to do with tomatoes

The best thing to do with a fresh tomato is to pick it sun-ripened from the vine. Slice it, salt lightly, sprinkle with chopped fresh basil and eat it immediately with slices of brown bread and butter. Equally good are marinated tomatoes. Cut the tomatoes in thick slices, arrange in circles on a plate and sprinkle with a little sugar. Chop green onions, green and all, finely and toss over the tomatoes. Pour over vinaigrette dressing. Just before serving, add chopped fresh parsley or oregano.

A simple, yet substantial lunch. Lightly toast sliced whole-wheat bread (homemade if possible). Butter the toast and cover it with finely sliced onions and tomatoes. Add alfalfa sprouts if you
have them, and top with slices of old Cheddar cheese. Broil for one or two minutes or until the cheese melts. Serves one. For Carnivore’s Banyon, add a slice of ham between the onion and tomato
layer.

Cucumbers are at their best when the local ones start yielding in August, and are at their most abundant in September. They flourish until the frost gets them all too soon. Within this short space
of time, they must be enjoyed and preserved, for the ones grown by you or commercial gardeners near you are incomparably better than those that have travelled great distances to reach you in the
winter months. (Talk about jet lag!) The cucumber is an ancient vegetable; seeds found near the Burma-Thailand border date back to 7750 B.C. Apicius (a collection of Roman cookery recipes)
provided cucumber recipes for the ancient Romans, but it does not seem to have reached England and France until the 14th century. In an interesting reversal, the Spaniards took the cucumber with them to the New World and introduced it to the Indians.

Cucumbers are like tomatoes in that one begins the season by enjoying them fresh and with very little adornment. And the season is so short that one need never travel far from simplicity. Adornment for cucumbers means pickling.

Combine all the ingredients except the cucumber in a small • serving bowl.
• Peel the cucumber if the skin is tough, and slice.
• Add the cucumber to the dressing and combine thoroughly.
• Cover and let sit for about 1 hour.

“They [the Canadians] cut cucumbers into slices and eat them with cream, which is a very good dish. Sometimes they put whole cucumbers on the table, and everybody that likes them takes one, peels and slices it, and dips the slices into salt, eating them like radishes.” —A quote from Peter Kalm, Travels into North America, (1753-61).

We like to think of Peter Kalm, the great Swedish naturalist revelling in this wholesome treat.

• Peel the cucumbers and slice them very thinly into a medium bowl. Sprinkle them with salt, cover with a weighted dish and drain after 2 hours. Add the onion.
• Mix the sour cream, vinegar, sugar, and pepper in a small bowl and pour over the cucumbers.
• Cover and chill for at least 1 hour. Sprinkle with chives.

Happiness is finding a cache of ground cherries at the market. This edible member of the nightshade family and cousin of the Chinese lantern is sometimes known as the strawberry or husk tomato. It is planted nowadays chiefly by squirrels, although it is increasingly listed in seed catalogues. Look for them by the wayside or in fallow land.

There’s no denying that it’s time-consuming to husk the papery shells, but the flavour of the tiny golden balls concealed within is subtle and unique, hinting perhaps at a cross between a cherry and a grape? A tomato and a melon? One begins to sound like a wine snob. Ground cherries freeze well but must be husked first. Green ones will ripen if left alone for a few days.

• Pastry for 9-inch (23 cm.) pie plus lattice top.
• Mix the ground cherries gently in a large bowl with the other filling ingredients until evenly coated. Fill the pie crust with the fruit and top with a lattice. Bake for 1 hour at 350F (180 C.)

If you rub the small, hard blue-black berries of this flat shrub that sprawls on poor rocky soil, they will exude a strong smell of gin (of which juniper oil is an essential component). Juniper berries look somewhat like giant peppercorns. English cooks highly regarded them for spicing meats and herbalists as a remedy for plague, pestilence, poison, and — less dramatically — chilblains and toothache. A forest pharmacy. They grow plentifully in our woods too. Since they are expensive to buy, it seems a pity not to harvest your own supply when you manage to find them at all. Crushed, they make a good seasoning for veal or roast lamb.

Dry the berries by placing them in a slow oven, about 300F (150C) until they have shrivelled. Store them in small airtight jars in your spice cupboard. They keep indefinitely. Add 3 or 4 crushed berries, marinades, or gravies. A dozen will make for a spirited dressing baked with your roast or chicken.

This is an unusual, flavoured butter for use with grilled fish or steak. Just spread it on before grilling.
Makes about ½ cup (125 ml.)

Cook the onion in the butter until soft. Add the garlic and remove it from the heat. Add the remaining ingredients. Chill and store in a small, covered jar in the refrigerator.

Mary Alice Downie is the author of 28 books for children and adults. This story is harvested from The Well-filled Cupboard: Everyday Pleasures of the Canadian Home and Garden co-author with Barbara Robertson. (Lester & Orpen Dennys, 1987, reprinted by Fitzhenry & Whiteside, 2000 pb).