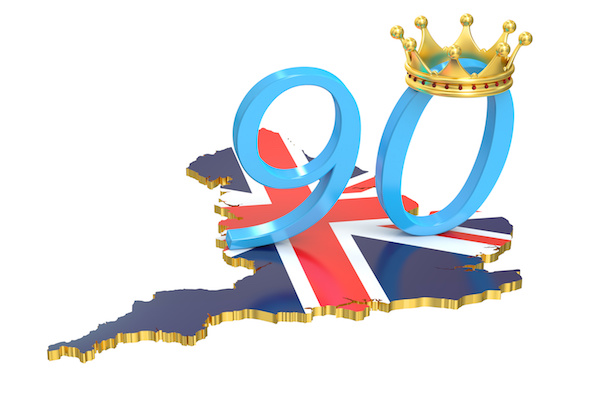 Are you a travel lover? A fan of Queen Elizabeth? It’s a splendid time to visit Britain!

In celebration of the 90th birthday of Queen Elizabeth II, three special exhibitions of Fashioning a Reign: 90 Years of Style from The Queen’s Wardrobe will be staged across each of Her Majesty’s official residences during 2016.The exhibition — notably the largest display of the Queen’s attire ever mounted – began in Edinburgh in April and will continue with the State Rooms of Buckingham Palace in August, followed by Windsor Castle in September 2016. In addition to showcasing British couture and history, the exhibitions feature jewellery,accessories, ceremonial and military attire, and more than 150 outfits selected from significant events in the Queen’s life, such as weddings and christenings.

The first of the three special exhibitions, Fashioning a Reign: 90 Years of Style from The Queen’s Wardrobe, opened April 21 at the Palace of Holyroodhouse on the 90th birthday of Her Majesty The Queen.

The group of outfits, which chart Her Majesty’s life and reign from childhood to the present day, and represent family, official and ceremonial occasions, is the largest display of The Queen’s dress ever shown in Scotland.

For public appearances during childhood, Princess Elizabeth and her sister Princess Margaret often wore formal dress, such as the pink, princess-line coats and matching bonnets in the exhibition.  These outfits were worn by the Princesses, aged nine and five respectively, for a Service of Thanksgiving for the Silver Jubilee of their grandparents, King George V and Queen Mary, at St Paul’s Cathedral on 6 May 1935. Princess Elizabeth also wore the coat for an official visit to the Palace of Holyroodhouse with their parents King George VI and Queen Elizabeth in 1937.

The British couturier Norman Hartnell, who was knighted for his services to the Royal Household in 1997, first began designing for the then Princess Elizabeth in the 1940s.  For a State Banquet at the Royal Palace of Bangkok, during Her Majesty’s State Visit to Thailand in February 1972, he created a silk-cotton evening gown for The Queen, encrusted with crystals, sequins, beads and diamantes.  The panels of rich golden fabric in the skirt and the coordinating jewelled embroidery are in the colours of the highest order of chivalry in Thailand, the Most Illustrious Order of the Royal House of Chakri.

The Most Ancient and Most Noble Order of the Thistle is second only in precedence to the Order of the Garter and represents the highest honour in Scotland.  As Sovereign Head of the Order, Her Majesty wears the mantle, hat and insignia of the Order on ceremonial occasions, such as the installation of a Knight of the Order at the Thistle Chapel at St Giles’ Cathedral in Edinburgh.  The mantle, on display for the first time, is of dark-green velvet, lined with white, and is embroidered with a representation of the Star of the Order.  The hat of black velvet has a plume of white ostrich feathers and an embroidered badge of a thistle, surrounded by the motto of the Order ‘Nemo me impune lacessit’ (No one harms me with impunity).

The exhibition at the Palace of Holyroodhouse will be followed by exhibitions at the Summer Opening of the State Rooms at Buckingham Palace from 23 July 2016 and at Windsor Castle from 17 September 2016.  In total, around 150 outfits worn by The Queen will be presented across the three Palaces, many chosen because of their close association with the location.

The three separate exhibitions Fashioning a Reign: 90 Years of Style from The Queen’s Wardrobe are at:

Each exhibition is part of a visit to the Palace and included in the general admission ticket. Tickets and visitor information: www.royalcollection.org.uk, T. +44 (0)303 123 7300.

A special ticket, ‘The Queen’s Palaces’, which gives admission to the Palace of Holyroodhouse, the Summer Opening of Buckingham Palace and Windsor Castle, is available to purchase until October 2016 priced at £48.00 for an adult ticket.