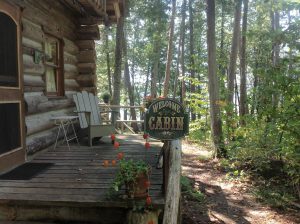 The places and spaces along the Bonnechere River — the lakes in its path are filled with exciting memories of the lumber barons and much remains of the early days of settlement. The delight of this countryside is the joy of discovery; and so many interesting and scenic places lie waiting for the visitor to happen upon them.

It would be impossible to list all of the businesses and attractions in this area, so this article is meant to highlight only a few. With so many restrictions on travel, take the time to wander along some truly remarkable country roads and meet some very interesting country folk.

Although you will be welcome at any time, the first weekend in October provides a wonderful opportunity to also enjoy the incredible autumn colours by visiting the artists and artisans throughout the community on the Annual Madawaska Valley Studio Tour (madawaskastudiotour.com). The Eganville Tourist Information Centre (613 628-3101, ext. 1594) is a quaint, little log building that greets you as you enter Eganville. Stop there and get introduced to an exciting adventure!

Eganville, the jewel of the Bonnechere 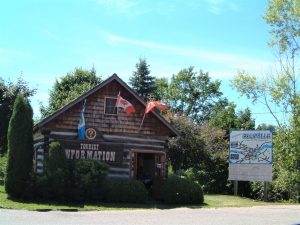 Gregoire Bélanger was the first settler in the small valley on the Bonnechere River in 1825. He left the following year and sold his land and shanty to James Wentworth, who opened a lumbering depot known as The Farm. John Egan, who became one of the Ottawa Valley’s wealthiest lumber barons, arrived in 1830 and developed the townsite, which was known then as Donegal. Egan bought The Farm in 1837 and built a lumber depot, timber chutes, a local lumber supply store, a stone grist mill and helped to develop local sawmills on the Bonnechere River. The settlement was very prosperous and had businesses of every kind. The name was changed to Eganville in 1852 with the opening of the post office. In 1911, three boys with cigarettes started a fire which almost completely destroyed the north side of the settlement. Originally built as a post office in 1912,the Bonnechere Museum (613 628-1000 or 613 628-3240), Highways 41 and 60, preserves the history of the settlers and the development of the area, and presents an overview of the Bonnechere River watershed and environs, its landscape and exploration. Eganville has a number of parks including the 13-acre Centennial Park with its bandshell, children’s playground, and natural amphitheatre, and McRae Park where lookouts present a spectacular view of the incredible might and beauty of the Fifth Chute of the Bonnechere River.

Although it was known in 1853 that there were subterranean channels along the Bonnechere River, it was not until 1955 that the water was removed so that they could be explored. Lying under a hill of limestone, the Bonnechere Caves (613 628-CAVE) are a maze of twisting passages through rock with stalactites and fossils of coral and sea creatures. Guides give participants a crash course in geology, before taking groups through the passageways from May to Thanksgiving. 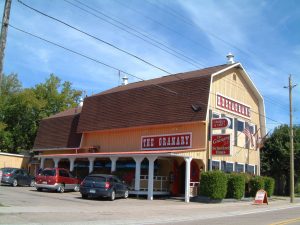 The Pine Tree Motel (613 628-2832), Highways 41 and 60, has fridges and microwaves, a large quiet picnic area and a playground area. Ideal for a romantic getaway or a family vacation, Stuart Log Cottage (613 628-3311), 71 Holiday Lane, is an authentic log cabin in a private wooded setting on the shores of Mink Lake, with a kitchen/dining area, four-piece bath, and wood-burning fireplace. Fifth Chute Inn (613 223-9436), 291 Bridge Street, is located in a heritage brick building overlooking the Bonnechere River and above Fifth Chute Coffee.

The Annual Bonnechere Authors Festival (613 628-2400) takes place in several venues in July where authors read their writings. The Annual Gun Show (613 628-3296) is scheduled for mid-August at the Eganville Community Arena. 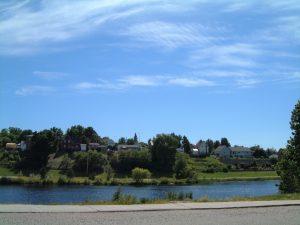 In the early 1800s, John McLean, one of the Hudson’s Bay Company’s best traders, raced on snowshoes up the Bonnechere River to beat the independent traders in making contact with the
Algonquin Indians and to claim the settlement. Charles Thomas established the outpost for the Company in 1827. The community was named Golden Lake in 1873, when the post office was
designated to honour an early settler, John Golden. A hamlet that has changed little since then, it is quiet in winter but comes alive in summer, when cottagers and tourists flock to the beaches and
invade the gift stores, restaurants and accommodations.

Highway 60 offers a mix of eateries, stores and accommodations. Golden Lake Variety (613 625- 2654), 11199 Highway 60, is a convenience store. Golden Lake Chinese Restaurant (613 625- 2366),13278 Highway 60,serves traditional Chinese and Asian food. Rhythm of Your Soul (613 625- 1888),13300 Highway 60,showcases fashion, home decor, antiques, collectibles, building materials and much more, and offers Kawartha Dairy ice cream and delicious frozen yogurt at the dairy bar. Golden Sands Vacationland (613 625-2525), 13163 Highway 60,is a four-season resort with a motel and cottages on 400 feet of beautiful sandy beach on Golden Lake, a restaurant and licenced dining room, a gift shop, mini-putt and driving range. The Mountainview Cottage Resort (613 625-2971), 13613 Highway 60, offers cottages on one of Golden Lake’s beautiful sandy beaches. Greystone on Golden Lake (613 625-2999), 144 McNee Drive, was first established in 1940 by Archie Eady who, it is reported, was a personal guide for some of the Group of Seven artists on their Algonquin Park adventures. It now boasts a 6,000-foot custom stone house overlooking Golden Lake with magnificent luxury suites and an 850-foot sandy beach lakefront, as well as a number of luxury, themed cottages. 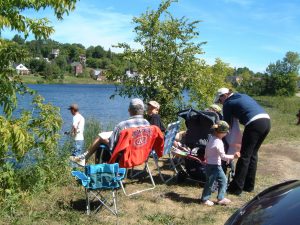 Around the corner from Highway 60 at 3 Kokomis Road, The Cottage Cup (613 625-2992) offers exotic teas, Fair Trade and flavoured coffees, tea accessories, gift baskets, clothing, lakeware, gifts
and more. Attached to The Cottage Cup is the Boat House, a gourmet chip truck. Further down Kokomis Road is the Native community of Pikwàkanagàn, which means “valley covered in evergreens,” where Native culture is highlighted and promoted. The Kokomish Restaurant and Craft Store (613 625-1196), 153 Kokomis Road, serves Canadian food and sells clothing, exquisite Native crafts, including purses and moccasins. A number of cannabis and smoke shops are on the reservation. The Algonquin Way Culture Centre (613 625-1958), 1674 Mishomis Inamo, hosts
cultural events to “revitalize, reintegrate, enhance and protect the cultural traditions, customs, practices, heritage, language and arts of the Algonquins of Pikwakangan First Nation.” In most
years, visitors are welcome to visit the community during the Traditional Pow Wow on the third weekend in August, and are encouraged to participate in the annual celebration of Mother Earth and the Aboriginal culture of drumming, dancing, crafts and traditional foods. However, because of the coronavirus, the 2020 PowWow has been cancelled.