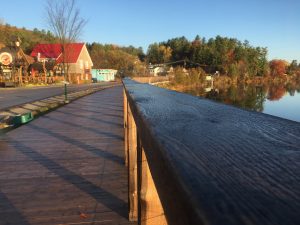 While businesses patiently wait for the economy to fully re-open, we can take the time to research towns and villages in our backyard for the perfect antidote to the last few months of important and essential self isolation.

The magnificent Gatineau Hills, which begin just north of the Ottawa River at the edge of the Great Canadian Shield in Gatineau Park, are a
national treasure of 361 square kilometres of trees, lakes and lookouts. The beauty of the hills and surrounding farmland continues north up the Gatineau River, and at the confluence with the La Pêche River, arrives at the exquisite Village of Wakefield, long a tourist destination since thecoming of the railroad in 1891.

In response to the need for pine lumber for the settlement of Wrightville (now Gatineau),the lumber barons worked their way up along the Gatineau and La Pêche Rivers. Joseph Irwin and Mary Pritchard, immigrated from Ireland in 1829, followed by ten other families.Subsequently,immigrants from England, Scotland, Ireland and France followed to settle the Township of Wakefield, named for the City of Wakefield inYorkshire,England.It is difficult to know when the name “Wakefield” began to be used, since the early name seemed to be La Pêche, possibly because of the vast stocks of fish in the rivers.At that time, Wakefield Bay at the mouth of the La Pêche River, as it flows into the Gatineau River, began to attract settlement. The community became established in 1838 when William Fairbairn petitioned to build a stone grist mill in the centre of the village,which was expanded to a sawmill, a woollen mill and a general store by the Maclaren family.

Former Prime Minister Lester B. Pearson and three colleagues chanced upon the small Maclaren family graveyard.All three decided to
be buried there and bought plots for $10. After his death in 1972, improvements had to be made to the road leading to the graveyard to
accommodate the funeral cortège. Today, the graveyard looks down toward the river and the Wakefield Mill Inn and Spa (888 567-1838),
60 Mill Road. French and Quebeçois cuisine are the specialties of the Muse Restaurant and the Heron Wine Bar, which retain the original
stone walls of the old Wakefield Mill and overlook MacLaren Falls.

The Fairbairn House Heritage Centre (819 778-3382), 45 Wakefield Heights Road, the home built by William Fairbairn in 1864, is
a museum housing memorabilia from that era and also hosts a tourist centre open seasonally from May to October with full hours in the
summer. 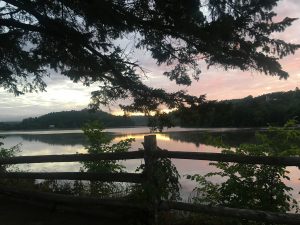 Looking north on the Gatineau River, one can see the red covered bridge.The original bridge was built in 1915 to connect the two shores
of the Gatineau River. It was burned by vandals in 1984 but rebuilt by the community.The Black Sheep Inn (819 459-3228), 753 Riverside,is
an icon throughout the Ottawa Valley,the Outaouais and across Canada. The Inn hosts nationally and internationally, known artists and groups and has been the stage on which the careers of many entertainers have gained momentum. In the centre of the village,the land rises sharply,creating the setting for the Vorlage Ski and Recreation Centre (819 459-2301), 65 Burnside Road,with 18 lifts. A lounge and cafeteria offer warm and filling food and a boutique stocks a variety of articles.

Expédition Wakefield (613 459-2225), 721 Riverside Drive, is the local outdoor adventure shop that sells and rents bikes and other outdoor
equipment for visitors to enjoy the local trails and waterways

It is a pleasure to explore the many exciting stores and boutiques that cover the Wakefield streets. An eclectic collection of native crafts, music, medicinal plants, clothing and more from the Métis, Inuit and First Nations are on sale at Khewa Native Boutique (819 459-2112), 737 Riverside,which was created to promote and preserve the culture of native peoples.Jamboree (819 459-2537), 740 Riverside,located in a 100-year-old building, stocks select personal gifts and gifts for home and garden. Everything you might imagine or want, from fresh produce to gifts, is featured at the Wakefield General Store and Chamberlin’s Lookout (819 459-2808), 804 Riverside, with a boutique and bistro upstairs which serves breakfast and lunch.Located “where the steam train turns” is the End of the Line Boutique (819 459- 1339), 1 Manse Road, which specializes in clothing, housewares and jewellery. The Wakefield Bakery (819 459- 1528),813 Riverside, is an artisan bakery which has a rich history of producing tantalizing breads and treats. La Confiserie Wakefield (819 459-1177) 817 Riverside, sells its homemade
preserves, candies and fine foods from an historic home built in 1920s. At the north end of the village at 26 Chemin Sully, Gallerie McKenzie Marcotte (819 459-3164), the studio of potters David McKenzie and Maureen Marcotte, perches on a wooded hillside, surrounded by gardens and decorated with ceramic masks. Convenience store items and much more can be found at Depanneur BonneHeure (819 459-3434), 723
Riverside, and at Wakefield Express (819 459-2770), 883 Riverside. The photography boutique of Hélène Ann Fortin, Photographer (819 459-2161), 5 Burnside Road, showcases her photographs. La Fôret Aliments Naturals (819 459-3555) ,757 Riverside,i s a natural food store. Tempol (819 918-9346), 6 Valley Drive, offers handmade, fair-trade products from India, including women’s clothing, souvenirs and accessories. The Wakefield Farmers’ Market, 38 Valley Drive, is usually open (before COVID) Saturdays from mid May to mid-October. The artesian well on Valley Drive offers the coldest pure water for free.

Several types of restaurants grace the village. Built in 1880 by Robert Earle, a carriagemaker, La Maison Earle, 1 Valley Drive,the oldest house in Wakefield, houses Café Molo (819 360-8726), a terraced eating house on the river with a view of the covered bridge and known for its fantastic soups and sandwiches, and yummy desserts. Kaffé 1870 (819 459-3943), 715 Riverside, serves great food in the little cozy pub, along with good music. Inside The Black Sheep Inn, is Bistro Rutherford (819 459-2100), 753 Riverside, a roadhouse which serves sandwiches, burgers, salads, poutine, wings and some Mexican dishes. The Village House (819 459-1445), 759 Riverside,is a wonderful cozy restaurant with an outdoor patio overlooking the Gatineau River and which offers a creative fine-dining menu. The old Wakefield train station on the edge of the Gatineau River is home to the Café Pot-au-Feu (819 459-2080), 794 Riverside, a café and fine dining establishment. M.J.M.D. Luigi Pizza (819 720-0021), 12A Valley Drive, serves great pizza. Le Hibou (819 459-8883), 757 Riverside,serves a full menu and a weekend brunch. The Pipolinka Bakery (819 459- 3961), 757B Riverside, makes bread,soups,savoury dishes, and mouth-watering delicacies.Sur la Lune Ice Cream, 31A Valley Drive, has an eclectic menu and serves decadent perfections. Wakefield Ma Boule (819 720- 0101), 761 Riverside Drive, is a seasonal ice cream shop.

The weary traveller can also choose to stay at one of the area bed and breakfasts. La Grange 1898 (The 1898 Barn) (819 459-3939), 37 Rockhurst, is a huge,transformed barn,high on a hill overlooking Wakefield, with original beams and wood floors in its separate living quarters, welcoming lounge with fireplace, dining room, modern kitchen facilities, and a huge backyard. Enjoy a gourmet breakfast at
Mon Petit Chum (819 459- 1814), 29 Burnside, situated on the hill leading to SkiVorlage.Les Trois Érables Boutique Inn (1 877 337-
2253),801 Riverside,built in 1896,is the originalVictorian home and officeof Dr.Hans Stevenson and,subsequently, the Drs.Geggie.Guests are served a three-course gourmet breakfast.The Motel Alpengruss (819 459-2885), 831 Riverside,offers rooms in an alpine-style lodge.Belle de Nuit (Auberge Wakefield Inn) (819 720-0222),21 Burnside,has stylish suites with private hot tubs and in-room breakfast.

Events start off the year inWakefield with Dragonfest, a winter festival at the end of January with activities for kids of all ages. In February,
Wakefield Doc Fest begins and features some top documentary films every weekend for a month. In the middle of May is the Annual
Wakefield Covered Bridge Run with three road runs crossing the famous Covered Bridge and two events on trails in Gatineau Park.
The end of May brings the Wakefield Writers’ Festival, one of the most anticipated cultural and literary events in the region. July 1st is the Annual Canada Day Celebration.

The vision of Theatre Wakefield is to support the creative economy of La Pêche and its community members through theatre, film, storytelling, heritage animation,community fundraising, social activism, learning and training, and writing to produce original works and performances. Their primary home is Centre Wakefield La Pêche, but they perform in other venues as well.

This article cannot hope to reveal to visitors the incredible beauty of the hills and waterways that brought settlement to Wakefield. Its purpose is to encourage explorers to visit and discover for themselves. Since many of the businesses have seasonal hours, it is wise to call
ahead for specific information. The Historical Society of the Gatineau has worked long and hard to bring together the remnants of history of this area, and much of their gatherings are available in the Wakefield Library (819 459-3266), 30 Valley Drive. If you are visiting in the
summer, the Tourist Bureau at the Fairbairn House can provide information on the area. As we go to print on this issue,the economy had not completely opened.

Readers are advised to check the websites and call ahead before visiting the Wakefield area.