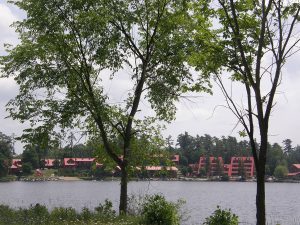 The mature pine and hardwood forests that stretched endlessly along the banks of the Madawaska River made this area, from about 1820,a prime logging area, with rafts of square timber floating downriver in the spring, despite the perilous falls and rapids. The constant roar of the river was quelled in the 1940s with the building of the Stewartville Hydroelectric Dam that caused the river to rise 40 feet and made it possible for the boaters and campers of today to enjoy water sports and boating.

Settlers from the colony founded by the infamous Laird McNab settled around the area in 1825 along treacherous rapids on the Madawaska known as the Long Rapids. It was originally named Johnston’s Rock after a Mr. Johnston was supposedly drowned near a large boulder and later renamed Madawaska Bridge after the bridge was constructed over the river. In 1834,the post office was called the McNabb Post Office; but, a committee of Scotsmen, in 1853, agreed that Burnstown should be named in honour of Robert Burns, the beloved Scottish poet. However, it was also rumoured that it was named after the “burn” (Gaelic for creek) that winds itself through the village behind the church and on to the river. The community had a tavern in 1840.A gristmill was built on the site by the Rochesters of Bytown about 1850, which made it possible for the settlers in the area to grind their grain locally rather than walking to Perth. 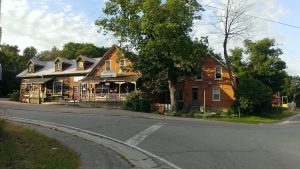 Although Burnstown is a small village, it is a community of artists and interesting shops, and the concentration of history and delightful places to visit makes it difficult to leave. A  few residential streets fan off the main road, but, for the most part, the heart of Burnstown is a pleasant walk up Burnstown Road and along Calabogie Road, with a magnificent view of the Madawaska River from the bridge. For many years, the Robertson General Store, which was built in the 1880s,served the community’s needs and was a place to gather. Today, the Black Bird Café (613 432-3599), a casual-dining restaurant, occupies the old store and serves meals and local delicacies. The log complex next door was James Douglas ’General Store until it was bought by the Robertsons and used as a dry goods storehouse. The middle part of the complex is home to artists Barbara Price-Brown and Laurie Anderson, who work and exhibit at The Artists’ Cove Gallery (613 752-1464), which also showcases the work of other local artists and artisans. For many years, this building was Tim Gordon’s General Store Publishing House which published books on Canadiana, local history and interesting stories of the Ottawa Valley, and more. Having moved to Renfrew in 2002, the reborn Burnstown Publishing House (613 509-1090) returned to Burnstown in 2015 on Leckie Lane. An historic “stopping place” to accommodate the lumbermen during the spring log drives on the Madawaska, the Leckie Hotel and Tavern, built around 1847, is now clay sculptor Richard Gill’s home, studio and workshop, the Fog Run Gallery. Richard’s wife, Cheryl Babineau, operates the Bittersweet Gallery (613 432-5254),which features an eclectic showing of the works of 50 local and other fine artists and artisans from across Canada. Once a one-room red brick schoolhouse, built in 1889,the Neat Coffee Shop (613 433-9960), 1715 Calabogie Road, offers food cooked fresh in a wood-fired oven with local ingredients, many of which are grown by the Shop. The Old Schoolhouse Stage offers live entertainment on a weekly basis. The local Summer Market is held on Friday afternoons from 2 p.m.to 6 p.m.in the parking lot next to Laurent’s Ice Cream and Café (613 432-3535), 1716 Calabogie Road, which serves ice cream, coffee and baked goods. 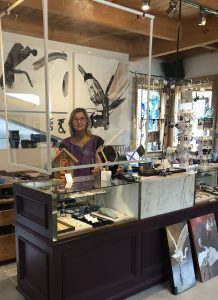 Originally the main settlement in the area until the Kingston to Pembroke railway displaced its importance to Calabogie, the origin of the
name is not known, possibly related to Springtown, Ireland. Between Burnstown and Calabogie, perched on the edge of the Madawaska River with a magnificent view, the Still Point House of Prayer (613 432-2791), 3031 Calabogie Road, was first established as an inn called the “Stopping Place” for lumbermen bringing their logs to market. It now provides inexpensive room and board, walking and hiking country roads, swimming and a quiet, contemplative place, operated by the Sisters of St. Joseph.

The timber boom of the early 1800s precipitated the damming of the Madawaska River to form Calabogie Lake. A settlement sprang up nestled on the shores of the lake and the Madawaska River. The name of the village is believed to be derived from the Irish “calladh bogaidh,”which is Gaelic for “marshy shore” or, possibly, from the Indian word for sturgeon, a fish that spawned in the Madawaska River. Calabogie was first called Madawaska; however, there was another Madawaska and so the name was changed to Calabogie. A sawmill was constructed in the 1880s by Carswell, Thistle and McKay; and, as demand for lumber increased on the local and international markets, the Kingston and Pembroke (affectionately called the Kick and Push) Railway was built. The K & P Railway lost its importance over the years as the lumber industry declined, and the rail bed is now a recreational trail. 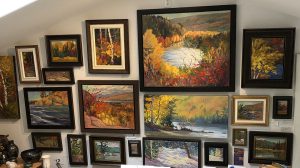 Surrounded by a multitude of lakes and garnished with forest growth, Calabogie is a popular vacation destination. Dickson Mountain is the highest peak in Eastern Ontario and Western Quebec and draws skiers from around the globe to Calabogie Peaks Resort (800 669- 4861), 30 Barrett Chute Road. The resort offers a beachfront with the Boathouse Bar and Grill, the 9-hole Ironwoods Golf Course and several ski-runs. The resort boasts a hotel, mountainside condos and is home to the fine-dining Canthooks Restaurant, as well as pubs and lounges. Further up the mountain is Eagle’s Nest Lookout, a popular site with a breathtaking view. Several hiking trails on the mountain provide exciting
views and interesting walks.

The bright red buildings of Calabogie Lodge (613 775-0544), 729 Mill Street, which fringe the shores of the lake, make a striking picture.
Guests have access to kayaks, paddle boats, the beach, an indoor saltwater pool and fitness centre, as well as snowshoeing in winter. The Tree House Art Studio (613 433-3274),located on the top floor of the main lodge, is a mother-daughter studio and gallery which also offers art
classes. 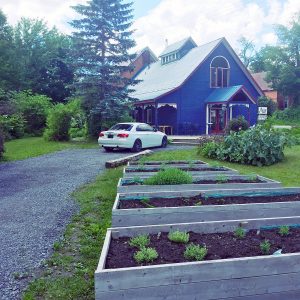 A number of restaurants offer succulent choices to the hungry. Oh-ElLa (facebook.com/ohellacafe/),636 Mill Street, serves breakfast and lunch, delicious eats and amazing coffees. The Redneck Bistro (613 752-1888), 12609 511 Lanark Road, has homemade, handcrafted menu items in a modern/rustic decor. The Calabogie Brewing Company (613 752-2739), 12612 Lanark Road, has a small taproom and patio overlooking the river. Charbonneau’s Grocery (613 752-2153), 699 Mill Street, serves the needs of the community. The ambiance of Calabogie attracts local artists such as Dwyene MacNabb (613 752-2438), 5377 Calabogie Road, who paints Canadian scenery in oils and watercolour.

Accommodation in Calabogie, in addition to the lodges, is cottages and cabins that fringe the lake. Jocko’s Beach Resort and Motel (613 752-2107), 5253 Calabogie Road, has beachfront cottages and large motel efficiency units with barbeques. Moran’s Cabins (613 883-0550), 5505 Calabogie Road, has housekeeping cottages. A number of guest houses are available during the tourist season, including Doublebogie Chalet (613 726-8999), 34 Legree Street; and Peaksview Chalets, 83A Viewmount Drive. Calabogie Motor Inn (613 752-2468), 5042 Calabogie Road, offers motel accommodation. The Lakehouse in Calabogie, 508 Blake Street, caters to groups of up to 13 people in a century-old mansion with tranquil lake views and rustic elegance.

Across Calabogie Lake is the community of Barryvale. Dominating the area is the 27-hole Calabogie Highlands Golf Resort (613 752-1234),
981 Barryvale Road. Surrounded by gardens, the lodge sits on 1,000 acres overlooking the lake, and was the summer home and mansion of Senator M.J.O’Brien, a lumber baron who was involved in building the K & P Railroad and an avid supporter of the National Hockey League. The Villa Resort Suites are situated on the golf course. The old railway bed, now the K & P Trail, disappears into the lush woods in front of the golf course as it winds its way south to Flower Station and beyond.

The Annual Raise the Roof Fundraiser Hockey Tournament takes place at the end of January. Bogie Days are a fun-filled weekend at the
end of May. Over 60 vendors sell their wares at the Calabogie Summer Market, 574 Mill Street, from  the beginning of June to the end of September on Saturdays from 9 a.m. to 1 p.m. The Canada Day Celebrations with awesome fireworks. The Santa Claus Parade heralds each Christmas season.

There are many places to visit in this region and this article does not attempt to include them all — but has left many exciting attractions for the visitor to discover. It is meant to give potential visitors a glimpse into the community. Many people you will meet will share the history and information about the attractions and events so that you can continue to explore. Due to the ongoing COVID restrictions, many businesses and events will not be operating in a normal fashion and it is wise to call ahead.