Kingston, Ontario is a city that knows and celebrates its history.  Whether that means taking a tour of Fort Henry or having a meal inside a hundred year old building, history is alive in Kingston.   On a recent trip to the limestone city,  our family had a chance to learn more about its heritage firsthand. 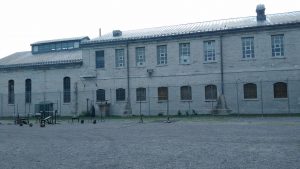 Our vacation started in a rather curious location,  the Kingston Pen.  We hadn’t robbed a bank or done any other crime.   We were here for a tour.

Built during the 1830’s, the Kingston Pen is perhaps the most famous prison in Canada.   It housed some of Canada’s most infamous criminals.   After being decommissioned,   the prison became open to the public via guided tours.

On the tour,  we learned about what life was like for both a prisoner and a guard.   We were able to explore many different areas including inside a jail cell.   There were even several former prison staff who shared their story.

Our tour guide kept it light with several comedic stories of failed escape attempts.  We left the tour thinking it is far better to avoid prison than trying to escape it.

After checking in to the  Holiday Inn Kingston Waterfront and having some supper, we decided to go on a Haunted Walk tour to learn more about Kingston’s creepy side.   Our group met in front of Kingston City Hall.  We were met by our tour guide who was wearing a black cape and carrying an old-fashioned lantern.  It definitely set the mood.

Our guide shared many spooky stories including one about a city park that used to be a burial site.  The park is now known appropriately as Skeleton Park.

As much as I loved the ghost tours,  I also really enjoyed walking around Kingston at night.   Our guide took us to various public buildings.   Several were, in my opinion,  architectural masterpieces.

While the stories were spooky,   all were appropriate for our thirteen year old son, David.  The tour lasted about seventy-five minutes.   It was the perfect combination of learning, being entertained and getting exercise. 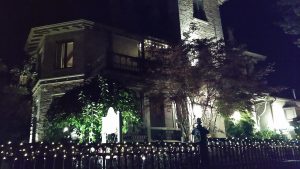 The night was still young so we enjoyed strolling around downtown Kingston.  The patios were full and people were having a good time.

The following morning, we set out to discover another side of Kingston.   Set on Lake Ontario,  Kingston offers up a myriad of water activities.  We chose to go kayaking and rented kayaks at Ahoy Rentals.    We hit the water and explored the shoreline of Lake Ontario.    David was a pro going ahead of us.   Sandy and I got the hang of it and enjoyed ourselves.   David was proud of the distance he traveled and would like to take it up as his summer sport.

About a two minute walk from Ahoy Rentals is the Pumphouse Steam Museum.   The pumphouse was built in the 1850’s as a response to health concerns and the need for water to fight fires.   Our guide shared the history of the pumphouse and how the equipment worked.   I did not envy the person who had the job of shoveling coal for hours on end to keep the furnaces running.

The museum also houses an impressive collection of model trains and tracks.   For me, the most meaningful was to see the set of the Friendly Giant.   This CBC children’s program was a mainstay of my tv watching when I was a kid.   Seeing the castle brought a wave of nostalgia.

We finished our time at the museum seeing a fascinating display about refugees.   It made one feel lucky to live in Canada and have a greater understanding of refugees who do come to Canada.

It should be noted that with the Pumphouse museum,  it is necessary to book tour times ahead due to Covid.

We ended our day by having a memorable meal at the Wharf and Feather restaurant at the Holiday Inn Waterfront.  There was a duo singing classic rock from groups like Fleetwood Mac and Led Zeppelin.   We were outside enjoying a beautiful view of the waterfront. David took the Atlantic Shellfish pasta while I enjoyed the Tuscan Salmon and Sandy enjoyed a Caesar Salad with grilled shrimp.  For dessert, David took the Apple Cinnamon Tacos.   Think delicious apple pie inside a cinnamon sugar taco. 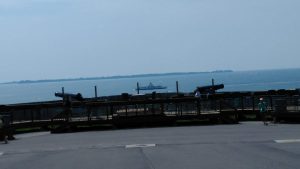 The next day, our time in Kingston was coming to an end.   We still had time to squeeze in a few activities.  First on tap was a discovery cruise with Kingston 1000 Islands Cruises.  The cruise was a perfect one hour introduction to the Kingston waterfront.  We learned the importance of Kingston as a maritime centre. Notable highlights included seeing Fort Henry from the water.  Thankfully today,  Kingston is better known for its sailboats rather than gunboats.

We were so impressed with Fort Henry that we wanted to go check it out.  I liked the touch of the sentry guard giving us Covid advice.  There was plenty of other on-site animation.   We were treated to a musket shooting.   Don’t worry,  live bullets were not used.  Perhaps even more impressive,  all of the Fort Henry workers were wearing wool period costumes on a day when it was 30 celsius.   That shows dedication.

Sadly,  it was now time to leave Kingston.   We felt we had learned a lot more about Kingston’s history and had a great time doing it.

If you go –  The best place to find the most up-to-date information about Kingston is at www.visitkingston.ca

Where to stay – We had a great stay at the Holiday Inn Kingston Waterfront.   All Covid regulations were followed with staff and guests wearing masks when in the common areas. We felt very safe. 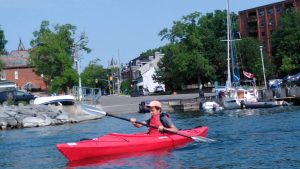 The hotel is conveniently located in the downtown core.   Our room was very comfortable with a scenic view of the Kingston waterfront.   The food we had at the Wharf and Feather was excellent.

Where to eat –   Kingston is a city with great restaurants.   We had a number of great meals including at the Black Dog Tavern.   The food was certainly beyond what you would find at most pubs.   If you are looking for a burger,  you will not go wrong checking out Harper’s Burger Bar.   Some of the unique ingredients offered include roasted red pepper and fried egg.

For pizza,  I would suggest Wooden Heads.  Their pizza is wood-fired.   We enjoyed the bambino which was pesto, lemon chicken, feta and sundried tomato.

Pan Chanco Bakery is an institution in Kingston.   We got takeout for breakfast and loved their croissant egg sandwich.   The line that formed at 8;00 am on a Saturday can attest to their popularity.