Lake Placid is a town that has always punched above its weight.   Even though the town’s population has only ever numbered a few thousand,  it has played host to the Winter Olympics in 1932 and 1980. It is also home to one of the most iconic moments in American sports.  I am referencing when the underdog American Olympic hockey team beat the Russians 4-3 in the 1980 gold medal match. 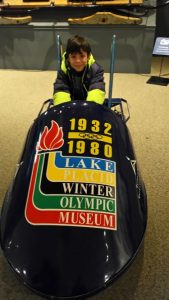 Our family set out on a trip to Lake Placid to learn more about the Olympic history of the town.  We arrived later afternoon fittingly during a snowstorm. It is easy to understand why Placid has been home to two Olympics.   The town is surrounded by the Adirondack mountains and is set on Mirror Lake. During the winter Mirror Lake is transformed into a winter wonderland with dog-sledding and ice skating just being a few of the activities.

We checked into our hotel,  High Peaks Resort and had a restful sleep.  The following morning, we started our Olympic trek with a visit to the Olympic Jumping Complex.  We were able to reach the top of the 120 metre jump by gondola and elevator. The observation deck gave us the perspective of a jumper. Needless to say, the views were stunning.

We returned to Lake Placid and had a light lunch along Main Street.   Our next destination was the Lake Placid Olympic Center.  The Olympic Center is home to the arena where the Americans beat the Russians in the Olympics.   The Center also contains the original arena where famous figure-skater, Sonja Henie won the gold medal in the 1932 Olympics.

The original arena has been refurbished but one can still imagine Sonja Henie gliding across the ice.   The day we visited, there was a hockey tournament going on so body checks and slapshots were more the order of the day.

We then proceeded to the Herb Brooks arena.  Brooks was the winning coach for the American team.   Again, the hockey tournament was still going on. In a twist of fate,   two teams from Canada were competing against each other. The game was not quite the Miracle on Ice compared to the 1980 match but we did enjoy high-calibur hockey that went to a shootout.

All of this hockey made us want to check out the Lake Placid Olympic Museum.  The museum was conveniently located in the same complex as the skating rinks.   There were multiple displays on the 1932 and 1980 Olympics. I particularly enjoyed the exhibit about Sonia Henie.  I did not realize she was such a big star after the Olympics.

David gravitated to the exhibition about the Miracle on Ice victory.   The game was playing on a tv and there were various information panels about the match.  The display gave him a good overview of the historic event.

David also enjoyed posing by the Olympic rings and the bobsled found in the museum. 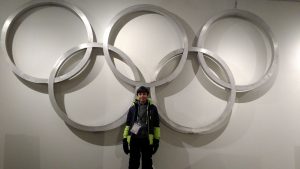 Our Olympic adventures had made us work up an appetite.  We found the restaurant, Delta Blue. I loved the interior which mixed Adirondack rustic cabin style with a New Orleans blues club.  David tucked into his burger and said it was awesome.

We also passed a fun time as I taught David how to play pool. He soon became a pro sinking shots that I missed.

We headed back out onto the street. When Sandy and David were buying an ice cream, I got to meet members of the Great Britain skeleton team.  That is the great part of Lake Placid, Olympic hopefuls casually mix with locals and no one bats an eye.

The best place to find information about events and activities in Lake Placid is www.lakeplacid.com.