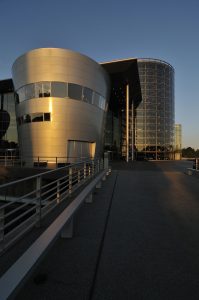 Dresden was once among Europe’s most beautiful cities. A jewel of Baroque architecture. Home to the rulers of Saxony in eastern Germany close to the Czech border, until the allies’ intense bombing of the city in February 1945. Much of this city was left in ruins. Citizens voluntarily began clearing the rubble. Slowly, Dresden rose from the ashes. The fall of the Berlin Wall and foreign donations spurred a massive restoration to return the city to its former elegance, the days when it was also an intellectual and cultural centre.

The city was created by Augustus I, also known as Augustus the Strong. His nickname supposedly came not from his valour but from his number of mistresses. The Elector imported artisans and architects, mainly from Italy, to create buildings worthy of the name “the Florence on the Elbe.” In Neumarkt (New Market) square, the heart of the historic district since 1548,cafes with outdoor patios partially circle Augustus the Strong’s statue. Across the square, a statue of Martin Luther and the symbol of Dresden, the Lutheran Frauenkirche (Church of Our Lady). 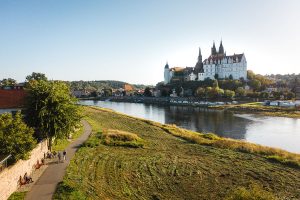 Since the 11th century, a church has occupied this site. The present version was built in 1743 as a Lutheran church. The Elector had converted to Catholicism, the conversion necessary to also become King of Poland. Still, he supported the church’s construction to avoid alienating Saxony’s predominantly protestant population. White, pink, and blue colours counterbalance the church’s richly decorated interior of gilt overflowing around the altar and statues. For great views of Dresden, and if you’re energetic, take the elevator and then walk up a narrow, steep ladder-like staircase to the circular walkway around the 67-metre-high dome. The gold cross topping the dome was a gift from the main supporter of the church’s reconstruction, the Dresden Trust, based in Coventry, England. Many consider Dresden’s wartime destruction as retaliation for the German Luftwaffe’s ruthless bombing of Coventry Cathedral. Another church on the square, the Evangelical Lutheran Kreuzkirche (Church of the Cross) is famous for its boys’ choir. Their elaborate musical Vespers, a tradition since 1351, occur most Saturdays at 5 p.m. Princes, Dukes, and Kings, ride on horseback across a 101-metre-long mural made of Meissen porcelain. More than 2400 tiles portray the history of Saxony’s ruling family on an exterior wall along the nearby Royal Mews. The Procession of the Princes leads to Katholische Hofkirche, also called Cathedral of the Holy Trinity. Commissioned by Augustus the Strong’s son, the Catholic Court Church is unique in Saxony, the birthplace of Protestantism. This Italian designed Baroque masterpiece, Saxony’s largest church, delights the eye with a Rococo gilt-trimmed pulpit and, in contrast, the Memorial Chapel’s modernistic porcelain altar. Listen to free organ concerts every Wednesday and Saturday. Tour the crypt with its tombs of the Saxon Kings and an urn holding the heart of August the Strong. The rest of him lies in Krakow, Poland. This year, 2021, marks the opening of the restored Residenzscloss (the Presidential Palace.) Home to the electors since 1556, it’s one of the most significant Renaissance palaces in Germany. Inside, meet August the Strong, or at least his life-size figure, dressed in his Roman-style coronation regalia, complete with a life mask. The ornate throne room and royal bedrooms give a glimpse of royal life until the last King’s abdication in 1918.The palace’s series of museums feature Augustus’ gold wedding suit amongst the royal robes and historical collections of currency, Ottoman art, and armoury, with life-size statues of jousting knights on horseback. The most dazzling display is in the Green Vault. Rooms are as opulent as the contents. Inside the Silver Gilt Room, the Ivory Room, the Bronze Room, and Amber Cabinet lie Europe’s largest collection of treasures. Rare and beautiful objects such as a massive green diamond from India, vessels made of ostrich eggs, and the crown jewels. A visit to Louis XIV’s palace of Versailles stirred August the Strong’s desire for an equally grand residence. The first stage was the Zwinger, built as a playground for tournaments and other court games played by the nobility. Construction began in 1707.In the centre of the large quadrangle, formal gardens, pools and fountains form a deep curing bay enclosed by linked pavilions. All festooned with garlands, nymphs, and other baroque ornamentation. Sculptures of nude females lurk in the alcoves of one hidden garden, protecting themselves from a fountain that spouts unexpectedly. This masterpiece of baroque architecture houses several museums, from zoology to scientific instruments. The most visited are the Dresden Porcelain with Augustus the Strong’s Ming Dynasty porcelain and Meissen crockery and sculpture collection and the Old Master Collection highlighting 15th to 18th century works by Rubens, Holbein, and Murillo. 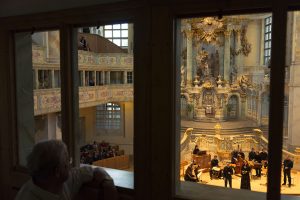 The Zwinger was originally intended to be the forecourt for Augustus’ castle, but he died before construction began. Instead of a royal residence, the site on the banks of the Elbe River is now home to the Semperoper Opera House. The history of opera in Dresden goes back to 1667. Rated one of Europe’s most important, its reputation attracted such notables as Richard Wagner. He became court conductor in 1843. Over 40 works premiered here, including “Salome” and“ Elektra” by Richard Strauss. Considered one of the world’s most beautiful opera houses, the two-tiered façade of the High Renaissance style Semperoper is also the concert hall for the Saxon State Orchestra and Semperoper Ballet. Paddlewheel steamers offer a relaxing view of Dresden. Starting from the dock in the historic centre, ships sail down the Elbe. Trips of one to six hours pass at least one castle. The Saxon Steamship Company also sails nearly to Prague in the Czech Republic. You can take a boat to the Meissen factory, although we went by commuter train and bus, a 40-minute journey. The three-floor museum, store, and factory, wow visitors with a stunning presentation of some 3000 pieces from an Art Nouveau vase for the 1900 Paris Expo to Catherine the Great’s 1745 sumptuous dinner set. Europe’s oldest porcelain factory, Meissen, began in 1710 in Albrechtsburg castle. The Late Gothic palace, opened around 1495, towers over the town of Meissen and the Elbe River. Germany’s oldest castle is an easy walk from the factory. Augustus the Strong selected this isolated location to keep secret the process of making “white gold.” A process that was previously only known to the Chinese. Exhibits recall the story of the alchemist’s three-year search for the formula. The castle alone is worth visiting for its historically accurate restoration. After Meissen moved to its own building, the palace opened as a museum with a spiral staircase rounding around a filigree carved railing and the high vaulted ceilings and furnishings. Reparations from France for the Franco German war helped fund the Great Hall’s swath of murals depicting scenes from its past. Volkswagen’s “Transparent” Factory offers tours of its modernistic
glass building, giving you the rare opportunity to get close up to cars being manufactured. The plant is within walking distance of the city centre. 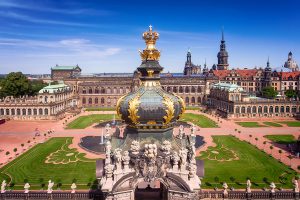 If you go:
There are no direct flights to Dresden.

Getting Around
Most major sites sites are in the compact, easy-to-walk historic centre. If you want to go across the river to the newer part of Dresden for the bustling shops and trendy nightlife scene, purchase the Dresden City Card covering tram and bus fares and free admission to some museums. Prices start at €6.50. 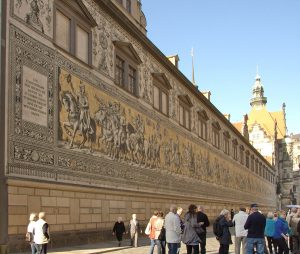 Where to Stay
Steigenberger Hotel de Saxe on Neumarkt Square, modeled on 1789 houses once located here, provides luxury accommodation. A lower-priced option is Steigenberger’s Intercity Hotel. Located across from the train station, it supplies guests with free tram and bus tickets. 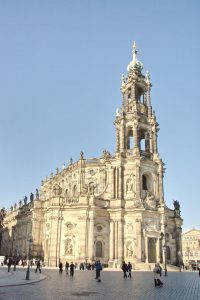