Story and photos by Sherri Telenko 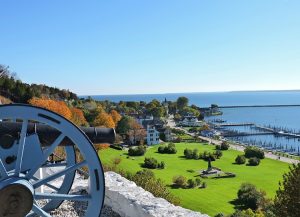 Summer built Mackinac Island’s tourism industry, or more specifically ‘summering’ starting two decades ago. Yet spring is when you’ll experience the island refreshed, the most elbow room and frankly, the best value (if you book early).The horses are back on the island too. And that’s important.

Imagine a 21st century where we invented everything we have now, except the car. You have access to Wi-Fi, electricity, air conditioning, air and boat travel, fine dining and television. But no cars. Horses and bikes get you everywhere you need to go, and you don’t need to go far.

Mackinac Island in north Michigan (south of Sault Ste. Marie, Ontario) is that place. Thousands of people head to the island via ferry throughout the summer, but only 500 stay and live there all year. That’s been true since the late 19th century when the well-heeled summered here — and banned automobiles the moment they were
invented.

The no-car law has been in place since 1898, and with only a few exceptions (police cars and an ambulance for instance), no motorized vehicles are permitted on the island. You have no choice but to slow down.

Mackinac Island is a vacation destination from October to April; it’s a retreat from reality. Time slows when you’re waiting for your horse-drawn carriage to pull up and tour you past the Grand Hotel that’s attracted diplomats and celebrities since 1887.Remember Somewhere in Time with Christopher Reeve and Jane Seymour? It was filmed at the Grand Hotel in 1980. This palatial Victorian accommodation, with
no two guest rooms the same, boasts a Retreat Even A car-free visit on Mackinac Island might be just the ticket after months of necessary
social isolation historical guest list (including Mark Twain), and the museum quality lobby so popular, there’s a $10 admission fee for nonregistered guests to visit.

The island has all types of accommodations: bed and breakfasts, rental cottages, hotels along the main street and full service resorts, like Mission Point Resort. But no name brands. Along with cars, no chains are allowed on the island (except, somehow, Starbucks). Therefore, all hotels, restaurants and shops are unique to Mackinac, including the fudge shops — a staple on the island.

Mackinac Island fudge is infamous around the state and you’ll need a bite of decadent energy to make your way around this island that’s two-thirds state park, and therefore scenic — especially in spring and fall. An appreciation for crisp clean air and the great outdoors is mandatory.

Stay at the Mission Point Resort and the Straits of Mackinac will be outside the door. Here, you’ll be close to the water and access to Arch Rock and the Dwightwood natural springs trickling from the rock side, all within a 20-minute walk of the ferry dock. This 240-room resort, with three restaurants (including the upscale Chianti), was built in 1946 as the “moral re-amendment association,” re-visioning a remote peaceful lifestyle. It was converted to a hotel in the mid-1980s. There’s a putting green near the waterfront trail and open space full of white Muskoka chairs facing the water.

How does the Mackinac Island journey begin? 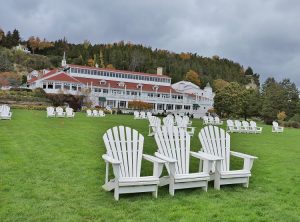 First, drive to either Mackinaw City or St. Ignace in Michigan. Two main ferry companies service both cities: Star Line and Shepler’s. You can book online or when you arrive. During the shoulder-seasons, ferries run on the hour, so it’s worth checking the schedule and arriving at least 15 minutes before one departs. The ride takes about 20 minutes on a calm day.(On a windy day, it’s rough.)

Second, park your car on the mainland (either in the parking garage and shuttle to the ferry, or in the adjacent ferry parking lot for $25), check your luggage, and then board the ferry. Your luggage is transported to your hotel, so you only need to walk off the ferry and along the waterfront to your hotel. Or take the island shuttle: a horse-drawn trolley for five-dollars that takes you to the steps of hotels like Mission Point.

The horse-drawn carriages of Mackinac Island make for postcard perfect photos, but horses — as beautiful as they are — are the second most popular form of transportation. The first is bicycles. You can rent bikes anywhere — at the hotel, near the ferry terminal and along Main Street near the marina — by the hour or day.

Bikes are everywhere. That’s the traffic you’ll have to negotiate. Housekeeping and maintenance workers cycle from guest house to B&Bs to service rooms and sometimes carry luggage from the ferry terminal. Road cleaners ride bikes with bins, picking up about 1400 pounds of horse manure a day. And tourists ride up (hill) and down streets visiting State Park sites and Fort Mackinac. 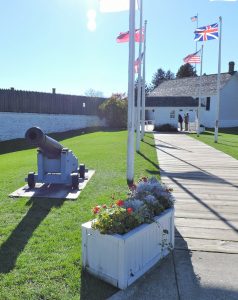 Two sites on Mackinac Island everyone must see: the historic state park and Fort Mackinac. Fortunately, one is inside the other, making the journey easy — via carriage, bike or walking.

‘You don’t visit Paris without seeing the Eiffel Tower,” Dominick Miller, Marketing Manager of Mackinac State Historic Park says referring to the Fort. Fun fact: the fort contains the oldest public building in the
state, and it was originally built by the British.

Fort Mackinac was first erected by the British in 1780 to defend the Straits of Mackinac, then a busy thoroughfare of the fur trade. The fort was used during the War of 1812 by Red Coats, and much later by 19th century American soldiers. Today, it’s open to the public as a living history site filled with costumed interpreters, daily cannon firings, bayonet demonstrations and regular programming from May to October when both the Fort and island are most active. Fourteen historic structures tell the story of 115 years of military training and battles, medical treatment and family life within the fort.

Come for the history lesson, stay for the view. Understandably built on the island’s bluff, this is the ideal location to capture a panoramic
snapshot of the island’s most travelled side, the marina and ferry docks and across the water to the bridge connecting Michigan across the straits.

You can stand and look of course — or take a seat on the Tea Room patio and enjoy it for longer.

The Tea Room, operated by the historic Grand Hotel located on the island, is open daily for lunch until three in the afternoon. Not only do you get the best view of town here, you don’t have to pay the Grand Hotel’s entrance fee…just the Fort’s, which also gives you admission to the Mackinac Art Museum and other historic buildings located downtown

In 1895,the U.S. army removed soldiers from the site and transferred the fort and park to the state, creating Michigan’s first state park and the Mackinac Island State Park Commission. Most of the island is state park, and even the stately Victorian summer homes lining the bluff are on park property — land rentals generating revenue for the commission.

Walk to the fort, ride a bike or hire a horse. Private carriage rides are the best way to tour Mackinac because firstly, they offer a great view and secondly, a history lesson. Companies like Mackinac Island Carriage Tours pick up riders at hotels for a private two-horse ride. Most start along the standard route — past the Mackinac Fort, past million-dollar Victorian vacation properties, past the summer residence of the Michigan Governor and along Market Street — but a few will off-road it through the trails of Mackinac Island, if requested. 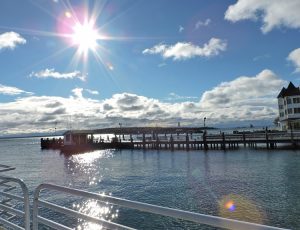 It is possible, to fly from Ottawa to Sault Ste. Marie and then rent a car and drive to St. Ignace
and take a ferry to Mackinac Island. Ferry is the only way to get onto the island. Or drive the entire way (about 10 to 14 hours) from Ottawa to Michigan, possibly stopping in Sudbury.

Mackinac Island has everything from coffee shops to cafes, ice cream and fudge (a specialty on
the island) to formal dining. But no chains or franchises (except for Starbucks). Seabiscuit Café
downtown is a pub celebrating the famous horse in an 1800s former bank. The Pancake House
serves classic American meals and breakfast all day.

Mission Point Resort offers the Boxwood coffee shop with take-out sandwiches for picnics; casual breakfast lunch and dinner in Round Island Bar & Grill, and seasonal dinner menus including classic fish (including Bay of Fundy grilled salmon),steak and pasta dishes at the elegant Chianti. 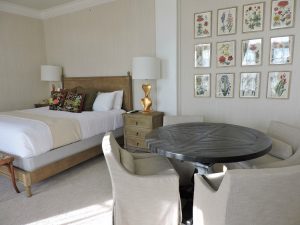 Meals are included in the plans if you stay at the Grand Hotel. However, the breakfast ,lunch and dinner buffets in the main dining room are available for non-guests, ranging in price from $30 to $85 per person. And if you go to Fort Mackinac, lunching on a sandwich or wedge salad from 11 am to 3 pm at the classic Victorian Tea Room (run by the Grand Hotel) is almost mandatory.

Mackinac Island has every type of accommodations (except camping) from B&Bs ,historic hotels
above downtown stores, historic properties like the Grand Hotel and full-service resorts such as
Mission Point Resort which opens in 2020 on April 24 and offers a CARP (and AARP) discount. This 240-room resort was built in 1946,converted to an hotel in the mid-1980s and last winter underwent a contemporary update.

There’s a putting green across from the resort along a waterfront trail. Nearby, Bistro on the Greens is a casual outdoor patio and open during summer months only — and it’s dog-friendly. Nick is the resident dog. He’s part Border Collie and it’s his job to chase the wild geese off the front lawn. Sometimes he’s hanging out in the lobby and is very sweet and curious.