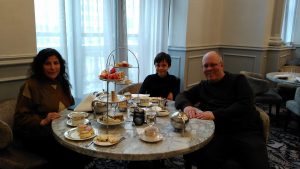 I remember seeing the Chateau Laurier when I moved to Ottawa nineteen years ago.  At first, I thought it was an extension of the parliament buildings or perhaps was the project of a wealthy lumber baron from yesteryear.   I quickly learned that it is one of the most iconic hotels in Ottawa and Canada. Living in Ottawa, I never really considered staying overnight.

That all changed after the winter we have just gone through.   My wife Sandy, our son, David and myself felt like we needed a staycation.   A stay at the Chateau Laurier perfectly fit the bill. It felt strange walking into the hotel with our overnight bags.   Of course, Ottawa was very familiar but I also had the feeling of being a tourist in my own city.

After check-in,  we proceeded to our room.   We were fortunate to have a view of the Rideau Canal locks and Parliament Hill.   Nothing screams spring more than seeing the water rushing in to fill the locks. Some people were jogging in nothing more than shorts and a t-shirt.   Winter parkas seemed a distant memory.

We decided to go for a walk in the Byward Market to profit from the nice weather.   The market had the vibrancy you would expect on a Saturday night.   It was still fairly early so the party crowd was replaced by families and couples strolling about.   Normally, Sandy, David and I are more likely to be taking a walk in our local park or nestled in watching a movie this time of night so it was a nice change of pace.

Seeing the Byward Market from a different perspective got me thinking of all the other interesting tourist possibilities near the Chateau.  Perhaps the most obvious one is a tour of the refurbished West Block on Parliament Hill and the old Ottawa train station which has been remodelled to house the Senate of Canada for at least the next decade.   We took a tour of each in early February and both are stunning. The Senate is literally across the street from the Chateau Laurier.

Another good choice would be a visit to the new Ottawa Art Gallery.   We enjoy visiting the gallery not only for the outstanding artistic works but also for a slightly hidden terrace that overlooks Waller Street and the Mackenzie King Street Bridge.

Neither art nor tours of parliament were in our plans once we returned from our walk.   We wanted to go for a dip in the swimming pool. Constructed in 1929 the pool has a beautiful art deco design.   One could imagine royalty and movie stars from a bygone era going for a swim. I loved the full length lounge chairs which were perfect for relaxation.

After the swim,  we were almost ready to call it a night but wanted to explore the hotel further.   We loved seeing the historical photos giving the backstory of the hotel. I did not realize what an important role the hotel has played in the history of Ottawa and Canada.    Many famous guests have stayed at the hotel including Winston Churchill and Pierre Trudeau. The hotel was named after Prime Minister Wilfrid Laurier and was opened in 1912. We took our photo beside the bust of Laurier which can be found in the front lobby.

It was now time to turn in pleasantly exhausted from a busy day of staycationing.

The following morning, we had nothing more serious to worry about other than where to take breakfast.    Several colleagues of mine had stayed at the Chateau and highly recommended the food at the hotel restaurant, Wilfrid’s.

The food did not disappoint.  I am frankly used to hotel buffets where the eggs and sausages have been under heat lamps for too long.  The buffet at Wilfrid’s tasted incredibly fresh. Our favorites were the crepes and smoked salmon. The selection of fresh fruit and juices was also very extensive.  The service was very friendly and attentive. It was nice to have a break from the normal Sunday morning routine that involves having to make the food and then also do the cleanup.

We were not done our staycation yet.   We had also booked afternoon tea at the Chateau for  3:00 pm. Like any good marathon runner, we knew we had to pace ourselves.  After the delicious buffet, we hung out in our hotel rooms and then went for a long walk behind Parliament Hill to build up our appetite.

The time had come for afternoon tea at Zoe’s Lounge.  We first got to select our teas.  I chose a pomegranate while Sandy and David chose a berry tea.  We were also provided with a three-tiered tray which featured an assortment of treats including finger sandwiches, scones and desserts.   We started with the scones, homemade jam and cream. They were delectable. The finger sandwiches were next with my personal favorite being the cucumber.  We finished with the desserts which were also delicious. 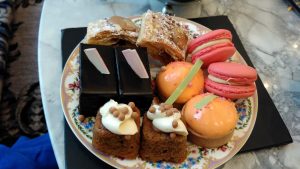 Sandy, David and I loved the afternoon tea as it harkened back to a time of old-fashioned elegance.  We felt like we could be in London. England at Buckingham Palace having an audience with the queen.

It was time go head back to another Chateau, the Chateau Johnson.   We got a chance to see our city in a different way, enjoy the classical elegance of the Chateau Laurier and skip all those dishes.  The perfect staycation in our books.

For more information about the Chateau Laurier visit www.fairmont.com/laurier-ottawa/

Photos and article by Stephen Johnson