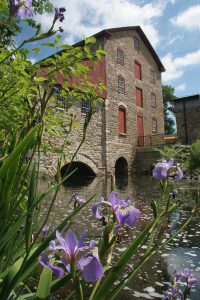 The backroads and small towns of Ontario are filled with treasures of the past and the vitality of the present. Countless talented craftspeople choose to live along the country roads and offer their wares to the interested passers by. An enchanting and historic area off the beaten track lies in the County of Leeds and Grenville.

The Bastard Ward of Rideau Lakes Township is replete with history and wonderful places to discover. Bastard Township was settled in 1794 by United Empire Loyalists. The most entertaining story about how the name of the township became Bastard Township is that Elder Abel Stevens, who was sent to Toronto to register the name of the municipality as “Stevenstown” after relatives and himself, was too embarrassed to utter the approved choice of name and suggested that there was no “father of the community” after which the township could be named. The clerk said, “Well, then, it’s a bastard township.” and duly wrote it into the books. The true story, probably, is that John Graves Simcoe, the Governor of Upper Canada, was a personal friend of John Polloxfen Bastard, a British MP representing Simcoe’s home riding, and the township was named after him. There have been several attempts to change the name, but stalwart citizens have responded with buttons and slogans announcing, “I’m proud to be a Bastard!”

The Village of Delta was located on Beverley Lake and originally called Stevenstown. When a dam was constructed for the mills, it raised the water level of the second lake called Upper Beverley Lake, thus creating a “delta” on which the town stood. It was subsequently renamed Stone Mills and Beverley, and finally Delta, in 1856.

A Heritage Walking Tour of Delta (twprideaulakes.on.ca/deltatour) will take you to view a half dozen, architecturally interesting, beautifully preserved buildings from the 19th and early 20th centuries that line the main street. Notably, the Walter Denaut House was built in 1849 by a mill owner, postmaster, general merchant and the first reeve of the township. It has been transformed into the Denaut Mansion Country Inn (613 928-2588; denautmansion.com), 5 Matthew Street, which offers a generous breakfast from locally-sourced products. The historic Denaut family cemetery is in the eleven acres of woods. The magnificent Old Stone Mill at Delta (613 928-2584; deltamill.org), 46 King Street, now a National Historic Site, was built in 1810 north of the original mill that Abel Stevens had constructed in 1796. It continued to be fully operational until 1949. The mill showcases many artifacts and exhibits, telling the story of the building and the evolution of the milling process. It also offers for sale on Saturdays, bread and cookies made from the flour ground at the mill.

A number of events draw visitors to Delta. The Maple Syrup Festival (613 928-2585) is held the third weekend in April. The Delta Fair (613 928-2800; deltafair.com) has been held every year since 1830 and takes place in the third week of July. Old Bastards Vintage Motorcycle Rally runs the first week of September. Harvest Festival is at the end of September. Magically lit buildings and trees Celebrate the Season from mid-November to mid-December.

Delta has a few retail outlets that provide the needs of the community. A call ahead to the Bastard Baking Company (613 770-5759; bastardbakingcompany.com) can order a scrumptious menu of dessert items. Delta Foodland (623 928-2030) has a full line of vegetables, meats and dry goods.

The Daytown Road will bring you to Plum Hollow, no longer a settlement but interesting for its history. When the settlers first arrived, they found a grove of plum trees in a hollow. Mother Barnes or “The Witch of Plum Hollow” was born Jane Elizabeth Martin in 1794 in Ireland. She was a famous clairvoyant and fortune teller who read tea leaves. She is best known for the accurate prediction that Bytown would be the site for the Parliament Buildings. A monument to her is in the cemetery, and her log home and a cairn are located on Mother Barnes Road. Plum Hollow was also famous for its Plum Hollow Cheese Factory from 1924 to 1982, which then became a chocolate factory, and was subsequently destroyed by fire. 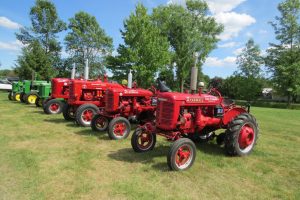 Known for the nine murals that made Athens famous by the late 1980s, the Township of Athens is rich in history. John Dickson settled twenty-five kilometres west of Brockville in 1784 and the community became known as Dickson’s Corners. Scottish, Irish and English immigrants joined the United Empire Loyalists in settling the area. As an agricultural centre which hosted one of the first agricultural exhibitions in Ontario, it was renamed Farmersville when the post office opened in 1836. Joshua Bates built the first store and grist mill and became the first postmaster. When the village became an educational centre with a grammar school, a model school and a high school, prosperous merchant, Arza Parish, suggested in 1888 that the town be renamed Athens after the Greek centre of education. The beautiful old town hall was opened by Sir Wilfred Laurier in 1905 and currently also houses the Joshua Bates Centre (613 924-2044) which features music, theatre, dancing and art. The Athens Heritage Museum (613 924-2644), 12 Wellington Street East, houses artifacts from the early days of the settlement and archives relating to local history. In summer, the town comes alive with blossoms. 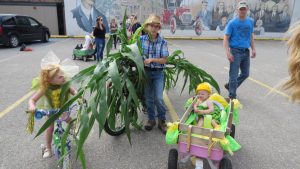 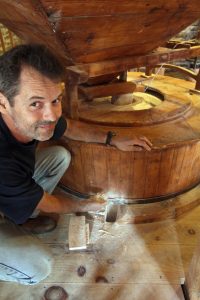 The Farmersville Steam Fair celebrates the third week of July with vintage machinery, a craft fair, old-time fiddling, a vintage tractor pull, horse draws and a parade. The Cornfest is billed as “the corniest event of the year” and is held each year on the third Saturday in August, as is the Annual Athens Truck Show hosted by Antique Truck Club of America — Upper Canada Chapter. A tradition attracting thousands is the annual Christmas Parade of Lights, an hour of brightly lit floats, in the first week of December.

Just south of the Village of Athens and part of the community is the spectacular tourist haven of Charleston Lake. Blessed with two marinas, Lakeline Lodge and Marina (613 924-9114) and Kelsey’s Marina (613 924 2568), the lake offers spectacular views and facilities for fishing, boating and more. Charleston FX is an annual event to celebrate Canada Day, sponsored by a local group of volunteers who love the beauty of the lake and love sharing it through fireworks. From the third week of November to December 31 from 5 to 9 p.m., the MacGregors’ Christmas Light Display and Miniature Village (613 340-9671), 579 County Park Road, attracts thousands upon thousands to view the festive lights, beaming Santas, snowmen, as well as a large indoor village display. Across the road, Krista Cameron’s Charleston Pottery (613 924-7125) at 582 County Park Road, showcases her exquisite designs. 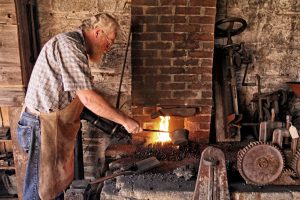 You can stop at The Township of Athens (613 924-2044; athenstownship.ca), 1 Main Street West or email (info@athensontario.com) for information while you are in Athens. Information on Delta and Plum Hollow and other historic communities is available at the Township of Rideau Lakes (800 928-2251; twprideaulakes.on.ca), 1439 County Road 8, Delta.

The delight of this countryside is the joy of discovery and so many interesting and scenic places lie waiting for the visitor to happen upon them. It would be impossible to list all of the businesses and attractions in this area, so this article is meant to highlight only a few. Since country businesses may not be open on a regular basis or may have seasonal hours, it is wise to call ahead. Take the time to travel some remarkable country roads.