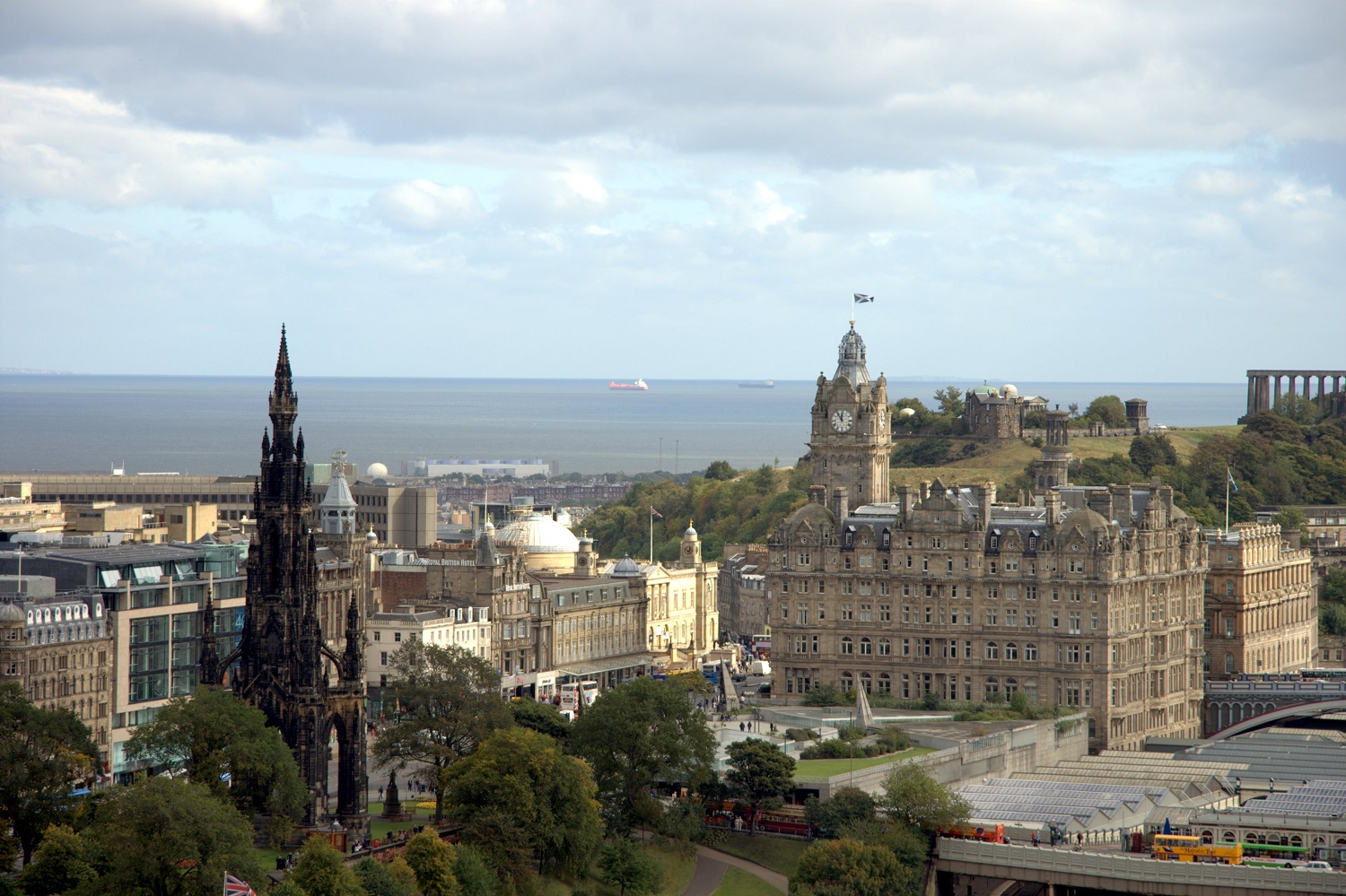 “Edinburgh is a very easy city to fall in love with,” says Alexander McCall Smith. The Scottish author adds, “It’s so beautiful; and intriguing.” Draped over seven hills—like Rome—Edinburgh is a living history museum. The streets filled with reminders of its turbulent past. Edinburgh Castle looms over the city from atop a volcanic rock. The massive stone fortress endured numerous sieges by the British. Bonnie Prince Charlie made the last attempt in 1754. The castle remains an active military base—the Governor is the Head of the Scottish army. A tower garnished with a gold-trimmed clock crossed swords and a crown distinguishes the royal residence. Frescoes lighten the small wall-panelled room where Mary Queen of Scots gave birth to James VI in 1566. Symbols of Scotland’s ancient Kingdom glitter in the Crown Room. Among the treasures, some rediscovered in a locked room by Sir Walter Scott, the oldest intact crown in Europe—a circlet of gold dating back to Robert the Bruce—and the Stone of Scone. The red sandstone stone looted by Edward I in 1296 became part of English monarchs’ coronation ceremonies. Exactly 700 years later, Queen Elizabeth returned the stone to Scotland on condition the Scots ship it back for future coronations. Inset iron rings simplify moving the rock. No people did more to extend and defend the empire than the Scots. “We’re known as fighters,” says Bill Hansen, guide with Heart of Scotland Tours. Underlining this history are the Scottish National War Memorial, three military museums and the Prisoners of War exhibit. Model ships, forged banknotes and graffiti made by American sailors captured during the War of American Independence and other prisoners jailed in the castle’s vaults. Executions—by hanging, beheading or burning—took place on the Esplanade, site of the annual Tattoo. Part of the parade ground supposedly belongs to Nova
Scotia, thanks to King James VI designating a section in 1624 as Nova Scotian territory. Wanting to establish a colony called New Scotland (Nova Scotia), the King sold baronet titles, but the Scottish landlords didn’t have to travel to Canada. Instead, they could visit the Esplanade to receive a handful of dirt from the King’s representative. 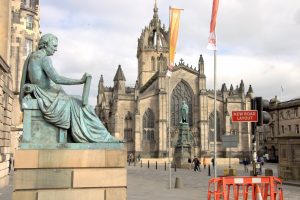 Old Town
Many 17th-century tenements, the world’s first skyscraper, still line the Royal Mile, the street running downhill from the castle. Some up to 14 stories tall—all without elevators. Overcrowding forced the wealthy and the poor to live in the same tenement: a unique democratic society for the period. Dark, brooding passageways known as closes (narrow alleys created by tenements being “close” to each other) even now wind through Old Town. At The Real Mary King’s Close, descend into 17th-century Edinburgh, the underground concealing streets lined with houses and shops. After the plague struck in 1644, the city sealed off the entrances to Mary King’s Close to prevent the disease from spreading. In the shadow of one home, a mannequin of the plague doctor lances Johnny Craig with a hot iron to disinfect the wound. His grave digger father lies in a sheet waiting to be collected.” About four per cent of the sick were buried alive. People couldn’t tell the difference between the dead and the unconscious,” says guide Stephen Boyd. Typical of private medieval residences is the John Knox House with its projecting second floor gallery. Knox, who brought Calvinism to Scotland, died here in 1572. Statues of saints and clergy fill the niches fronting Edinburgh’s first parish church, St. Giles Cathedral. Founded in 1124, the church under Knox was stripped of its Catholic decoration. His statue complements the stained glass window featuring the fiery preacher. The medieval atmosphere flows into the small Thistle Chapel housing Scotland’s Order of Chivalry. The 24 members sit in elaborately carved wood stalls. Gargoyle-like figures and crests representing that knight’s achievements top the stall. The head of the Order, the Queen, reigns from the stall with the tallest pinnacle. Each step down the ridge from the castle reveals another facet of the city’s history. Look up to see what could be called “daylight robbery.” Some windows are blackened, stones fill others, a reaction to William Pitt basing taxes on the number of windows in a building. Princess Anne’s daughter, Zara, was married at Canongate Kirk, the church of the monarchy and the military.  Constructed in 1690 by order of King James I, the curved roof church bear s the Royal Arms of William of Orange above the entrance and those of the present Queen o n the pulpit. A wall protects the church and adjacent graveyard. Watchtowers hover over some Scottish grave yards, a deterrent against body snatcher s who sold recently buried corpses to the medical school. Such de fences didn’t daunt William Burke and William Hare. Instead, they sought live bodies, killing at least 20 people. Burke’s skeleton hangs in nearby Edinburgh University’s medical school. Exactly one mile
from Edinburgh Castle, the Royal Mile ends at the jarringly modern Scottish Parliament opposite the Queen’s official house in Scotland, the classical-style Palace of Holyrood house. Alongside the palace, the ruins of a 12th-century abbey where Mary Queen of Scots married Lord Darnley. Bonnie Prince Charlie turned the palace into his headquarters. His portrait hangs in the dining room, where a table displays some of the 3,000-piece silver service presented to the Queen’s parents. Tapestries ordered by Queen Victoria counter the gloom of the Drawing Room. In Charles II’s opulent Bedchamber, one painting compares the King to Hercules. A portrait gallery connects the King’s apartments to the tower apartments of Mary Queen of Scots. A spiral staircase leads up to her private quarters with its 17th-century crewel-worked floral bedcover and curtains, embroidery similar to modern-day floral designs. Marks on the floor indicate where her jealous husband and his cronies killed her private secretary. A mountain wilderness covers Arthur’s Seat, a volcano overlooking the palace. Another extinct volcano rising above downtown is Calton Hill, author Robert Stevenson’s favourite viewing spot. Spread over the hill, an eccentric mix of a Greek-style memorial temple, a neoclassical Observatory and the spyglass-shaped Nelson Monument. 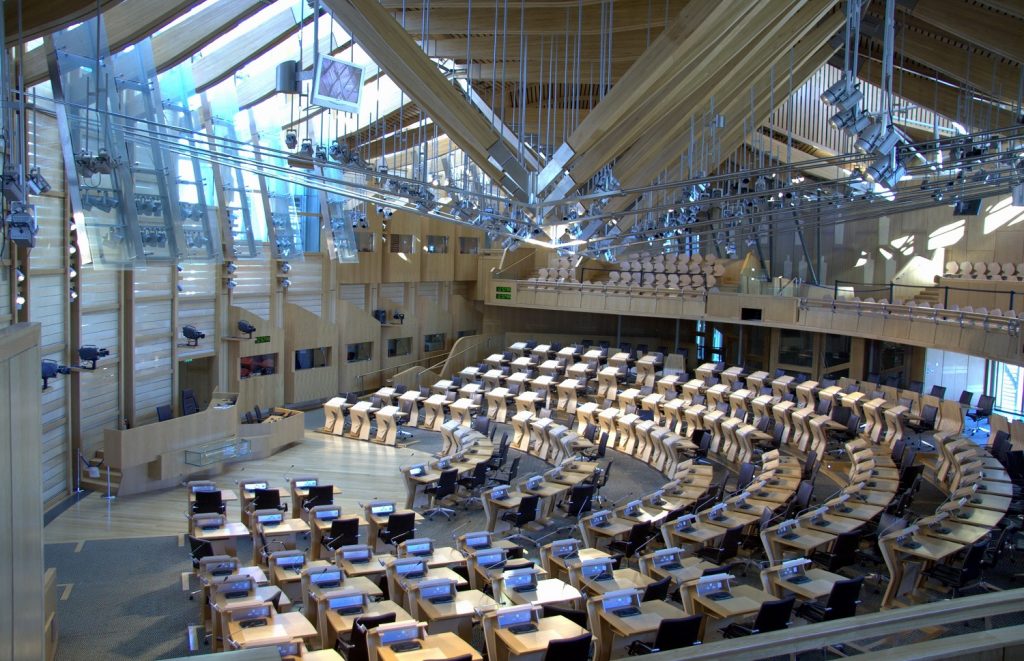 New Town
The stink and squalor from chamber pots being emptied onto the streets in the mid-1700s spurred the city into constructing New Town. This development below Old Town’s walls boasted wide streets fronted by stylish Georgian-style townhouses. New Town’s crowning glory is Charlotte Square’s north side. The harmonious redesign crafted by Robert Adam hired after complaints facades were too plain. No. 6, Bute House, is the official residence of Scotland’s first minister. Next door, Georgia House, built for the Chief of Clan Lamont, maintains its original ovens in the basement kitchen and upstairs, exquisite Georgian style furnishings. New Town’s construction coincided with the Scottish Enlightenment, Edinburgh’s dominance in art and literature, philosophy and science. Statues and monuments, reminders of the period, are all around the city. The toga-draped bronze of philosopher David Hume sits outside St. Giles: a location perhaps intended as retribution for his atheism. Economist Adam Smith’s tomb rests in Canongate Kirk’s graveyard. The larger-than-life-size white marble statue of Sir Walter Scott sits on the slope below Old Town. Behind, flower beds and lawn beautify what were the dunking grounds for witches. On the mound also, the impressive Scottish National Gallery, just one of many art galleries. The vibrant art scene explodes in August with the Edinburgh International Festival and the Fringe Festival. Even further downhill, in the historic port of Leith, the decommissioned Royal Yacht Britannica. Enjoy afternoon tea on one of five decks.

There are no direct flights to Edinburgh. In normal times.  WestJet flies to Glasgow, an hour train ride away.