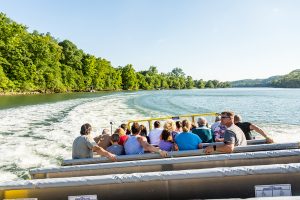 Branson is built on nostalgia. Seniors by the busload — and Winnebagos full of families — descend daily on this Ozark Mountains town, because of that
reverence for the past.

In many ways, this Missouri destination never left the‘60s.Jimmy Osmond (of Osmond Brothers fame) and a couple of Lennon Sisters (sweethearts of the old Lawrence Welk TV show) headline at a theatre named for yet another musical icon of the past, Andy Williams (“Moon River” was his biggest splash).The American Bandstand Theater — yes, that American Bandstand, where teens danced to records Dick Clark introduced — features the music of everyone from Elvis Presley to Tina Turner. Jim Stafford, whose “Spiders and Snakes” topped country charts back in 1974, is a permanent fixture, too. Even stars just passing through are well past their heyday: Frankie Avalon, Wynona Judd, B.J. Thomas among them. There are cornball comedians, Chinese acrobats, magicians and musical theatre, too.

None of it is cutting edge, and that suits visitors just fine. Branson boasts four dozen theatres, with more seats than Broadway. Programming begins as early as 10 a.m., allowing folks to hopscotch across three shows a day. 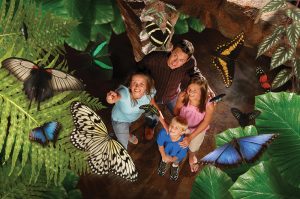 Between shows, visitors can dine at more than 250 restaurants catering to many culinary traditions, though comfortable American fare, such as barbecue and southern biscuits with gravy, seems most popular. Those visitors can sleep in the whopping 20,000 rooms in town, ranging from discount roadside motels to the luxe Chateau on the Lake Resort.

But tourism truly took off thanks to clergyman Harold Bell Wright, who wrote “Shepherd of the Hills,” a moralistic melodrama set in the Ozarks. Said to be the first U.S. novel to sell a million copies, it sparked visits. Three film versions of the story, including one starring John Wayne, fostered even more. By 1960, an outdoor production of the story was on offer; it continues, from May to October, on a stage the size of a football field.

That pageant set the tone for most of the attractions that followed, built on three pillars that seem to reflect the worldview of the local citizens themselves: God, family and country. 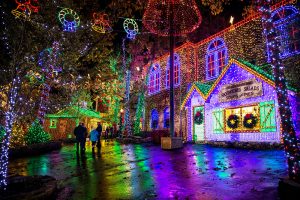 You know you’re among God-fearing folk on the drive south along Highway 65. Just a couple of miles before Branson is a 218-foot cross high on a hill, erected in 2018.According to builder Kerry Brown, it’s meant to battle the War on Religion. But Biblical teaching crops up unexpectedly around town. Among the shelves of two million toys at the World’s Largest Toy Museum complex, you’ll find Barbie dolls, toy trains, BB guns — and scripture verses tucked here and there. A faded magazine clipping by the entrance of a classic downtown diner, Farmhouse Restaurant, proudly announces that the owners “have given their business to the Lord.” No concert I caught during a recent visit
failed to feature a segment of familiar gospel hymns.

Upon this is layered a reverence for family. Attractions cater to all ages. There’s four-season snowtubing and zip-lining at Wolfe Mountain. Animal parks offer live butterfly shows and petting zoos. Museums are devoted to fishing, toys, farm tractors, moonshine, even the Titanic. That last one, about as far from an ocean as possible, nonetheless boasts a stunning array of artifacts; its owner co-led the 1987 Titanic expedition.

Arcades promise “adventure for all ages.” A place called Grand Country offers an Amazing Pets show. Jet boats tour man-made Lake Taneycomo, one of the country’s top trout fishing locales. Vintage trains run scenic tours. Fritz’s Adventure lets kids work off excess energy with everything from ropes to climb to tunnels to clamber through; kids-at-heart have the chance to “fly” over an outdoor vertical wind tunnel. 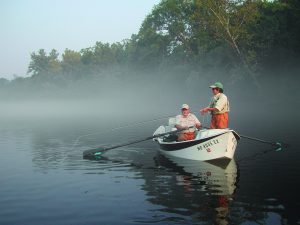 But if there’s one attraction to see ,it’s Silver Dollar
City, a sprawling theme park of 1880s-era shops, complete with costumed craftsmen; modern rides, such
as the $26-million Time Traveler, the world’s fastest,
steepest and tallest spinning roller coaster; and the
park’s original tourist draw — that labyrinthine Marvel
Cave, full of waterfalls,secret passages and impressive
rock formations. Of course, even here God is present:
at the bakery,where“Give UsThis Day Our Daily Bread”
graces a sign above loaves of whole wheat and rye; at
the 12-day southern gospel picnic each summer; and,
most spectacularly, at the Old-Time Christmas, which
begins right after Halloween and sees six-and-a-halfmillion lights,many given over to proclaiming the true
meaning of the holiday.

Branson is also a hotbed of patriotism.At concerts,
such as the lively lunchtime revue aboard Showboat
Branson Belle, the cast takes time to salute the armed
forces.Veterans stand,are thanked for their service,then
entertained with songs from various wars.The salute
may go deeper, as when Andrea Brett recites a poem
drawn on experiences of veterans she’s met; that’s at
the Dick ClarkTheater.TheVeterans Memorial Museum
relates the story of every U.S. conflict from World War
One on, with 2,000 artifacts displayed around the
theme of “honor, courage and American freedom.”At
College of the Ozarks,tours stop at Patriots Park,where
memorials include those to Missouri’s Gold Star families
and to the GlobalWar onTerrorism.The college,widely
known for a superb Sunday brunch, even has a Vice
President for PatrioticActivities. 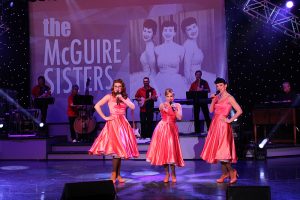 But for patriotism at its finest, nothing beats the
week leading up to November 11. Branson offers
America’s largest Veterans Day celebration with
reunions for prisoners of war and veterans of various
conflicts, free lunches and entertainment for veterans
and their families, a military film festival, parades and
wreath-laying ceremonies.

Branson begs comparison with LasVegas.Both are
towns pretty much in the middle of nowhere. Both
have burnished their image to a crystalline sheen and
attract droves of visitors as a result. In almost every
particular, of course,those brands are polar opposites.
Vegas, decidedly adult, is built for sin.There’s a reason its slogan is“What happens inVegas
stays in Vegas.” What happens in
Branson, on the other hand, is
worth sharing with Grandma and
granddaughter and neighbour alike.

And therein lies its magic: that
power of consistency to keep a
visitor coming back, guaranteed to
find comfort in a more innocent
time. 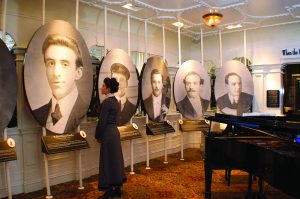 If you go…
The official tourism office website is explorebranson.com.
United Airlines offers service from Ottawa to Springfield-Branson
airport through Chicago.Those driving from Ottawa,more than 2,000
kilometres away, would likely make Branson part of an extended road
trip,perhaps heading south from Thunder Bay or Winnipeg.
Some guided bus tours depart from Ontario to Branson each year.
Consult such operators as OttawaValleyTours,CustomWorldVacations
(Toronto), or CardinalTours (Peterborough).
Note:COVID has placed restrictions on most travel.