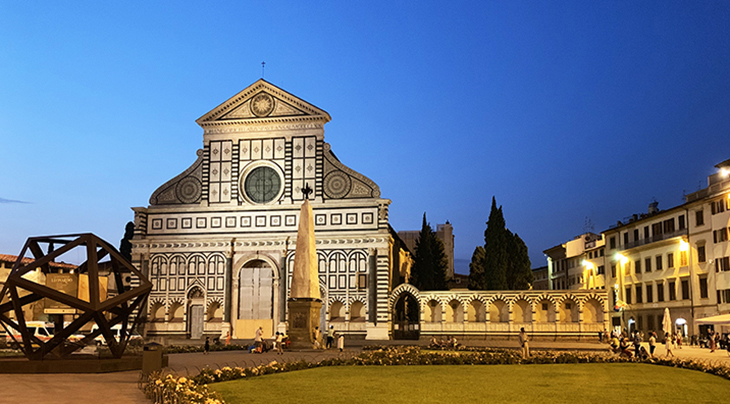 No visit to Florence would be complete without seeing it’s most beautiful and historically significant churches, all crammed to the rafters with works of art created by the likes of Michelangelo, Botticelli, Giotto, Donatello, Ghirlandaio, and others.

These six important medieval churches of Florence date back to the 1200’s (or earlier), and many have been featured in modern-day films and television series.

I recently stayed briefly in Florence when touring the city, I was struck by how often the outside of a church was a stark contrast to the inside, with great works of art housed in a very modest building, or the opposite – an impressive and extremely ornate exterior, giving way to an elegant and more spare interior.

The Basilica di Santa Maria Novella was the first great church built in Florence. Construction began on it in approximately 1249, and it was completed in the 1300s.

The current facade of the Santa Maria Novella basilica is of white and green inlaid green marble of Prato (also called ‘serpentino’ marble) and was built in the 1470s. This magnificent Dominican church dominates the Piazza di Santa Maria Di Novella named for it. 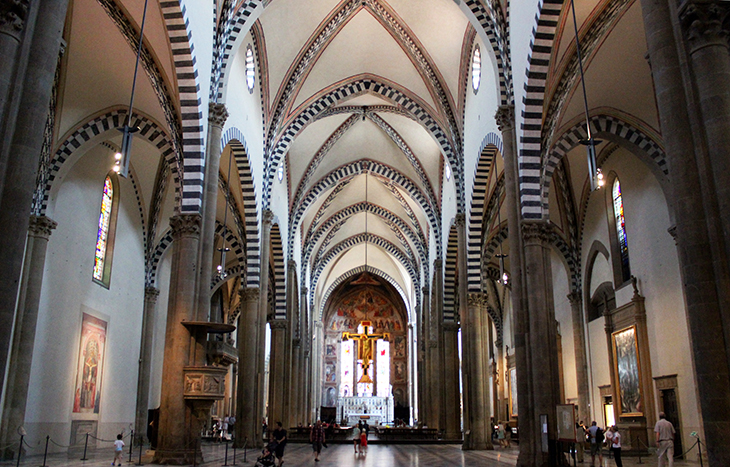 The inside of the Santa Maria Novella Church is in keeping with the exterior, down to the continuation of the serpentino green and white marble. Numerous chapels line the side walls of the church, and the church is adorned with carvings, sculptures, and frescos by artists such as Botticelli, Brunelleschi, Ghiberti, and Pisano. Domenico Ghirlandaio also contributed frescos to the Santa Maria Novella church and is buried here. 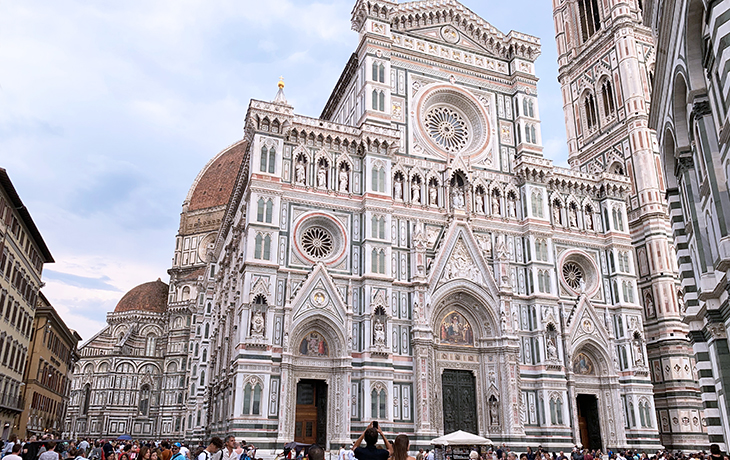 Construction of the medieval Gothic style Florence Cathedral on PIazza del Duomo began in 1296 and was (structurally) completed by 1436. The exterior pink, white, and green marble facade and decorations on the basilica were not completed until 1887. 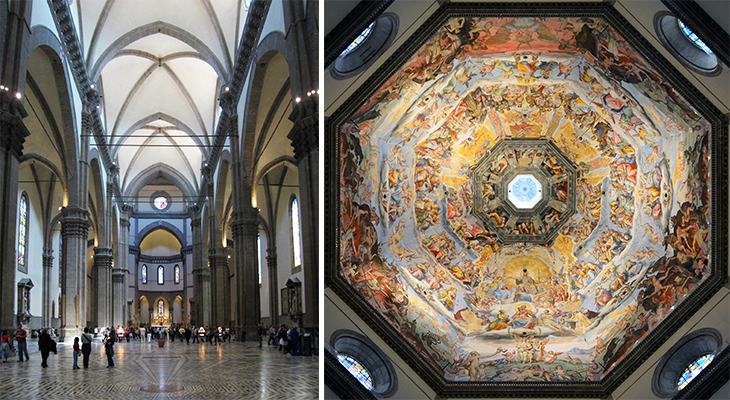 Aside from the elaborate mosaics/paintings on the interior of the dome, the inside of the Florence Cathedral is a much more restrained design than the rather gaudy exterior would lead you to expect.

Located in or under the Florence Cathedral and the burial places and tombs of notable figures from history, such as Renaissance architect and engineering designer of the Dome, Filippo Brunelleschi. 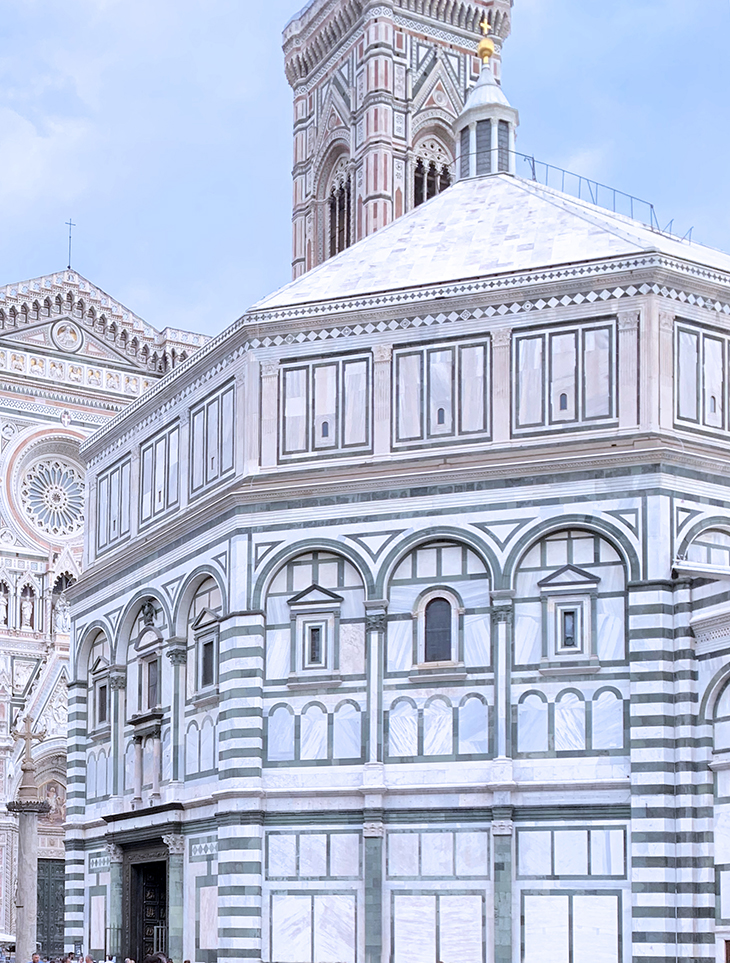 Made of green and white marble, similar to the churches of Santa Maria Novella and San Miniato al Monte, it’s considered to be a minor church on it’s own.

During the 1st century AD, there was a Roman wall across the piazza. In the late 300’s/early 400s AD, an early Christian octagonal Baptistery stood on the same spot and was replaced by another baptistery in the late 6th century.

The current Florence Baptistery was built in 1059, with enhancements made in later centuries that included 3 stunning bronze doors created by artisans Andrea Pisano and Lorenzo Ghiberti between 1345-1422.

Inside, a magnificent mosaic ceiling depicts various scenes from the life of Christ and Saint John the Baptist. 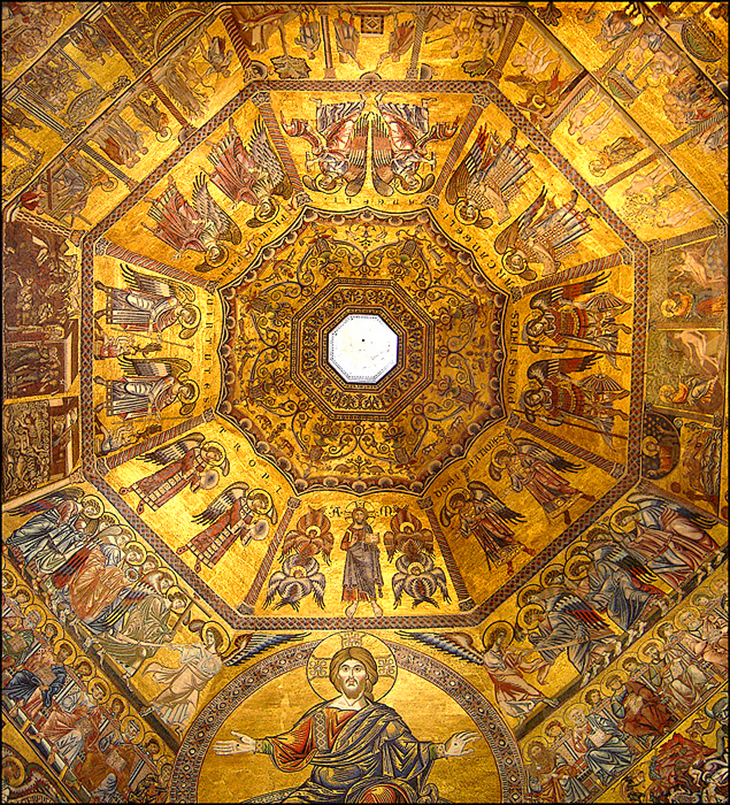 Renaissance artist Bernardo Daddi’s 1342 painting shows the Florence Baptistery is in place in front of the Florence Cathedral main entrance, which did not yet have a dome or completed external facade at that time. 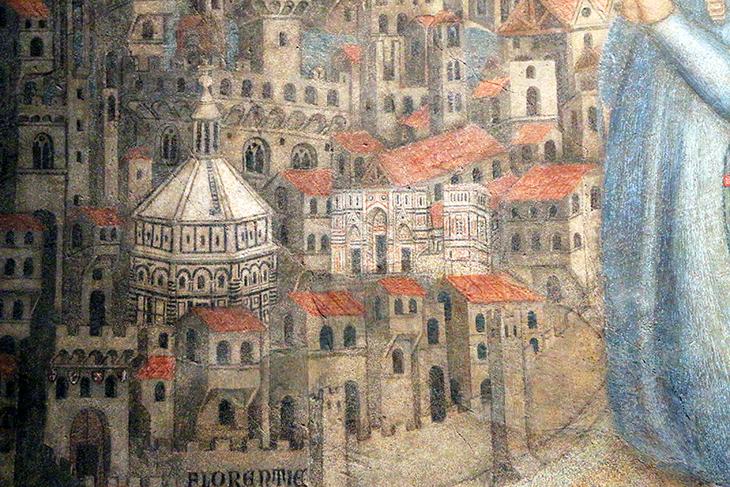 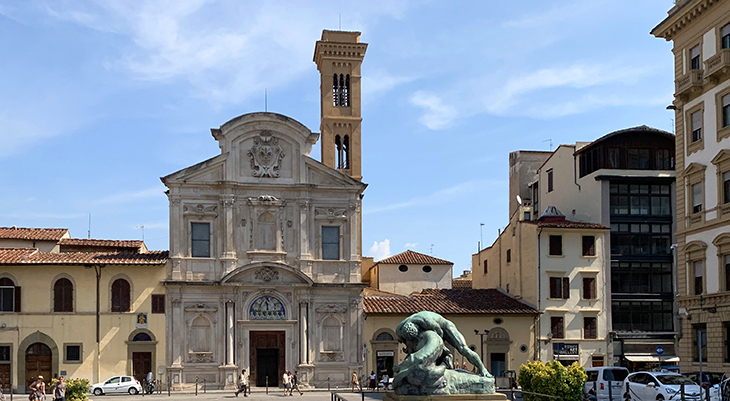 Compared to other, much larger churches in Florence such as le Duomo and Santa Maria Novella, the exterior of the Chiesa di San Salvatore di Ognissanti is simple and modest. Our local guide took us inside, and we were taken aback by the quantity and quality of sculptures, paintings, and frescoes adorning the walls and ceilings of this church. 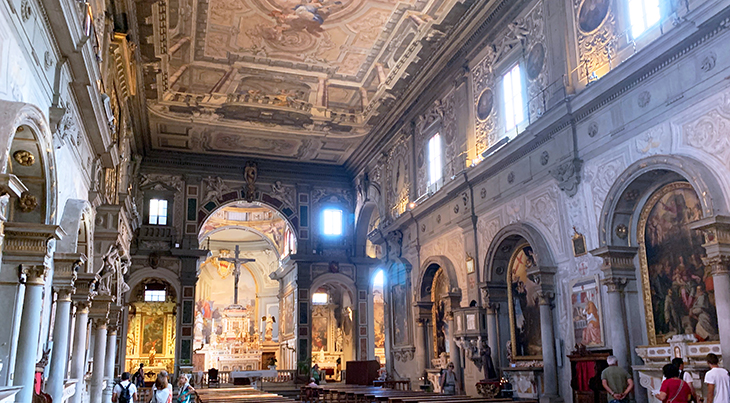 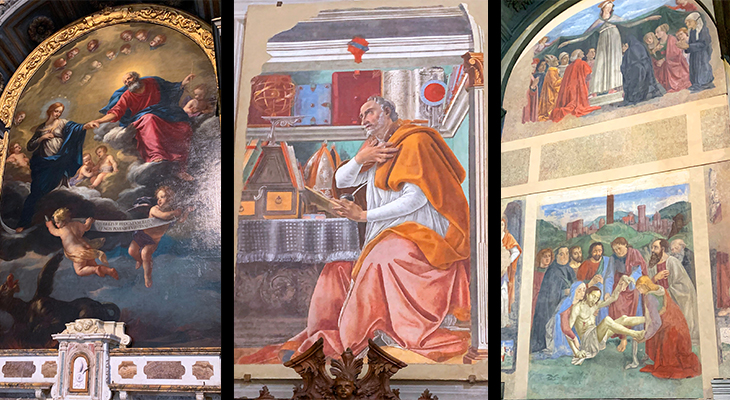 The centre panel above, is a painting of Saint Agostino by Florentine artist Sandro Botticelli c. 1480. On the right is “Deposizione” by another local painter,  Domenico Ghirlandaio (c. 1449-1494). 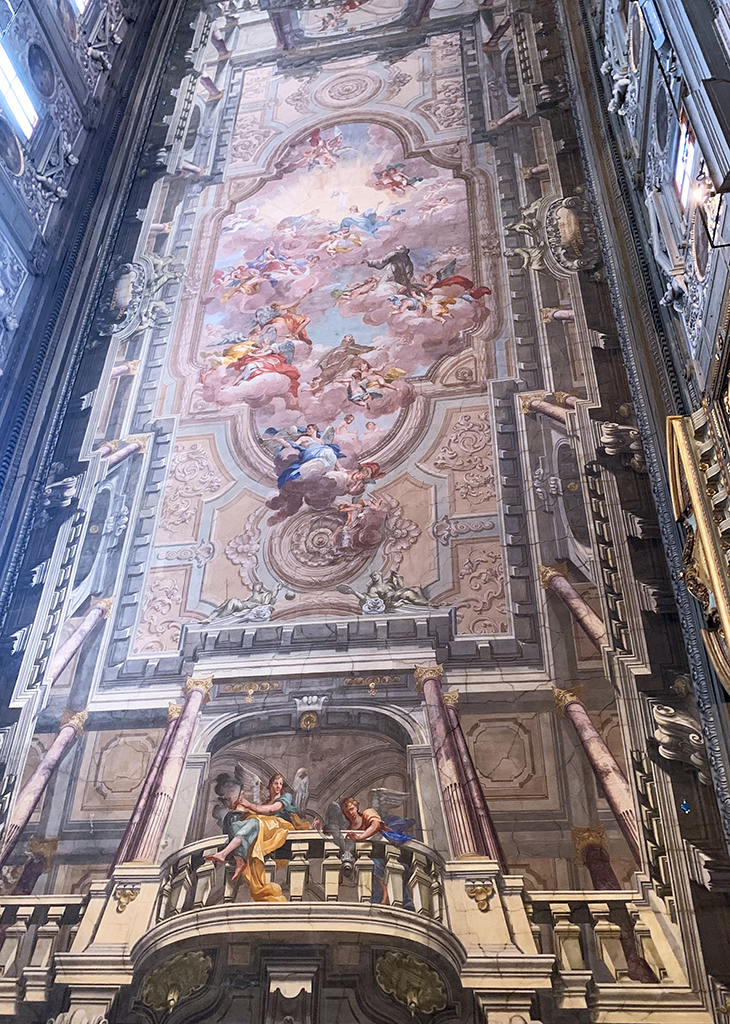 Artist Giuseppe Romei painted the Glory of St. Francis trompe-l’oeil fresco on the ceiling of the church in 1770. Romei, Botticelli and Ghirlandaio each contributed other paintings and frescoes to the church. Botticelli’s family attended the Ognissanti Church, and he was baptized and buried there (a location now built over by the church). Ghirlandaio was buried at another local church, Santa Maria Novello.  According to the Museums of Florence website, the Franciscan order that took over the church from the Umiliati in the 1570s built two new cloisters. Comprehensive renovations including new altars, paintings, and sculptures were done to Chiesa di Ognissanti in 1627 in the Baroque style, and a new facade was erected in 1637. 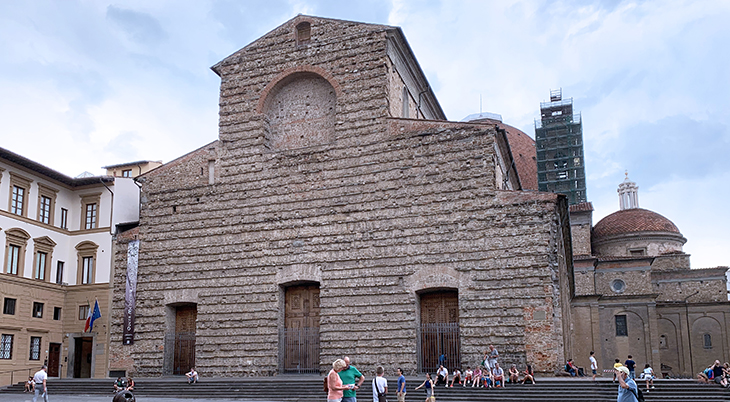 The San Lorenzo Church was the main burial place of the wealthy Medici family from the 11th century until the 1700s, and although it may look unimpressive outside, the inside is a different story.

Michelangelo was commissioned by the Medici family in the 1500s to design a new interior and external facade, and although his plans for the facade were never completed, the inside was. 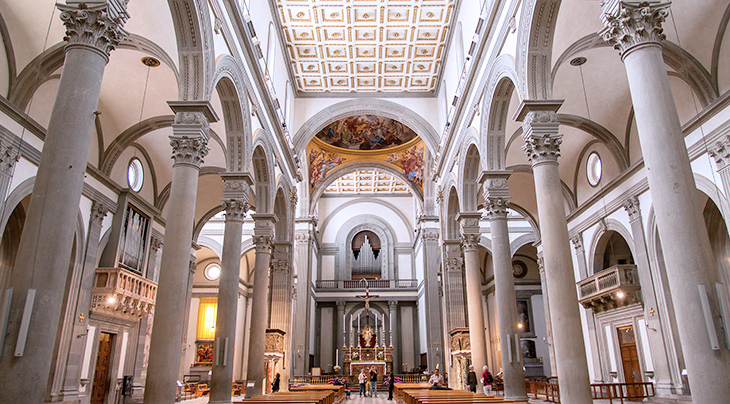 The elegant marble interior of the San Lorenzo Church is stunning. In addition to the many members of the Medici family buried at San Lorenzo, the Florentine sculptor Donatello is buried here.

Medici (2016-), an English-language Netflix series set in Florence, boasts a large cast playing characters right out of the city’s history – Richard Madden as Cosimo and Dustin Hoffman as his father Giovanni de’ Medici in the first season, while Daniel Sharman stars as Lorenzo de’ Medici and Sean Bean as Jacopo de’ Pazzi in later seasons. Medici has filmed at numerous locations across Tuscany, many right in Florence itself, including San Lorenzo Church, the Cathedral of Santa Maria del Fiore / le Duomo, and the Baptistry. 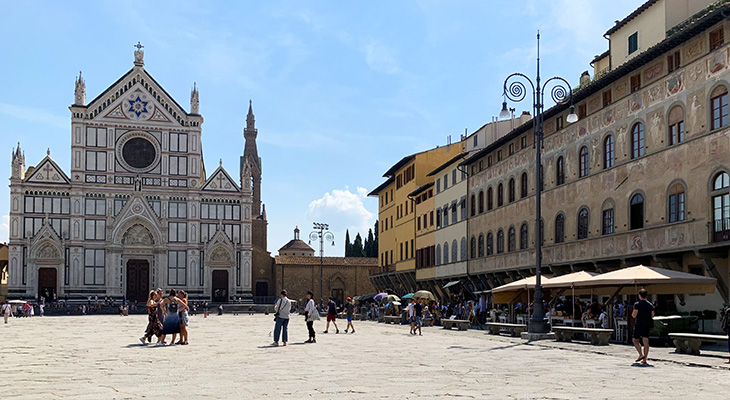 Our tour guide advised us that it is because of Matas, that a Jewish Star of David adorns the very top of the Roman Catholic Basilica di Santa Croce facade.

In front of the church is a monument to the poet Dante Alighieri sculpted in 1865, and along one side of the piazza is the frescoed medieval Palazzo dell’Antella, with shops and restaurants on the ground floor and luxury apartments above. The frescoes date back to 1619-1620.

Calcio fiorentino / calcio storico, a historically violent game sometimes compared to football or rugby, originated in the Piazza di Santa Croce. In the past sometimes bulls were released to add to the confusion. It’s still played in this plaza each June by teams representing different sections of Florence. The Netflix Medici series referenced above features a game of calcio in an episode from the first season. 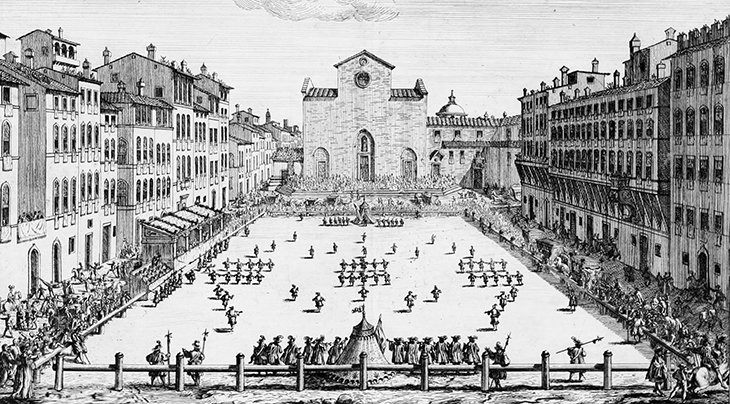 Note the differences in the facade of the church as depicted in this 1688 sketch, with the new facade erected in 1857; large tents as seen here at either end of the piazza would have served as goal posts for a game of calcio. 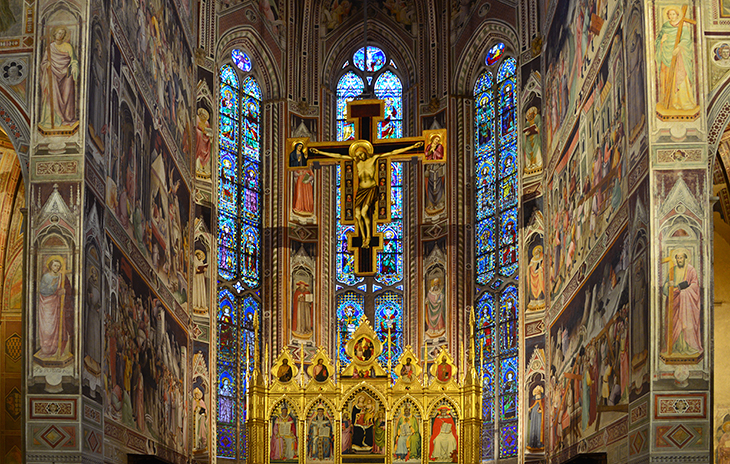 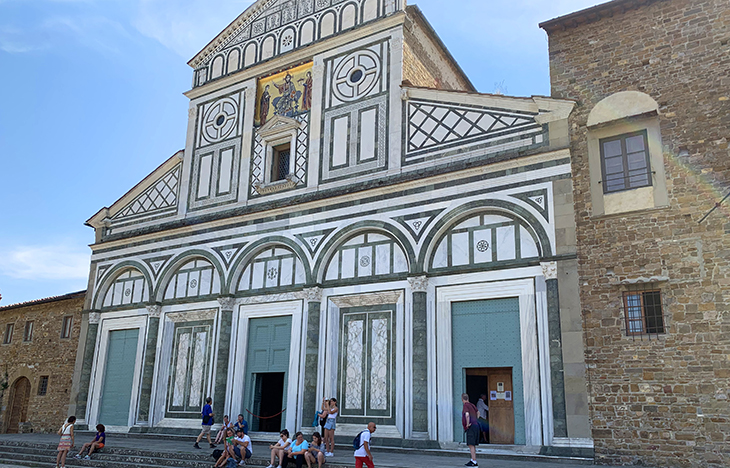 The Romanesque San Miniato al Monte Basilica at the top of the hill above Piazzale Michelangelo, was built in 1013. An earlier adjoining Benedictine Monastery, has been an Olivetan Monastery since 1373. 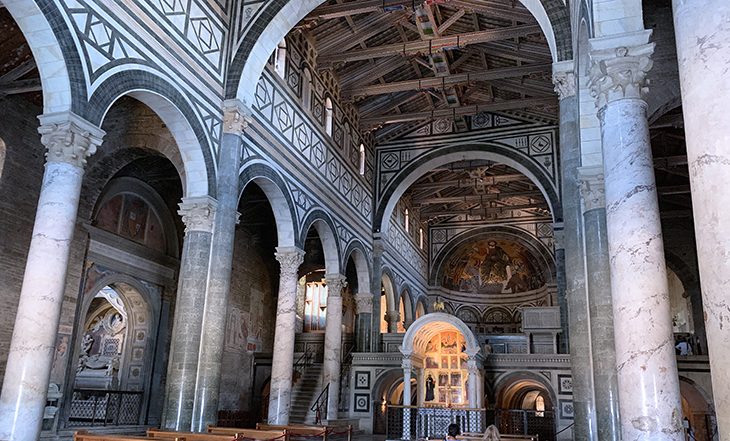 Agnolo and Taddeo Gaddi, Michelozzo, Luca della Robbia, and other artists contributed to the frescos, paintings, and sculptures decorating the inside of the San Miniato Church. A Chapel is dedicated to the James of Lusitania, Cardinal of Portugal, who died in 1459 and is buried here; in the Cimitero Monomentale Delle Porte Sante behind the church is the final resting place of  The Adventures of Pinocchio (1883) author Carlo Collodi, a native of Florence.

A few movies have filmed at the San Miniato Church:

Up at the Villa (2006), a period drama set in Florence & Tuscany with Kristin Scott Thomas, Sean Penn, James Fox, and Anne Bancroft. Florence film locations for Up at the Villa were the Basilica di San Miniato al Monte, Orsanmichele Church, and streets around Piazza della Signoria and Uffizi Square.

If you enjoyed this article and want more about these locations and Florence, Italy, you may also like Buona Sera, Firenze: Touring Florence.

Anita Hamilton is an editor and writer at 50+ World, and you can follow her articles on Facebook.