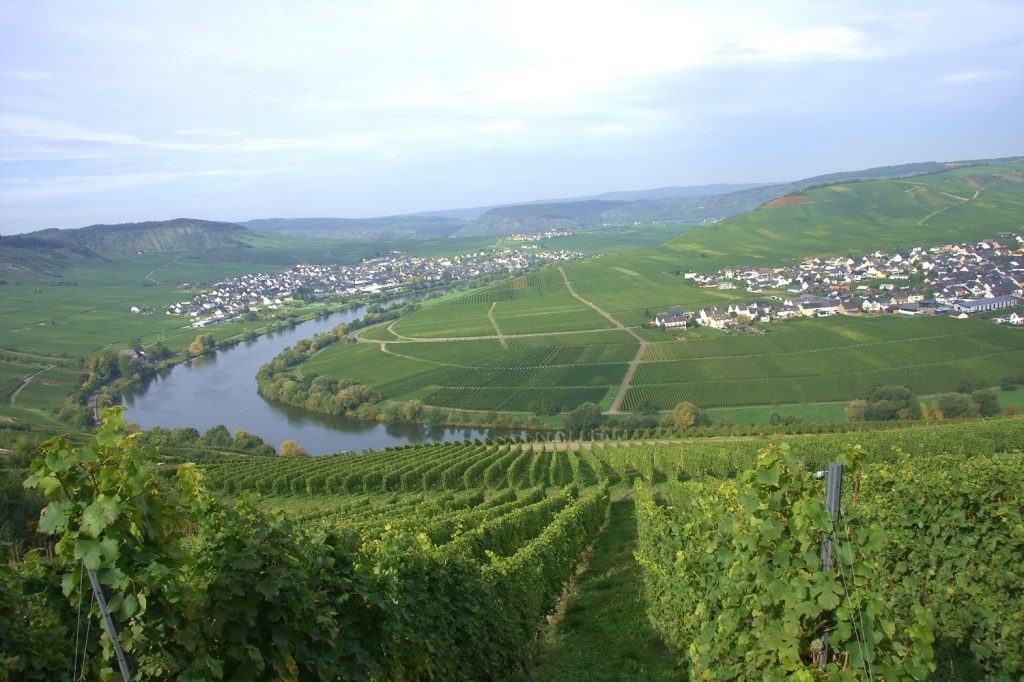 The Mosel River meanders through a valley bypassed mainly by progress. Vines cling to steep hillsides that plunge to the river. Between vineyards lie medieval towns, castles and remains of the Mosel Valley’s Roman heritage.

Our trip began in Trier, Germany’s oldest city. Founded by Emperor Augustus as the capital of Rome’s Western Empire in 16 BC, Trier hosts the largest collection of Roman structures outside of Rome. Porta Nigra, the massive blackened Roman gate with two passageways and 144 windows in the upper stories, looms over the pedestrian main street. Downtown is a picture book of architectural history, a mix of Renaissance, Baroque and Gothic buildings, half-timbered houses and churches. Trier’s cathedral was created with walls dating from the 4th-century reign of Emperor Constantine. His mother, according to legend, contributed many of the relics now displayed in the cathedral’s treasury, including one of the four nails used to nail Christ to the cross. 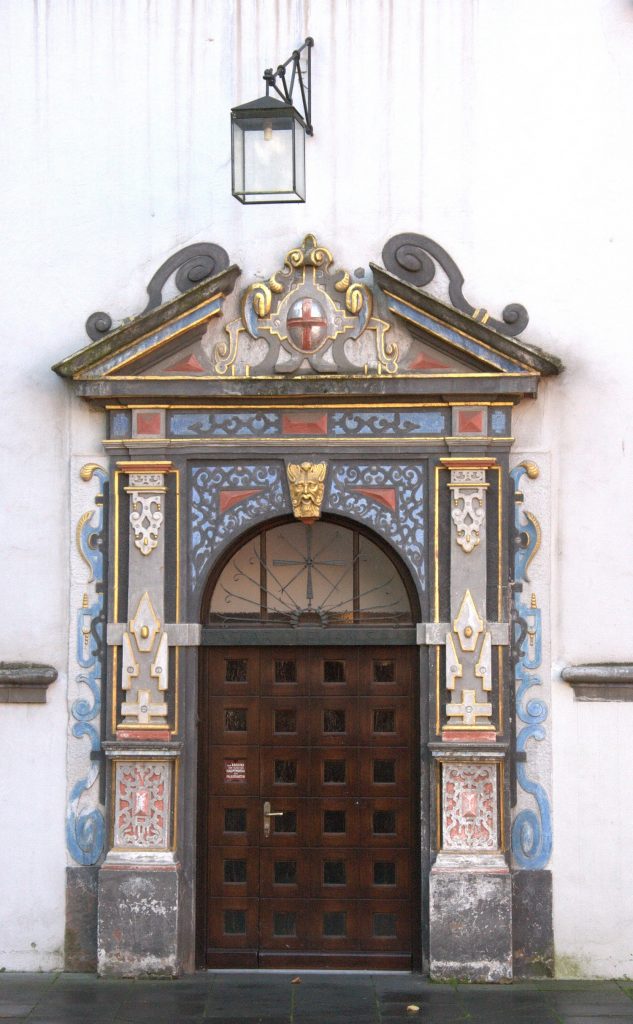 A Lutheran Church occupies the Roman Imperial Throne Room. The largest surviving room from antiquity, the brick-walled Basilica of Constantine, measures 27 metres wide, 67 metres long. Niches in the apse indicate the locations of the thrones. In 1761, Trier’s archbishopelector added onto the Basilica. Topped by a half-naked Venus and pagan gods above the doorway, the deep pink Rococo-style Electoral Palace shocked the townspeople. The intended occupant died before moving in. His successor disliked the style. Instead, he ordered a much larger classical-style palace to
be located in Koblenz, the city where the Mosel flows into the Rhine, 130 kilometres away. Imperial baths from Constantine’s time occupy spacious grounds on the edge of downtown. The largest
Roman baths outside of Rome included warm and cold baths and a sports ground. Computer animation within the remaining walls gives a glimpse into its past use. Bloody fights between gladiators and animals drew over 20,000 spectators in AD 100 to the Roman Amphitheatre. More sedate entertainment now brings audiences to the three-tiered theatre. Some Chinese consider their visit to Trier as a pilgrimage to honour Karl Marx. He was born in an elegant Baroque house with French gardens in 1818. Although Marx’s father converted to Lutheran, the Nazis still considered the family Jewish and destroyed everything inside. Funding from French communists helped restore the house. Exhibits trace the life of Marx, although Chinese visitors refuse to believe Marx had an illegitimate son, according to our guide. Mrs. Elke Hermsdorf-Hubertz says, “To them, he was a saint. They leave flowers by his statue.” 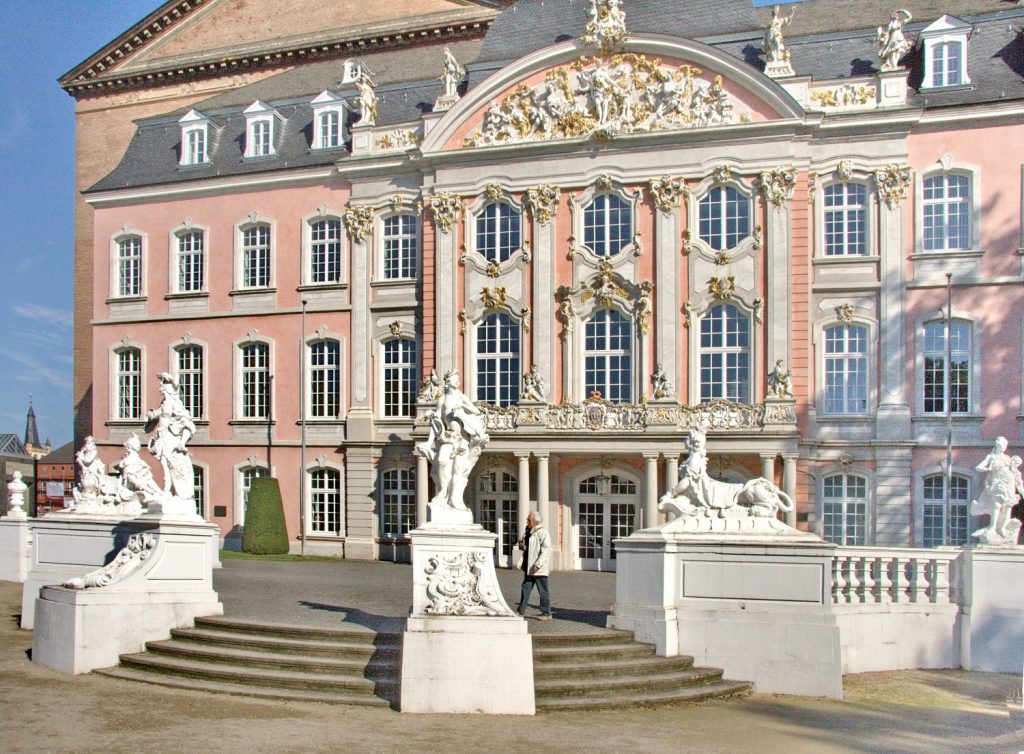 The Mosel River begins in the mountains of France, runs into Germany and northward towards Luxembourg until flowing into the Rhine River by Koblenz. The valley’s sheltered geographical location and highly decomposed slate soil makes it ideal for Riesling vines. Wineries are predominately small, generations-old family-run enterprises. Some have formal tasting rooms. Others
offer tastings in extensions of the family home. Four months before harvest season, a ring of flowers above doorways signifies the house is now a restaurant. In the town of Leiwen, the Weis family
winery, St. Urbans-Hof, belonged to the man who introduced Riesling grapes to the Niagara region. Herman Weis planted 17 hectares of Riesling vines in 1979 to what later became Vineyard Estates. He returned to Germany to the winery now run by his son, Nik Weis. His daughter, Anne, is part of the Cave Springs family winery in Jordan, Ontario.

Meandering through the Mosel Valley is to see time slipping backwards to villages barely changed over the centuries. Ruins of a hilltop castle overlook medieval timber-framed houses in Bernkastel-Kues, evoking a scene straight from a fairy tale. In front of the Renaissance-style City Hall, a pillory once kept petty criminals locked in place for up to four days. People could throw anything at them. Carvings of fish scales on the exterior walls were believed to protect houses from lightning. Asymmetrical windows were meant to confuse ghosts. Constructed to shelter paupers, the 663-year old St. Nicholas Hospital is now a retirement home. The Vinothek lets you train your smelling and tasting senses on any of 160 wines in the vaults. Adjacent is the Mosel Wine museum. 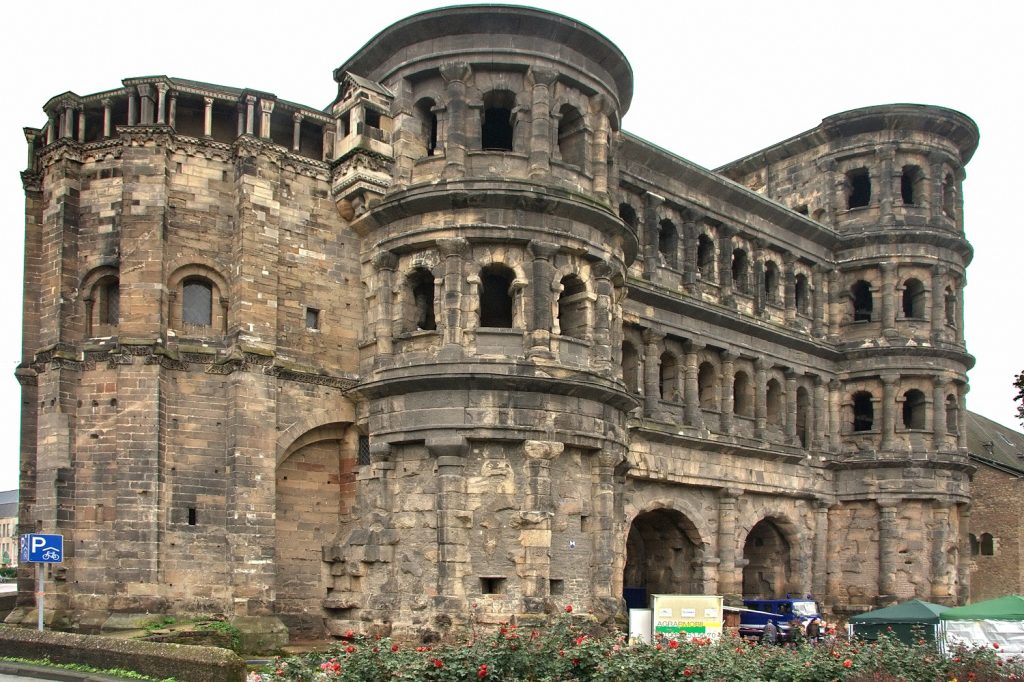 The Belle Époque era lives on in Traben-Trarbach through its Art Nouveau architecture. A style evident even in the bridge erected in 1904 when the two towns on either side of the Mosel amalgamated. The house topping the bridge was both a restaurant and tool booth. It remains a restaurant. Once Europe’s second-largest wine trading centre after Bordeaux, the town attracted wealthy wine merchants who wanted villas in the style of the time. Art Nouveau mansions with facades dominated by Japanese patterns and geometric ornaments remain privately-owned. Situated on the banks of the Mosel, the Romantic Art Nouveau Hotel Bellevue is easily recognizable by its tower reminiscent of the neck of a champagne bottle, including the cork and the wired latch. Little has changed over the past 118 years. Bare bulbs in light fixtures, which demonstrated to guests that the hotel had electricity, remain uncovered. The Parisian-style Art Nouveau bar, Belle Époque restaurant and the dark wood lobby’s blue and green-coloured stained glass windows harmonize with the town’s distinctive style. High on the east bank of the river, the remains of the 14th-century Grevenburg Castle. On the opposite bank, the ruins of Montroyal, a late-17th-century fortress built by Vauban for the invading Sun King, Louis XIV. 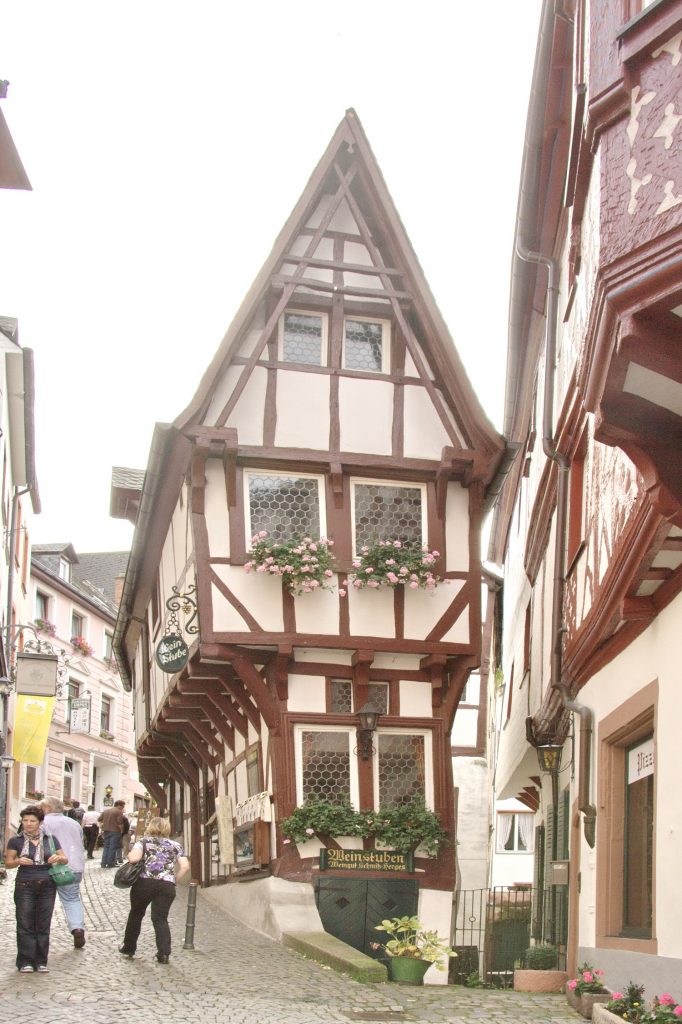 The second-largest city on the Mosel River after Trier, Cochem is sandwiched between nearly vertical vineyards. Terraced land, so steep monorails travel between rows. Only four houses remained after the French burned the city and slaughtered half the population in 1689. Slowly, the impoverished town was rebuilt. In the 1800s, Cochem became a popular tourist destination, thanks to paintings by such British artists as J.M.W. Turner. A Royal Customs Town until 1924, the city’s cobbled alleys wind past city walls to small squares bordered by black and tan guild houses. Crazy-looking faces on one building facing City Hall reveal one opinion about city councillors. On a hilltop 91 metres above Cochem, Reichsburg Castle. Henry XIV’s army destroyed most of the castle. Privately restored in 1890, later confiscated by the Nazis for a law school, the complex now belongs to the city. Guided tours tell tales of knights and medieval life through Renaissance and
Baroque furnished rooms. A 181-kilogram boar’s head looms over the Hunting Room. To keep evil away, touch the red belly of the mermaid flying from the ceiling of the Norman Room.

Deep in forested hills above the valley, 24 km from Cochem, is the more authentic Castle Burg Eltz. Massive towers and turrets rise high above the 1000-plus-year-old castle inhabited by the same family for 33 generations. The owner and his wife spend two weeks here each summer. Gilded drinking cups, jewellery and Hungarian-costumed mannequins fill the Treasury. Flemish and French tapestries line rooms of Baroque furniture, knights’ armour and medieval weaponry. The Mosel ends at Koblenz, where Europe’s second-largest preserved fortress overlooks the meeting of the Mosel with the Rhine. Reach it by cable car over the Rhine.

If you go
The nearest airports are Frankfurt and Luxembourg.

Getting around
A paved, mostly flat and winding cycle path paralleling the Mosel makes for an easy bike ride. You can also travel by train, bus or boat. We rented a car from Frankfurt airport. Tour Trier by Segway. Weekend Seg & Wine Tours end in time for dinner at a local winery. segworks.de/touren

Where to stay
Romantic Art Nouveau Hotel Bellevue at bellevue-hotel.de