Explore the region without leaving home 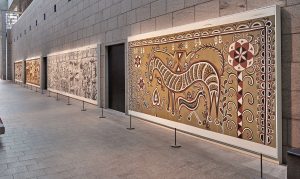 I cross a wooden bridge and enter the battered doors of Kingston’s Murney Tower. It’s a squat, round structure, built to repel Americans during a tense 1840s dispute over our western border with the United States (President James Polk famously said“54- 40 or fight”).

Inside I admire the thick limestone walls, seemingly impenetrable. I study the broad range of artifacts on display: a white pith helmet worn by the Kingston regiment until 1907; simple wrought iron folding beds that look torturous, but could be stowed each morning; 19th-century household items, including lamps, dresses, suitcases, dishes.

I learn the tower offered Kingston three lines of defence against attacks from the west. On the top floor: a three-ton Blomefield cannon — so massive that it took seven men to maneuver it. But it could hurl 32-pound cannon balls almost two kilometres and shoot hot ammunition that would set ablaze wooden warships plying Lake Ontario. On the middle floor: four cannonades to defend against enemy forces who made it ashore. And on the bottom level: several rooms with slits from which riflemen could shoot enemies who got past the first two deterrents.(I learn aim was poor, but  bullets ricocheted off walls until they hit something, hopefully a foe.) I learn, too, that the tower was never attacked.

The kicker: I do all this from the comfort of home. 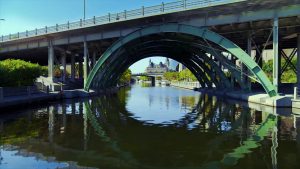 At times you get the itch to explore, but can’t. It may be a chronic health problem that keeps you in, or lack of transportation, or something like a pandemic. In times such as these, what can a curious trekker do? Thanks to the online world, become a virtual trekker.

The coronavirus pandemic spurred many tourism businesses, including those in our region, to muster travellers’ interest by mounting virtual tours.

“Since COVID-19, everybody and his dog is doing a virtual tour of some sort,” says Laura Byrne Paquet, who edits a popular website, Ottawa Road Trips, which she established in 2014. Some are fairly simple, she notes — perhaps nothing more than text and photos. Others might station fixed cameras to share in real-time what’s happening at a specific spot or mount a slide show of photos with voice-over commentary. The most sophisticated, such as the Murney Tower site, offer 360-degree tours that users control with their computer mouse.

“They may not be as good as being there,” Byrne Paquet says, “but they’re a pretty darned good substitute. Local destinations are doing a really inventive job.” Virtual tours even have advantages over a real visit, she adds. They’re free, accessible anytime and help users decide if they’d like to visit in person.

But she warns, they can also suck up a lot of time. “The other day I came across the term ‘paternoster lift,’” she says. “So, I Googled it and spent a half-hour learning about something I’d never heard of before.” (For the record: they’re elevators made of a chain of open compartments that slowly loop non-stop up and down inside a building, so passengers can step on or off at any floor they like.) 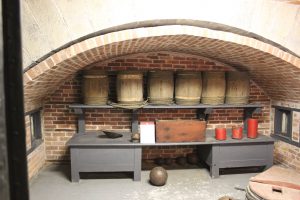 The tours aren’t all about history. Cultural and outdoor attractions beckon online, too.

We first took granddaughter Simone to the National Gallery of Canada when she was three. She was immediately enchanted with Janet Cardiff’s masterpiece,40 Part Motet. Simone instinctively paid the historic Rideau Chapel, in which it’s housed, her reverence. She had fun tottering among its 40 loudspeakers, listening to one distinct voice from each. She laughed when the choristers whispered or coughed during intermission and enjoyed the 16th-century music — at least for a minute or two. It’s been a stop on every Gallery visit since.

But I never knew the whole performance is three hours long. I didn’t know children sing the soprano notes, while adults perform the rest. I didn’t know eight quintets are involved.

That’s the sort of detail I learned one afternoon visiting the Gallery virtually. Curators introduced me to other iconic works: Tom Thomson’s famous Jack Pine, for example, and Gustave Klimt’s Hope I, and Annie Pootoogook’s Cape Dorset Freezer. In each, the commentary helped me see the art more fully.

One section reproduced a dozen paintings of gardens, introduced by an art historian who once headed the Royal Botanical Gardens. Another gave an overview of Àbadakone, an exhibit of contemporary Indigenous art I’d missed before the exhibit ended. A 40-minute video let me tour parts of the Gallery the public rarely sees. And new videos are added frequently, to keep me coming back.

By the end of the four-hour cruise, I’m drowsy but content, my normal state after a few hours on water. But this time I can’t credit fresh air or gentle waves. This cruise is online. 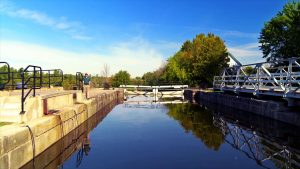 There’s no voice-over, though occasionally a few words pop up on screen for context. You see and hear what the boaters experience: Mirror-like water thanks to a dead-calm wind. Cirrus clouds dotting a light blue sky. Waterfowl swimming, then fluttering out of our way. Leaves beginning to turn crimson along the shore, barely hiding stately homes with manicured lawns and cottages with their mandatory docks, Adirondack chairs and watercraft.

Occasionally, a dog barks. Frogs ribbet. Kayaks and canoes glide by — so close, we hear the paddles in the water. It all takes on a vivid fascination, and for someone like me who’s seen most of the canal only from shore, the perspective is eye opening. Only as we pass through the locks en route — four sets altogether — is my reverie broken. Lockmasters bid hello; they chitchat about such mundane things as how busy the canal is this glorious day.

If you visit:
For the experiences described above:
• visitkingston.ca/makers/together-at-home/explore-and-experience (scroll to Murney Tower to access virtual tour)
• gallery.ca/virtual-ngc
• tvo.org/tripping-the-rideau-canal
• ottawaroadtrips.com
Other virtual treks
Ottawa Tourism has links to a variety of online experiences (scroll to last two sections): ottawatourism.ca/en/media/story-ideas/ottawasresilient-tourism-community
Get up close with animals at Park Omega: facebook.com/pg/parcomegamontebello/videos/?ref=page_internal Go behind Niagara Falls or see it from the air: niagarafallstourism.com/vr/
Tour Montreal’s 850 public art pieces: artpublicmontreal.ca/en//collection Natural beauty, historic sites and more from Parks Canada: pc.gc.ca/en/multimedia/cartes-maps/sec02 Cross the border (safely) to northern New York: adirondackalmanack.com/2020/03/virtual-adirondacks-be-an-armchairtraveler.html