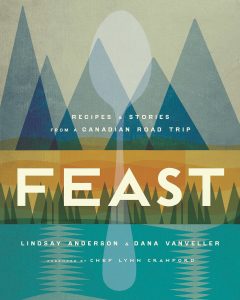 Discover Canadian cuisine and stories that are uniquely appealing, thanks to Lindsay Anderson and Dana VanVeller, a couple of foodies who just happen to also be writers and photographers. After meeting around a campfire in British Columbia, they became friends and embarked on a road trip to write about the food, culture and tales that so richly season our country. They covered 10 provinces and three territories for a total of 37,000 kilometres, and they brought us back more than 100 delectable recipes. About 90 of those recipes have been shared by chefs, grandmas, farmers, First Nations elders and other contributors who dish up a genuine taste of the regional gastronomy that is definitively Canadian. From the Maritime Lobster Rolls and Yukon Cinnamon Buns to the Reindeer Meatloaf and Cape Breton Butterscotch Pie, you’ll be delighted and anxious to get cooking.