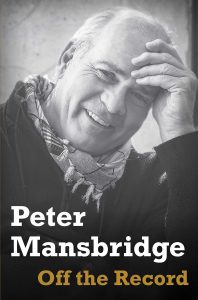 As the voice and face of CBC television’s The National for more than half a century, Peter Mansbridge reported on all the major news stories in Canada and around the world. As chief correspondent, he interviewed most of the world’s leaders and many other key personalities. He was also featured on the cover of Fifty-Five Plus magazine just as he retired from the CBC.

In Off the Record, he presents a series of anecdotes, key moments and memories of a lifetime in the public eye. Many of these backroom stories are of small incidents that, for various reasons, meant a lot to him. For instance, he writes about the phone message he received from one of his daughters, Pamela, then 28, following the horrors of 9/11 in 2001. She was calling to say she loved him. “My children, both away at university at that time, reacted the same way on that awful day, as did so
many families around the world.”

That, he writes, was “a crucial part of the story. Because what Pam did was happening everywhere. Daughters were calling fathers; mothers were calling sons; brothers were calling sisters; friends were calling friends. Reaching out. Comforting. Connecting. Telling each other, they loved them. What they’d seen had made them want to hug, hold close, and reach out to the people who mattered to them.” If this is the most poignant story in the book, others are revelatory of character—his and other people’s—and of what happens behind the scenes in the crisis-driven industry of broadcasting. He recalls, for example, how it was Justin Trudeau’s friend and then principal secretary Gerry Butts who fed him the “Because it’s 2015” line that was subsequently reported as evidence of Trudeau’s wit. He also
mentions Stephen Harper’s answer to the question of whom he had called first after the 2014 shooting on Parliament Hill. Harper answered that he had called his mother because he knew she would be worried. That, writes Peter, after having interviewed him several times over twenty years, was the first time he “sensed the real Stephen Harper.” There are lighter segments, such as the tale of his moment of fame as cartoon newscaster Peter Moosebridge in a Disney cartoon (important to him because it would please his grandchildren) or a trip to China when a language misunderstanding led to confusion between a hair restorative and an aphrodisiac.

Throughout, he maintains a careful balance between humourous moments—he has a delightful selfdeprecating humour—and serious issues, such as his deeply felt concerns about racism and his loyalty to his country. (He refused a lucrative offer from CBS in the U.S. early in his career, and, he says, it took him another 30 years to match the salary by staying in Canada.)

Many of the tales are followed by postscripts, giving additional details of the incidents or individuals involved, so adding further interest to the stories and backgrounds. With so many incidents, it is not surprising that some are less fascinating than others, but there is no doubt that readers will learn a little more about what goes on behind the scenes at CBC and collect an assortment of tidbits of information about a wide collection of the people that he has interviewed over the years, as well as learning a little more about the man himself.