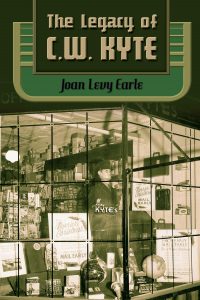 This is the story of the Kyte family business, founded in 1889 in Cornwall, Ontario, by C.W. Kyte, a newspaper pressman by trade but an entrepreneur in his heart. As Jack Earle approached middle-age — he yearned for independence. C.W. Kyte’s Stationers played a huge role in the blossoming of Cornwall. First established in 1889, it moved to a larger premise in the early 1900s, where it stayed until it was sold. The book is a fascinating chronicle of life in Cornwall and the people who helped build it through the years up to and including the purchase of the firmly established store by Joan Levy Earle and her husband Jack in 1988.The dream of C.W. Kyte was being continued. Joan and Jack renamed the store “The Sanctuary,” and it played a huge role in my decision to stay in Cornwall. Through Joan Levy, we learn her background, the origins of her store and how it played into the ongoing history of this Seaway city. It is a great read — combining a personal, historical, and factual picture of Cornwall, Ontario. (This review submitted by Lorna Foreman.)