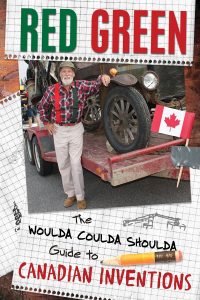 In The Woulda Coulda Shoulda Guide to Canadian Inventions, you’ll find out how to recreate the best Canadian inventions at home, with duct tape. Red Green (also known as Canadian comedian and writer Steve Smith) takes on everything from the hard-cup jockstrap and the Wonderbra to synchronized swimming, insulin and the walkie-talkie. And if you’re a fan of robotic arms, Red shows how you can produce a DIY Canadarm. All you need is a cordless drill, tape measure, broomstick, tongs, a bungee cord, a fishing reel and, naturally, more duct tape. From 1991 to 2006, Smith starred in The Red Green Show, a comedy that parodied home improvement, do-it-yourself, fishing and outdoor shows. As a handyman always trying to find shortcuts to his projects, on the screen Red Green trusted duct tape as “the handyman’s secret weapon.” In The Woulda Coulda Shoulda Guide, duct tape is still on a roll. The DIYer in your life will appreciate that.